Cincinnati Metro rider on COVID-related cuts to bus service: 'Change it back' 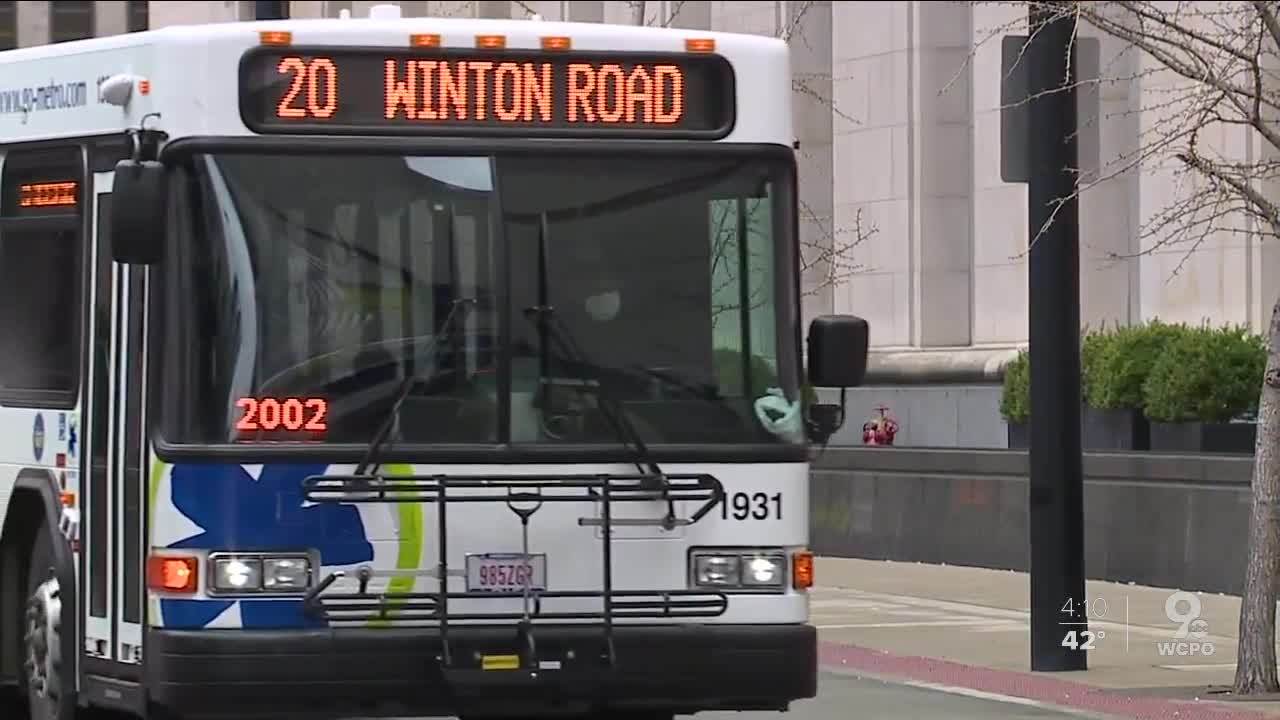 After cutting service due to the coronavirus pandemic, Cincinnati Metro buses are running on reduced schedules. For people who still rely on Metro to get to work, this creates a new challenge to their livelihoods.

CINCINNATI — As if dealing with the general stresses of the coronavirus weren't enough, Robert Willmoth of East Price Hill found himself facing an unrelated challenge just a few days into the pandemic.

His car was stolen.

"It was a red '97 (Pontiac) Firebird. It was a rare car," he said. Because his insurance didn't cover theft and he was still working as a welder in Spring Grove Village, he turned to Cincinnati Metro as the most affordable option for him to get to work.

Only a week after Willmoth began making his commute by bus -- just enough time for him to adjust to a new routine -- Cincinnati Metro announced it would reduce service to Saturday schedules on most local routes, including the two he relied on every morning.

Due to his early schedule, that meant Metro was no longer an option.

Like nearly every other industry, public transit has had to adapt as COVID-19 continues to spread across the region and the country. Metro ridership has plummeted since late March, now at roughly half of its typical daily ridership on local routes. That has hurt the agency's bottom line and resulted in a diminished capacity to operate at normal service levels.

In Willmoth's case -- and others who still have no choice but to rely on the bus for rides to work, the grocery or other essential trips -- Metro's struggle has trickled down and added to their own.

'Way out of my budget'

With buses running less, Willmoth had to pivot again and find a new way to get to work. He began hailing early-morning Lyft rides every day, and then catching the bus home in the afternoons.

"Cost me $15 a day, which is way out of my budget," he said. It also means he's had to face tough choices about how to spend his money. "Medications, or get to work... or eat, you know? It's as simple as that."

Willmoth's new financial constraint can be traced back to Metro's own budget problems. When Ohio Gov. Mike DeWine and Dept. of Health Director Dr. Amy Acton ordered the food service industry and retailers to shut down the majority of their operations, an unprecedented number of people who had previously been riding Metro to and from work everyday suddenly were not. Nearly 11,000 Cincinnati Public Schools students were not riding Metro buses in the mornings and afternoons, after DeWine ordered school buildings closed. Thousands who could do so began working remotely, after a stay-at-home order went into effect.

When they would normally carry about 40,000 riders every weekday, Metro buses were only seeing about 20,000 a day by late March. That has held steady into April, according to Metro CEO Darryl Haley.

"There isn't any route that's anywhere close (in ridership) to where it was the first week of March," Haley said at the March 25 Southwest Ohio Regional Transit Authority Board of Trustees meeting. The loss in fare revenue meant the transit agency had to cut down its level of service.

That led board members to vote to reduce most local routes to a modified Saturday schedule and suspend most express and commuter routes. Metro is operating with fewer buses running fewer hours each day, at 63% what it normally runs, Haley said.

Metro Vice President of External Affairs Brandy Jones said ridership dropped to the point where it was costing more to run some of the buses than they were generating revenue.

"We were having buses with just two or three people onboard," she told WCPO. "Our ridership dropped drastically."

During the time WCPO was interviewing Willmoth for this story, joining thousands of others across the region, he became unemployed due to the crisis. Without a car and with limited bus service, he now faces barriers to staying afloat, finding a new job and getting back on his feet financially.

"I'm sitting right here waiting on the 33 bus to go wherever I need to go," he said.

For the last two weeks, buses were running less, but Willmoth -- and all other Metro riders -- could ride for free. When the SORTA board members voted to reduce service, they also voted to suspend fare collection. The primary reason for doing so was to allow passengers to board using the buses' rear doors in order to prevent riders and operators from coming in close contact at the fare box and possibly transmitting COVID-19.

It came with the added benefit of providing some financial relief to bus riders still making essential trips, even if the savings in bus fare didn't make up for Willmoth's $15-a-day Lyft expense.

But as of Sunday, Metro began collecting fares again, while maintaining the reduced bus schedules, when Cincinnati officials raised concerns over public safety. City Manager Patrick Duhaney, Cincinnati Police Chief Eliot Isaac and Health Commissioner Melba Moore co-signed a letter to the SORTA board indicating the city had received multiple complaints of crowds gathering illegally. The letter also said police investigations found "many" of the people participating in those gatherings had arrived by Metro bus.

During an April 10 special SORTA board meeting, Chairman Kreg Keesee said Metro began getting complaints from bus operators, as well, of people riding the bus for non-essential trips and crowding buses.

"Do free fares then take what should be just essential trips -- people going to and from work or the doctor's office -- and does it invite just the community because it's free to ride the bus?" Keesee said. "Prior to us going free, we weren’t getting the complaints that we were getting about crowded buses."

WCPO has requested ridership data and bus surveillance video in order to confirm the anecdotal reports of crowded buses. That material was not immediately available from the transit agency, but Amalgamated Transit Union Local 627 President Troy Miller -- who represents Metro operators and maintenance staff -- confirmed drivers had expressed such concerns.

In a statement, Miller said Friday, "Locally, more of my members have vocally expressed concerns since we went to free fares (due) to the number of passengers riding the buses increased."

Crowded buses or not, Willmoth's problem remains, and now that he's unemployed, he needs swift action.

"Even though it's free right now, it's not gonna be, and I'm out of work, so that don't help me no more, you know? It's not in my budget," he said.

Now that Metro is charging for rides again, Willmoth said, all the more reason it should resume full service: "On a Saturday schedule? That ain't gonna work. People can't get to work on time."

Jones told WCPO that Metro's next step after reinstating fares will be to reevaluate service levels to see what tweaks can be made to make sure people like Willmoth can still rely on bus service for essential trips.

"We are right now looking at the service levels and using the feedback that we have received from our customers about their trip and their work needs," Jones said. "We are planning to add more service back out to serve the community."

Keesee also directed Haley and his administration to work with human services agencies across the county to engage Metro riders who still rely on bus service for essential trips and to work on a plan to provide assistance with passes at reduced or no cost as the pandemic undercuts Tri-Staters' financial security.

Ultimately, Willmoth hopes Metro will reverse course on its service reductions as it did on free fares, and sooner rather than later.

"I wish they'd change it back to regular schedules, because it's essential to people. It's an essential for people to get to work. I mean, it is," he said. "People need to get to where they need to go, and you're changing everything up. It don't work. Change it back."