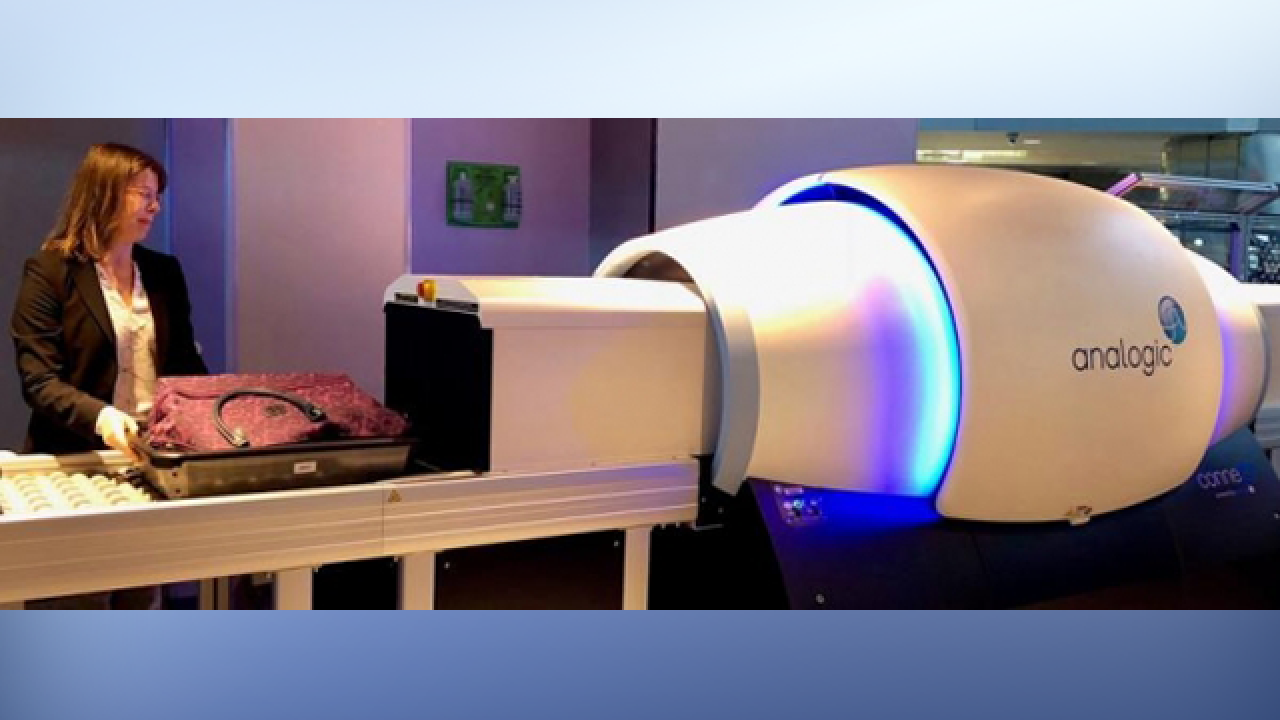 Copyright 2018 Scripps Media, Inc. All rights reserved. This material may not be published, broadcast, rewritten, or redistributed.
<p>The TSA said on Monday that it was installing computed tomography, or CT scanners, at 15 airports nationwide – including CVG. (Photo courtesy of Transportation Security Administration)</p><p><meta charset="utf-8" /></p>

HEBRON, Ky. – The Transportation Security Administration is rolling out new technology that will speed up airport screening, and the Cincinnati/Northern Kentucky International Airport is one of first airports in country – and the region – to test it out.

The TSA said on Monday that it was installing computed tomography, or CT scanners, at 15 airports nationwide – including CVG.

The plan is to utilize 40 units at various airports by the end of this year. In the future, the technology means passengers may be able to leave laptops and liquids in their carry-on bags.

RELATED:  Liquids and laptops may soon be allowed to stay in carry-on bag

Mark Howell, TSA regional spokesman, said the airports were chosen based on a number of variables. At CVG, its size and availability – as well as its recent historic passenger growth – played a part. It's one of the fastest growing airports in the country. Regionally, Indianapolis International Airport was chosen as well.

"The availability and space is a big piece of it," he said. "They have a relatively large checkpoint there, which gives us the space to operate that lane and look to see how we could expand it if we wanted to in the future. They (TSA) are trying to get some data collection from different sized markets, but I think the size and that passenger volume growth definitely played a part."

Howell said CVG's unit has been installed and employees are currently being trained, meaning "one lane should be up and running" soon. Customers at CVG can expect limited use initially, airport officials said.

The technology should result in fewer bag checks. And in the future, "the really cool thing is," said CVG's Mindy Kershner, "eventually people won't have to take their laptops or liquids out."

CVG, historically, has had really low security wait times, Howell said. In June, 90.4 percent of passengers waited fewer than 20 minutes in standard screening; most waited between 10-19 minutes. CVG was the first airport in the country to install BlipTrack technology to monitor queue and wait times. But the CT technology is more about bolstering the TSA's security effectiveness, he said.

The system applies sophisticated algorithms for the detection of explosives and creates a 3-D image that can be viewed and rotated on three axes.

"We’re able to manipulate that image and move it around. It gives us different views of the bag," Howell said.

“Use of CT technology substantially improves TSA’s threat detection capability,” TSA Administrator David Pekoske said in a release. “By leveraging strong partnerships with industry, we are able to deploy new technology quickly and see an immediate improvement in security effectiveness.”

Howell said each unit costs roughly $300,000. TSA plans to place up to 40 units at U.S. airports by the end of the year, along with 16 units at federal testing facilities. More than 145 will be installed by the end of fiscal year 2019.

"This is the future of TSA, but by no means is this going to be a quick fix," Howell said. "It's going to be a multiple-year project. The policy's not changing now, and I don't think it will for awhile – you still have to remove those items from your bag – but that's the goal."