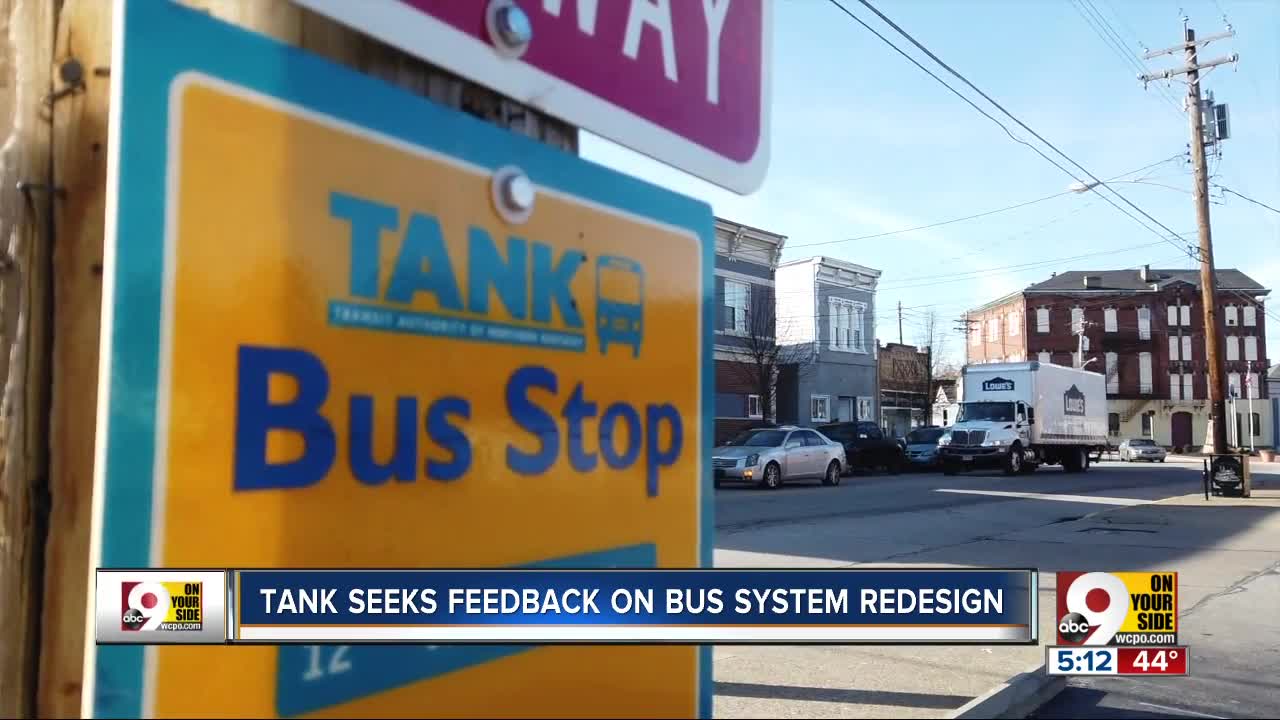 Service along at least 11 Transit Authority of Northern Kentucky bus routes might go away this year if the region's transit agency moves forward with a massive restructuring project currently in development.

COVINGTON, Ky. — Service along at least 11 Transit Authority of Northern Kentucky bus routes might go away this year if the region's transit agency moves forward with a massive restructuring project currently in development.

For regular TANK rider Tyler Mobarry, the changes could have a big impact on his commute.

"It takes about 45 minutes, which is fine. I don't mind that," said Mobarry, who lives in Fort Thomas and works at Lincoln Elementary School in neighboring Dayton. Three of the proposed changes could impact that commute directly: Routes 11 and 12, which serve Fort Thomas and Dayton respectively, are both proposed for elimination, and Route 16, which also serves Fort Thomas, would be consolidated under the new system.

"If these changes go into effect, I'm going to have to walk a mile to get (to the bus stop) home versus about a quarter-mile now, at which point I probably won't be taking the bus," Mobarry said.

TANK General Manager Andrew Aiello said the transit agency is in a position where they have to make difficult decisions.

"A lot has changed in terms of mobility, how people commute, where they commute," he said. "It's impacted the way our ridership has performed over the last few years."

Like its counterpart across the river, Cincinnati Metro, TANK ridership has been in decline for at least the last five years, while operational costs have gone up with inflation.

Aiello said the strategy for the redesign was to focus on several key corridors throughout Northern Kentucky -- such as Dixie Highway in Kenton County, U.S. 27/Alexandria Pike in Campbell County, or service to the Cincinnati/Northern Kentucky International Airport in Hebron -- and to increase frequency and adjust the hours of operation.

That also means having to reduce -- or eliminate altogether -- service on some of the smaller, lesser-ridden routes: routes like those on which Mobarry relies.

"It's a trade-off," Aiello said. "In order to make those changes, we're having to pull service out of some places that have service today."

Here's a rundown of the proposed changes to TANK's bus service:

Routes proposed for elimination or consolidation:

The prospect of losing his nearest bus stop or losing a route altogether has Mobarry wanting TANK leadership to think differently.

"I thought the whole point of public transportation was to serve the people. By eliminating routes, you're not serving the people as much," he said. "Instead of getting rid of the service and cutting a good chunk of it out, save it. I'm hoping they help us out."

Aiello said that as costs continue to increase, some riders will be affected.

"There's some changes we've made where we might not get any negative feedback on that people agree with the change, and there will be others where people don’t, and it affects them directly," he said. "Some of our express routes where people might have to drive a little farther to get to the next park-and-ride. There are some folks that may have to walk a little further to better service, and we realize that can be a hardship for some of those folks.

"A lot of the recommendations that we’re making in terms of elimination or consolidation of routes, we already have provided what we believe to be an option for some of those folks," he said.

Throughout the month of January, TANK leaders will take feedback from the communities served by the bus system, beginning Tuesday afternoon with a public input session from 4-7 p.m. at the Kentucky Career Center in Covington. After that, officials will visit all three counties' fiscal court meetings to brief elected leaders on the proposed changes as well as to hear feedback from riders. Riders can also view the proposed changes here and submit feedback by email or phone.

"This is really the process during January for them to come out and understand what their concerns are, and then for us to have that dialogue with them," Aiello said. "We want to hear from them. That way when we come to make a final decision, we are eyes-wide-open and we have all the information we need: both the analytical data but also the feedback from our riders."

Meantime, Mobarry said he's uncertain how he'll be using TANK once changes are implemented, and plans to take the opportunity to provide that feedback.

Aiello said TANK hopes to finalize its redesign plan by March or April and implement those changes in the fall of 2020.