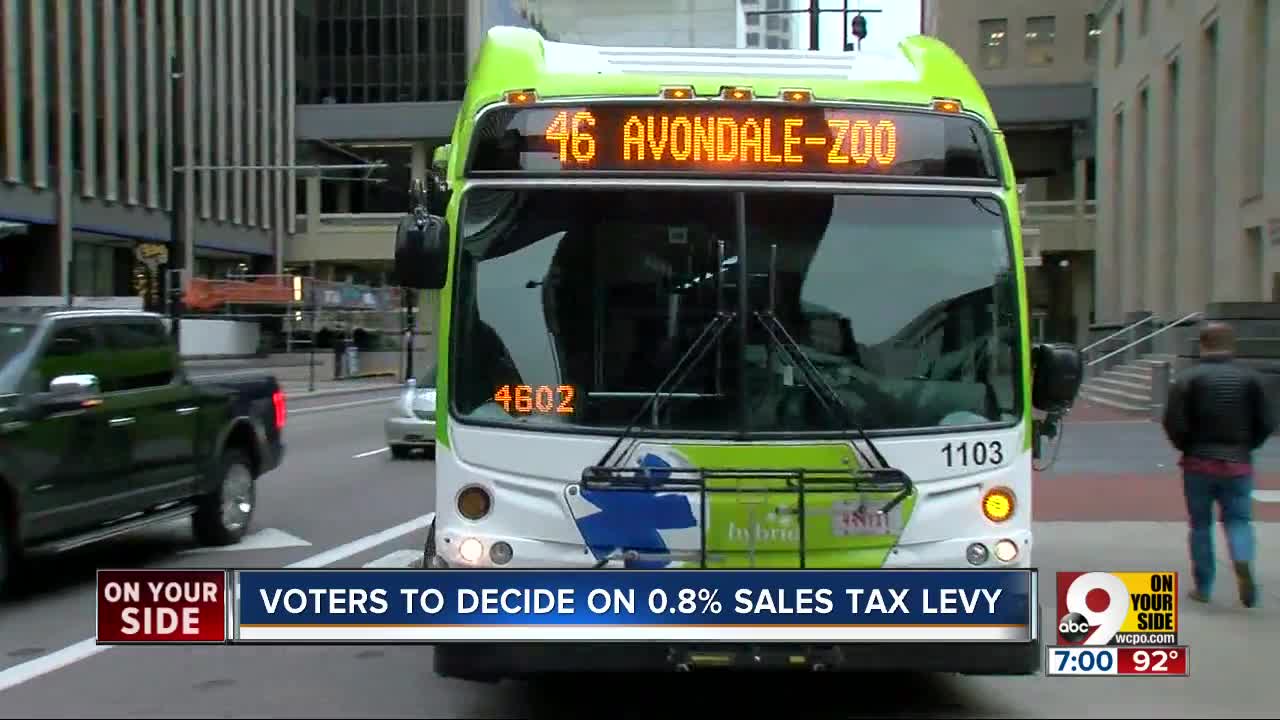 Bus advocates say they've been waiting years for the transit authority to make changes to how Cincinnati Metro is funded.

CINCINNATI — For the first time in nearly 20 years, Hamilton County voters will get to decide whether or not to boost public transportation service with county-collected tax revenue.

The board called a special meeting at the transit agency's Downtown offices for 5 p.m. Monday "to decide whether or not to place a Hamilton County sales tax on the March or November 2020 ballot and, if so, at what level," officials announced in a news release Friday morning.

SORTA Board Chair Kreg Keesee introduced a resolution at Monday's special meeting, expressing the board's will to put measure on the ballot next year, asking voters to increase the county's sales tax by 0.8%. Consumer's currently pay a 7% sales tax in Hamilton County.

Officials estimated that this level of a tax increase could generate roughly $100 million in funding for transit and infrastructure projects each year.

"We want a solution that moves our bus forward, not backward," Keesee said during remarks from various officials during a news conference preceding the board meeting. Representatives from City Hall, the County Board of Commissioners, the Cincinnati USA Regional Chamber of Commerce, along with bus operators, riders and transit advocates were among those in attendance.

The resolution stipulates that the ballot measure should include language expressing that revenue generated by the sales tax levy would not go toward Cincinnati streetcar operations. The resolution also expressed the board's intent to work to remove SORTA from the streetcar's operations structure.

The board approved the measure with a 12-1 vote, trustee Allan Freeman being the sole "no" vote. Freeman told reporters after the meeting that he still had concerns over SORTA's affiliation with the streetcar. Both the City Council and the SORTA board have expressed intention to complete the so-called "divorce" process by Dec. 31, 2019. Under its current structure, the city owns the streetcar and SORTA oversees its management on the city's behalf. Late last month, city staff estimated it would cost the city roughly $550,000 to take over management of the streetcar's operations.

Keesee said the board will review and set specific ballot language in November. As a governmental agency, SORTA's board has the authority to take a proposal to voters without a public petition. The measure could appear on either the March or November 2020 ballot.

Monday afternoon wasn't the first meeting the board has called on this issue. In July 2018, Keesee said the failure of a sales tax measure at the ballot box that year was a "political reality" before announcing the board would not make a decision on how much of a sales tax increase to request. It was the latest in a number of occasions in which officials said that it was not the right time.

Since launching its "Reinventing Metro" plan in 2016, the bus agency's staff has presented details on how the sales tax increase would boost its service, which is currently facing a $60 million budget gap over the next 10 years, if voters cannot agree on a new source of funding. A half-cent increase -- the lowest option studied -- would be required to maintain the system's current level of service; otherwise, services available will continue to decline. A full-cent option, on the other hand, would provide new routes, expanded hours of operation and more frequent arrivals along major routes, among other service increases.

Currently, a small portion of the city of Cincinnati's earnings tax comprises roughly half of the multi-county agency's $100 million operating budget each year. The other half comes from a hodge-podge of other sources.

Cincinnati Metro remains the only major metropolitan bus system in Ohio not to use a sales tax levy to fund its operations.

County voters have rejected four previous proposals to fund public transit with a sales tax in as many decades -- most recently in 2002. One of Metro's biggest challenges, advocates say, is convincing voters living in the county's more suburban areas -- where Metro service is more sparse -- that it's an issue worth their extra dollars.

That's why State Rep. Bill Seitz, R-Green Township, said he authored and successfully pushed legislation that amended Ohio code to allow for a sales tax levied by a transit agency to go toward transit service and infrastructure improvements to roads and bridges used by that transit system.

"Infrastructure is a major selling point of this plan," said Pete Witte at a July 2019 public meeting on transit and infrastructure. Witte is a West Side resident who has served on the Price Hill Civic Club, the Cincinnati City Planning Commission and the Hamilton County Planning Partnership, among other official capacities. "God forbid another chunk of concrete falls from the (Western Hills) Viaduct, and then we’re facing its emergency closure."

Officials have not specified which specific infrastructure projects could receive funding from the sales tax levy, but a study commissioned by the chamber estimated that roughly $1 billion of infrastructure