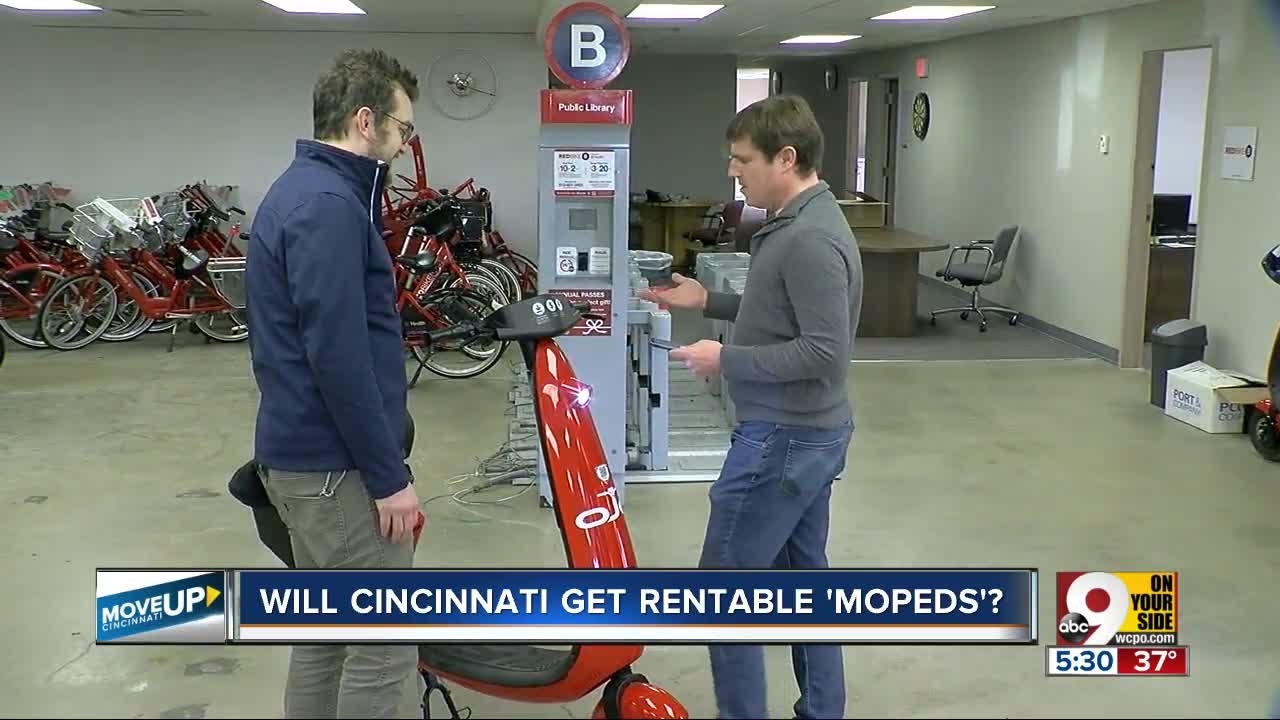 Red Bike is in talks with California-based scooter manufacturer OjO to bring to Cincinnati seated, electric battery-powered rental scooters, according to the regional bike-share program's executive director, Jason Barron. Unlike Bird and Lime scooters, these would offer a cushioned seat, a set of handlebars with a motorcycle-like throttle, and a basket on the back for storing cargo. Like their stand-up counterparts, users would be able to rent them using a mobile app, and they are completely electric, requiring overnight recharge when the battery dies.

CINCINNATI — The city may add mopeds to its growing stock of shareable vehicles competing for space on Cincinnati roads.

In addition to the thousands of traditional bicycles Red Bike currently offers users to rent, the bike-share began offering electric-assist bicycles in late 2018. Just a few months prior to e-bikes arriving, rentable electric scooters -- better known by their brand names, Bird and Lime -- arrived on the scene.

This year, the city administration released a request for proposals from scooter manufacturers to make a case for why they should be allowed to operate in Cincinnati. Red Bike engaged with OjO to respond to that request, Barron said.

"I've talked with the OjO guys, and I've really liked their business model," Barron said. "They want to launch responsibly with city permission in partnership with a local organization to manage their operations."

If a deal with OjO moves forward, the manufacturer would own the scooters, and Red Bike would maintain, recharge and service them on their behalf.

These new scooters would closely resemble what most would identify as a "moped."

Unlike Bird and Lime scooters, these would offer a cushioned seat, a set of handlebars with a motorcycle-like throttle, and a basket on the back for storing cargo. Like their stand-up counterparts, users would be able to rent them using a mobile app, and they are completely electric, requiring overnight recharge when the battery dies.

"We really like this style of scooter. I think it adds to the diversity of transportation options in the city," Barron said. "It also allows for a lot more people to ride -- folks that maybe wouldn't want to ride a bicycle or a stand-up kick scooter, might be interested in riding this sit-down style scooter."

While the scooters would present a new option to a larger population of potential riders, some are concerned about other potential problems their arrival could create. City Councilman David Mann said he has been frustrated with Bird and Lime scooters because they are dockless -- meaning users can park and leave them at any location consistent with their terms of use. For the most part, that means they must be standing upright and not blocking the public right-of-way.

"What drives me nutty is how Lime and Bird are left around town in pedestrian right-of-ways in violation of what the understanding is supposed to be," Mann said.

The OjO scooters would arrive as dockless scooters, but Barron said they have the capability to geofence certain locations where the scooters can be parked, using GPS hardware embedded on the scooter. "It would be like, 'This is where you have to park the scooter, and if you don't, there's an additional fee.'" Barron thinks it would be most logical to locate scooter return areas next to existing Red Bike stations, creating what he referred to as a "hub" for scooter and bike rentals.

That's an idea that resonated with Mann.

"I would very much prefer that this new variation use the existing docks. That appeals to me," he said. "If the other problem continues, randomly leaving the devices on the streets, in the pedestrian right-of-way is just going to get worse."

Barron said the request for proposals included a stipulation that any scooter program would include the possibility of geofencing return locations.

Here's what is known at this point:

Barron said the "size and robustness" of the OjO scooters could prevent the potential for users to ride them on the sidewalk. "The style of scooter leads you to be less likely to ride on the sidewalk and to ride it in the road," he said.

Barron said he hopes to have the new scooter program ready to launch by spring 2020.