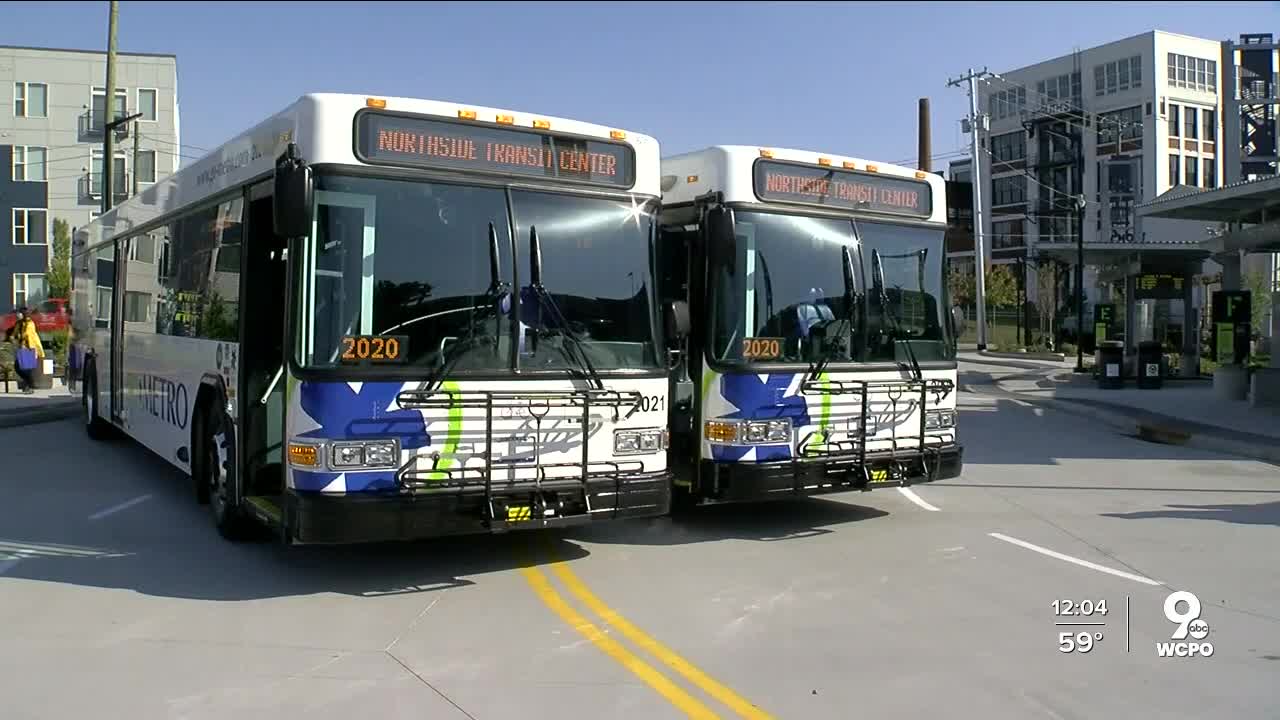 The site used to be an unused plot of grass with minimal infrastructure, accommodating bus riders waiting along the five streets that collapse into Knowlton's Corner. Now, it's home to eight sheltered bus stops, digital arrival time signs and bus ticket vending machines. CINCINNATI — It was a cool, cloudy day in Northside when city and transit officials broke ground on a plan years in the making to build a Cincinnati Metro bus transit center in the historic Cincinnati neighborhood. That was nearly a year ago.

On Tuesday morning, with cool temperatures but clear skies, the Southwest Ohio Regional Transit Authority unveiled the fruits of that labor.

"After breaking ground a little less than a year ago, the Northside community is home to a state-of-the-art transit hub," said Metro CEO Daryl Haley, during a ribbon-cutting ceremony held Tuesday morning at the site located along Spring Grove Avenue between Ludlow Avenue and Blue Rock Road.

The site used to be an unused plot of grass with minimal infrastructure, accommodating bus riders waiting along the five streets that collapse into Knowlton's Corner. Beyond the vacant plot, the Metro bus configuration around the intersection created some traffic problems, according to Mary Kroner, co-owner of Ruth's Parkside Cafe.

The café has called the former site of the American Can Factory home for the last seven years. Kroner spoke about the location's role in Cincinnati's transportation history.

"This bay and our bay and the next one, trains went back in there. So the ceilings are enormous to accommodate the trains. The whole parking lot used to be train tracks back in the day," she said.

With the modern transit hub nearly up and running, Kroner said it fits the neighborhood.

"When I learned that Knowlton's Corner was the second-busiest bus hub after Government Square, then I was like, 'Yes, something should be formalized.' Because we had the one bench and the one garbage can, ya know?" Kroner said.

It's also home to five murals commemorating the spirit of the neighborhood.

"It is unique because I've never seen a 'towny' area like this," said 12-year-old Walnut Hills student and lifelong Northside resident Zosia Goban.

She is one of five artists whose murals commemorating the neighborhood hang at the new transit hub. Her piece features three multi-colored skulls — a symbol unofficially representing the neighborhood — with positive attributes painted across the tops: descriptors like "DIVERSE," "UNIQUE," "WELCOMING," AND "WALKABLE."

"It's very walkable. You can walk anywhere to get food. It's actually fun to walk. It's really nice. The people are really nice," Goban said.

Officials at Tuesday's ribbon-cutting also stressed how the transit hub fits into the neighborhood's goal to welcome visitors and offer positivity in a time of turmoil.

"The pandemic, loss of life, illness, recession, furloughs, racial injustice laid bare, and epic levels of gun violence, and it's hard to find hope. But Issue 7 and this transit center is hope," said Cincinnati Mayor John Cranley, referring to the sales tax levy approved in May, which increased the amount of local funding available for Cincinnati Metro bus service and subsequent road improvements along the bus agency's routes.

"I think it will stand the test of time as a transition moment for our county towards the future."