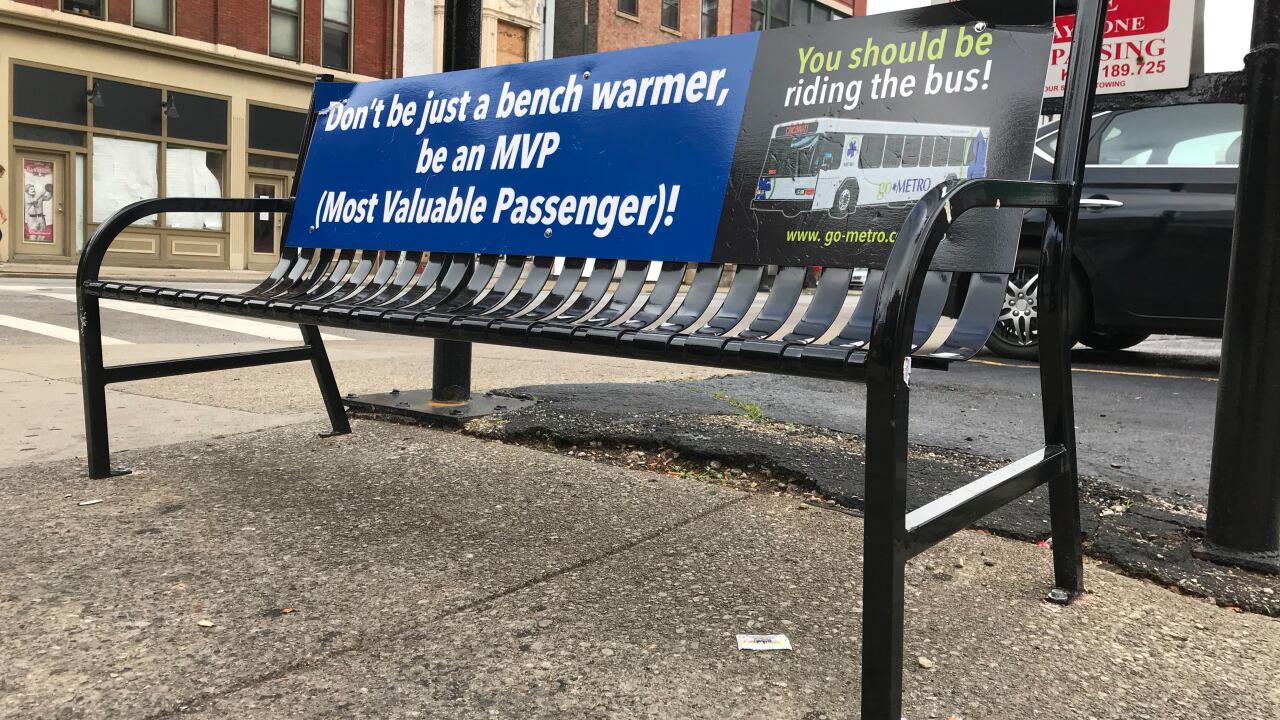 Fifty more Cincinnati Metro stops now — or will soon — provide riders with a place to sit while they wait for the bus to arrive.

A significant portion of the stops with new benches are centralized, for now, in downtown Cincinnati, which serves as the bus network's hub and sees the densest concentration of routes. Others are peppered evenly throughout the city's East and West sides as well as a few Uptown near the University of Cincinnati.

Jones said Metro fronted the cash out of its capital budget to purchase and install the benches. It hopes to recoup those expenses with future advertising revenue that the transit agency hopes the benches will generate. Metro is in the process of reviewing third-party contractor bids for selling the benches' advertising space.

The advertising revenue will go toward maintaining the benches Metro has already installed, and officials hope that there might be enough to install more benches in the future.

Here's a map locating the Metro stops with new seating:

Use the +/- buttons in the bottom left to zoom, or see a list of the stop locations using the pop-out menu button at the top right of the map window.

Locations for the initial round of 50 benches were selected based on how many riders use that stop per day and other factors, including whether environment could safely support a bench without impeding others trying to use the sidewalk.

"Is it in a safe location? Is there infrastructure that supports putting in a bench? Questions like that," Jones said.

The bus stop bench program is a small part of the transit agency's larger efforts to "Reinvent Metro" — the name of its campaign to reinvigorate the struggling regional bus system and plug a looming $160 million budget gap over the next decade.

"Your experience starts at the bus stops," Jones said. "We’re always looking at how we can meet the modern needs of our riders and meet them where they are."

The long list of proposed improvements to Metro bus service would rely on finding a new source of funding. The transit agency is expected to ask voters for anywhere from a 0.6 to 1.0% increase to the Hamilton County sales tax to fund the improvements, which would include longer service hours, more frequent routes and possibly bus rapid transit corridors.

An I-Team investigation last year found that the majority of Metro bus stops do not offer places for riders to sit while they wait. One of Metro's busiest routes, Route 33, connects Government Square in Downtown to Westwood. WCPO found that more than 80 of the 100 stops along that route did not feature a bench.

Metro is also in the middle of what officials call its "bus stop optimization plan": Along with assessing the need for more benches and shelters at its stops, the agency is also relocating or removing some stops found to be redundant or under-utilized. The removal of some bus stops led to some backlash from riders earlier this year.

The state of some Metro bus stops gained national attention in 2018 when a Metro stop in Springfield Township was nominated for StreetsblogUSA's "Sorriest Bus Stop in (North) America" contest. It came in second place. Not long after, Metro relocated that stop on Daly Road.