Could the Millennium be replaced by a new hotel and expanded convention center? 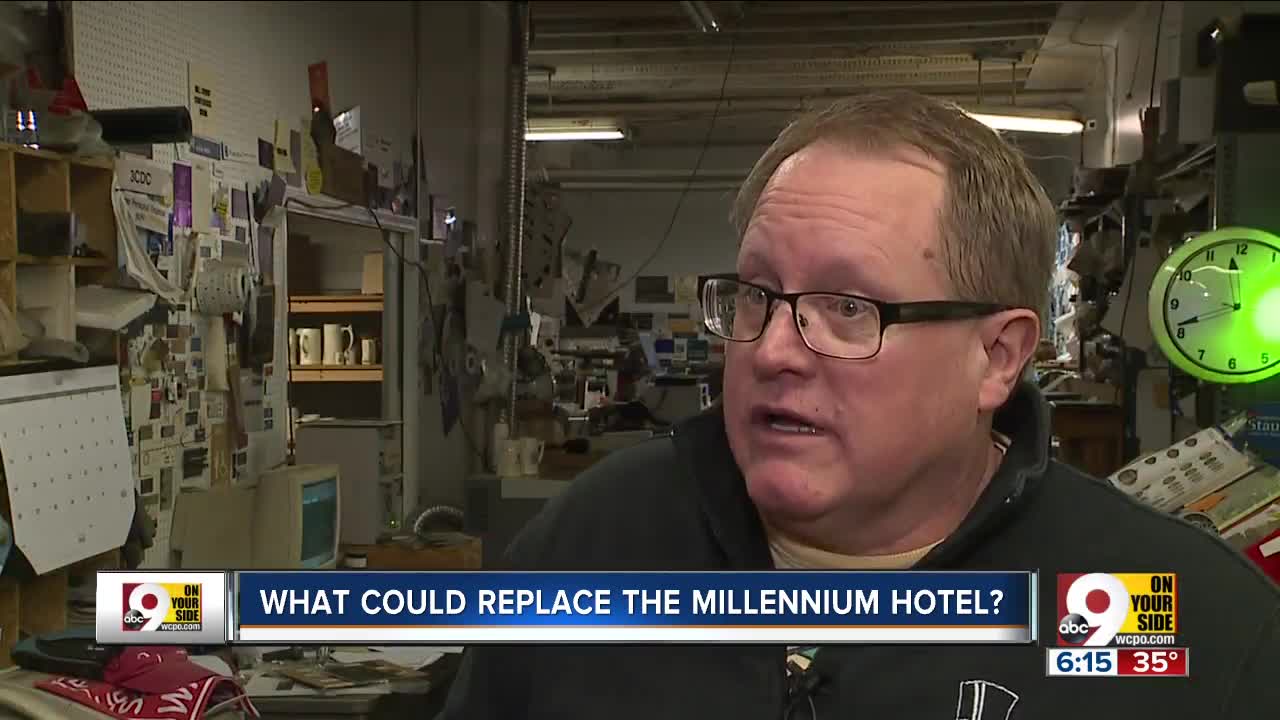 What could replace the Millennium Hotel?

If all goes as planned, the Millennium Hotel site will be under new ownership by Valentine's Day. That's when the Port is set to close on the property, as long as the Hamilton County Convention Facilities Authority votes to approve a $59 million revenue bond package for the acquisition and demolition of the hotel on Friday.

One board member had already publicized his vote by Wednesday night.

Once the sale goes through, plans for the property's future are up in the air.

"At the end of the day, we’re buying the Millennium Hotel without a finished plan," said Witte.

The purchase deal was brokered last fall by Vandercar Holdings LLC with the owners of the Millennium Hotel, which closed its doors in December.

The buyout cleared the way for county leaders to build a higher-end, high-rise convention center hotel downtown. The $59 million bond package will come from the transient occupancy tax, or TOT. Those are taxes charged for each hotel stay in Hamilton County.

However, the deal happened quickly. Due diligence reports still aren't completed, which leaves county leaders and CFA members with a lot of questions.

Among them, according to Witte: “What size hotel, where does the hotel go? And, probably the biggest question is do we expand the convention center at this time?”

“We’re doing models that are 600, 800 and 1,000 (hotel rooms) to give ourselves some options, but we really do need to learn from the studies that are being conducted and concluded shortly," she said.

She added that the county, the city, the Port and, most likely, the CFA are all on board for the project, but adding a convention center expansion adds more questions.

There are multiple configurations for a convention center expansion that include closing Elm Street, and expanding across it.

"There are other scenarios where it goes up and over Fifth or up and over Sixth or across Elm. These are all the kinds of things that are being studied right now,” said Driehaus.

According to Witte, some cost estimates are in the hundreds of millions of dollars, depending on the number of hotel rooms included and whether the convention center expansion comes into play.

"When you take the number for the hotel alone, and you combine it with the possibility of expanding the convention center, we might be talking a package in total of $750 million,” he said. “That is a number that is now the scale of the Bengals and Reds stadium built together. This is a big deal.”

“For someone who lives in the far reaches of a jurisdiction in Hamilton County, who hasn’t stepped foot in our convention center in a long time, believe me, they should know that the convention center is positively impacting them because of the economic spin-off,” he said.

However, financing of the final project will need to be determined.

“The private market enters the scene and builds the hotel with private dollars,” said Driehaus. “The public dollars are not related to the development of the hotel. At least, that’s my expectation as to how this will go.”

However, Witte said they could ask state lawmakers to approve a hotel tax increase. He said if a county sales tax increase is needed, he would want it to be approved by voters.

“Do we have enough hotel tax and where? How far does the hotel tax get us to support debt? And then, how much private investment is there to be gotten into this. And then, what other subsidies from local governments might be needed to get us there,” Witte asked. He said they are looking at how other cities like Cleveland and Columbus have recently built new hotels and convention centers.

In fact, a delegation from Cincinnati spent Wednesday in Cleveland talking with convention officials there about their experience building a convention center hotel that opened shortly before hosting the 2016 Republican National Convention. The delegates plan another trip to Columbus, which is building a 28-story, 1,000-room convention hotel set to open in 2022.

Both the convention center hotels in Cleveland and Columbus are Hiltons, but are owned by each county's Convention Facilities Authority. In September, Hilton said it was in early discussions with Vandercar to build a 600 to 800-room hotel at the Millennium site.

The project will likely take years to complete, but Driehaus and Witte said they believe acquiring the site from the Millennium owners is an important step. They said St. Louis has had an empty former Millennium hotel in its downtown for several years.

“I don’t think any of us want a closed Millennium high-rise hotel across the street from our convention center in the middle of downtown sitting vacant for an extended period of time," said Witte.