Mayor called Millennium Hotel 'terrible,' hoped to put it out of business 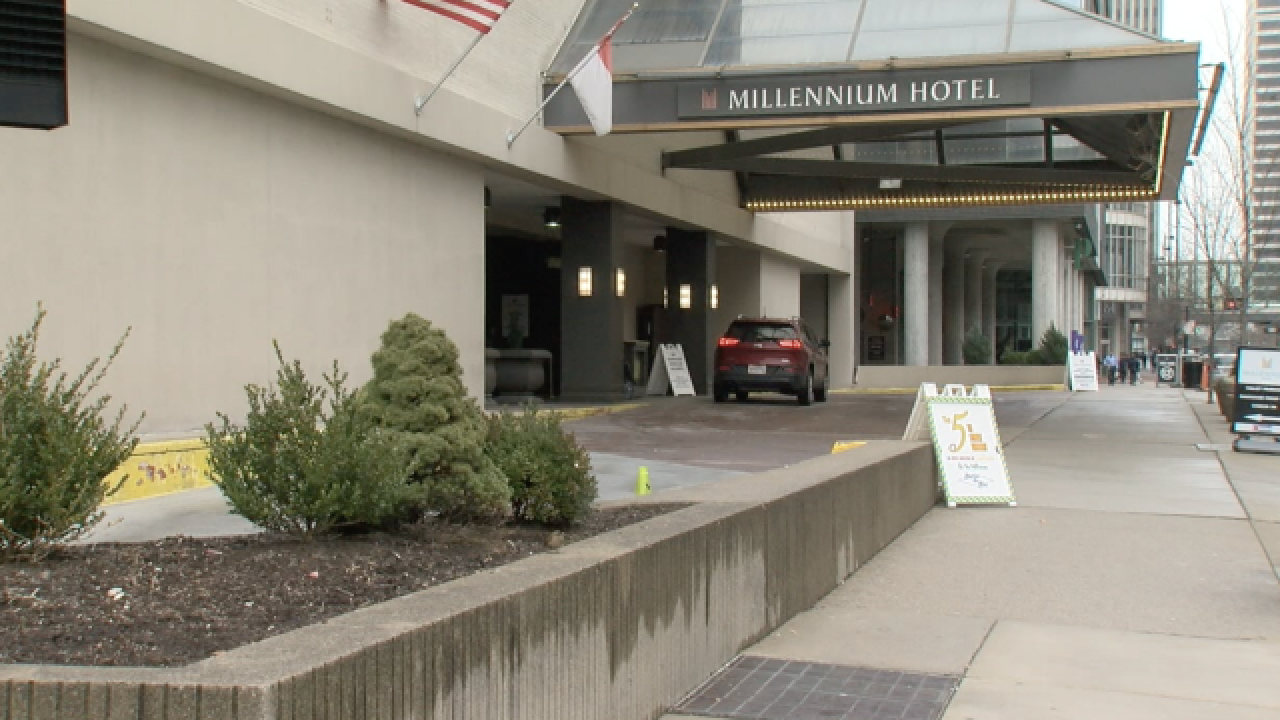 Some six weeks after Cranley called conditions at the Millennium “terrible” and told WCPO he hoped for a new hotel to put the Millennium “out of business,” leaders announced that they would jointly seek proposals to develop an upscale hotel at the site of the 5th & Plum Parking Lot, one block south of the convention center.

Leaders have complained that the Millennium, one block east of the convention center at 5th & Elm, has cost the city millions of dollars in convention business.

“I want to officially tell people not to stay there because they will have a bad experience in Cincinnati,” Cranley told WCPO in March. “That’s just a terrible place to stay.”

At the time, Cranley said he would tear down the city-owned skywalk connecting the Millennium to the convention center and rebuild the enclosed walkway at a new hotel if it were built.

In addition, Hamilton County Prosecutor Joe Deters told WCPO that he had instructed his civil division to begin working on a public nuisance lawsuit against the Millennium.

“I don’t stay there, but I’ve heard that it’s really bad,” Deters said. “That location is great. But the property itself is in such disrepair and has been such a problem.”

Cranley said he had tried to persuade Millennium owners to either renovate the 872-room hotel or sell it – to no avail. The Millennium is part of the London-based Millennium & Copthorne Hotels chain. The majority investor in the chain is Singapore-based City Developments Limited.

“The Millennium is a huge problem for the county and the city,” Driehaus said. “We can no longer have a hotel that isn’t servicing the needs of conventioneers who are coming to town.”

The group proposing a new hotel represents the city, county, Cincinnati USA Convention & Visitors Bureau, The Port and Cincinnati Center City Development Corp. (3CDC), according to a release from 3CDC. 3CDC will lead the search for a new hotel developer.

According to a commissioned study, a new upper-scale, full-service hotel would bring new convention business to the city as well as create temporary jobs during construction and permanent jobs once the hotel opens.

The study said the market can support a convention center hotel with a minimum of 600 rooms, along with 40,000 to 60,000 square feet of flexible meeting space and a 12,000 to 20,000 square-foot ballroom. The potential site, which is owned by The Port, is 82,000 square feet, leaving open the possibility for the Convention Center to expand in multiple directions in the future, according to the release.

The study was conducted by HVS, a global hospitality consulting firm.

“When the county held public hearings to determine our top capital project priorities, we listened,” Driehaus said in the release. “The need for a top-notch convention center hotel rose to the top of the list. That’s why we are working aggressively to get a new hotel built.”

"We have been proud, good corporate citizens of the Cincinnati community for more than 20 years, where we have provided safe and clean rooms at affordable prices. We welcome the opportunity to engage in meaningful and productive discussions on the ways our hotel can continue to be supportive of the long-term vision and vitality of Cincinnati.”

In a statement to WCPO last month, a Millennium spokeswoman denied that the hotel had received any nuisance complaints, saying:

“We take pride in our staff and quality of service we provide, and have had no specific ‘nuisance’ complaints from guests, employees or immediate neighbors of the Millennium Hotel Cincinnati that would merit such an action. However, we are aware of the general challenges faced by the convention center and we will listen to the views of the city, county and other stakeholders as we review our options in respect of the property.”