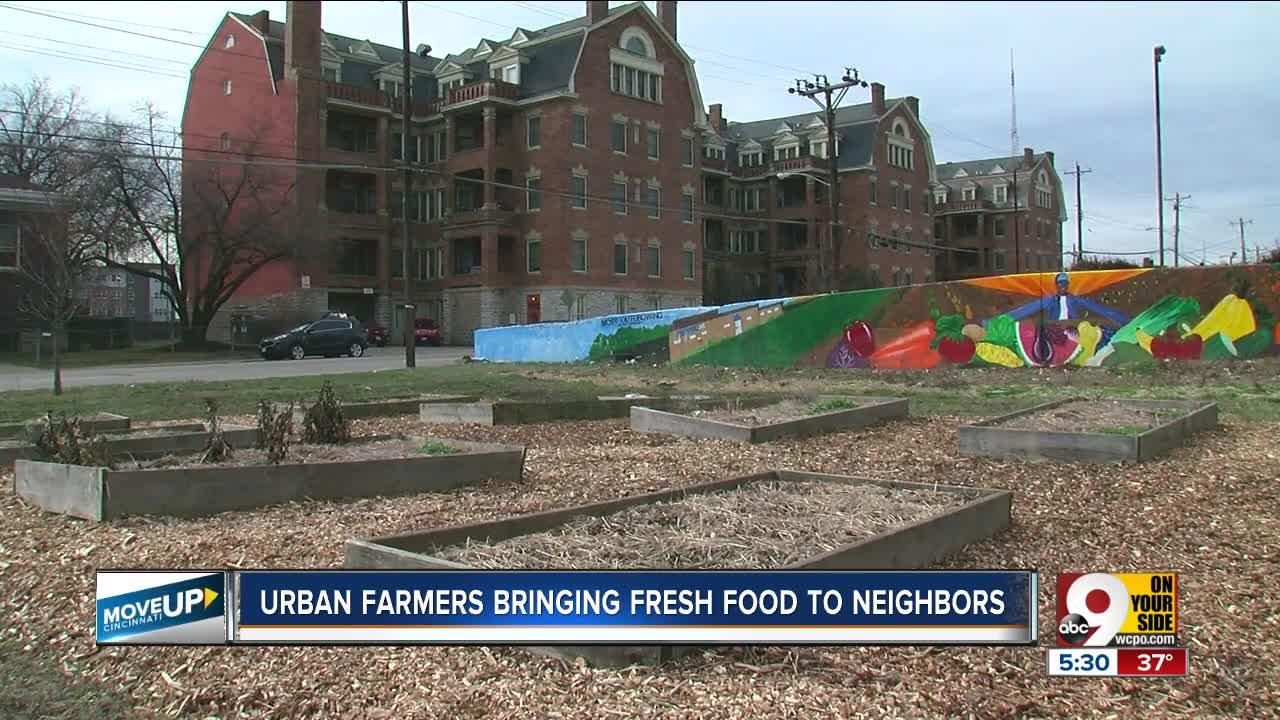 Community supported agriculture is a growing solution for Cincinnati neighborhoods without convenient access to fresh food and groceries.

CINCINNATI — Domonique Peebles grew up in Louisville, Kentucky growing food in his backyard, taking what he and his family couldn't eat themselves and giving to his neighbors and family friends.

"We would always grow more than we could actually eat," he said. "I asked my dad one time, 'Why do we do this?' and he said, you know, 'You get to go home and eat every night, but that doesn't mean the people you live next to get to do that.'

"That's just something that's always stuck with me."

When Peebles moved to Over-the-Rhine in 2011, he found himself continuing that tradition.

"I lived between two Kroger buildings," he said, one on Vine Street in OTR and the other in nearby Walnut Hills, but it didn't take long for both of those grocery stores to shutter.

Suddenly, Peebles found himself living in a food desert. That's when he decided to take the seed of an idea his father planted years ago, and try to grow a solution.

During his first several years living in Cincinnati, it became clear to Peebles that the problem he and his family were trying to address -- by distributing food they had grown to their neighbors -- is a widespread phenomenon.

When both the OTR and Walnut Hills Kroger locations closed, he found himself once again collecting grocery lists from his neighbors and grocery shopping for them.

"So I also had neighbors that I lived with who didn't have access to a car to be able to go clear to another state, which was the closest Kroger (in Newport, Kentucky), in order to get groceries and vegetables," he said.

This led Peebles in 2016 to found Brick Gardens, a nonprofit that works to convert unused building and land spaces -- both indoor and outdoor -- into areas to grow and farm fresh produce.

After four years of partnering with Cincinnati State and Technical College and Xavier University to occupy unused grow spaces on their campuses, as well as New Prospect Baptist Church in Roselawn, Peebles and his team are in the process of building a partnership with the former orphanage-turned-mental health and specialized education center, St. Aloysius, in Bond Hill.

"We've got six garden beds," Peebles said, in addition to roughly 50 young fruit trees and bushes around St. Aloysius' campus. "The idea is to add three to six more garden beds each season."

The group is also in the process of adapting two unused classrooms -- one into indoor hydroponic garden space and updating the other into a classroom for students to learn gardening skills.

Last year, volunteers worked to clear 7 acres of land on the campus' back end, where they plan to plant orchards and other larger-scale farming infrastructure.

For Peebles, an empty room or plot of land is a point of opportunity.

"The idea about this is to have a food access point that people can come and actually participate in educational programming but also walk away with something edible as they’re walking around and just enjoying the space," Peebles said.

Connecting people to their food and each other

Like Peebles, Gary Dangel also found himself living in a food desert when the Kroger store in Walnut Hills closed its doors.

Dangel is a decades-long Walnut Hills resident and also serves as the food access coordinator for the Walnut Hills Redevelopment Foundation.

"Our biggest thing is that we don't have access to reasonably priced, fresh food," Dangel said, standing inside the now empty former grocery store on East McMillan Street. "We're making multiple attempts to get some type of retail establishment back here, long-term."

Part of those efforts are seven community gardens and orchards Dangel and his team of volunteers have planted throughout the neighborhood. The gardens are open for neighbors to visit and, when in season, tend and harvest. By providing produce for selling at pop-up produce stands and from the foundation's mobile produce van, Dangel said the gardens create a stronger connection between people and the food they eat.

"By growing, it reconnects people to where their food comes from," he said. "The unique offering is that it's hyper local. All of it was harvested within two hours, and it was grown within half a mile" of the produce stands where they're sold -- usually in the parking lot of the former Kroger.

"That's a claim I don't think anyone else can make."

Beyond a connection to their food, neighbors grow more connected to each other, as well, Dangel said.

"What I realized in doing this is that people stop by and talk to you," he said. "You get to know your neighbors where you may not otherwise. It feels good to eat food that you know the person that grew it. It was grown right here in your neighborhood."

Across town in Northside, Tommy Rueff -- founder of Happen, Inc. -- is finding similar benefits to the community gardens his programs have established.

"Gardening, growing is a creative process that should involve the whole family and neighborhood," he said. "Our mission is to bring parents and kids in the community together through these creative activities."

Each grow season, Happen sponsors the Do-Goods garden vegetable program where kids in the neighborhood can get fresh produce not for money, but for simply doing a good deed that day.

"Parents get into it and kids are really empowered by it," Rueff said.

Another added benefit, he said, is that the garden spaces they've created give the dense urban neighborhood a sort of backyard space that many residents don't have for themselves.

"People don't have backyards, so it's a place where people can come in, read a book, relax. It's amazing how gardens can interact with anyone."

It's one thing to plant; it's another to sustain

Peebles, Dangel and Rueff's respective organizations are all beneficiaries of the city of Cincinnati's urban agriculture grant program. Started in 2010, the grant money was administered on the city's behalf by the Civic Garden Center, with the city taking over direct administration in 2017, according to the city's sustainability coordinator, Ollie Kroner.

In 2019, the city awarded 41 projects with grants ranging from $140-$5,747, with the average award being $1,349. The awards for 2020 will be announced in early February, Kroner said. The Office of Environment and Sustainability are taking grant applications through 5 p.m., Friday Jan. 31.

Peebles, Dangel and Rueff all agree they would not have made the progress they have without the urban agriculture grants they've received.

"Urban agriculture is a very small, small community," Peebles said. "I’d say one of the biggest issues is lack of resources."

Dangel said that when it comes to preparing and irrigating an empty lot, upfront costs can exceed $10,000 in some cases. And then there's the added labor of coordinating those resources and the volunteers needed to do the work.

"Where gardens are successful, you have someone that's responsible for managing them," Dangel said. "In order to make it sustainable, we found that you have to have somebody that's paid. It's their responsibility to organize volunteers and come out and work."

But Rueff said even a one-time grant gift from the city can return dividends for years after: "It's an amount of money that it's not going to cover everything, but it makes such a difference down the road because that soil that we got two years ago, it's still helping us every season after that.

"The return on that investment is pretty huge when you think about how many pounds of vegetables these kids are harvesting," he said.