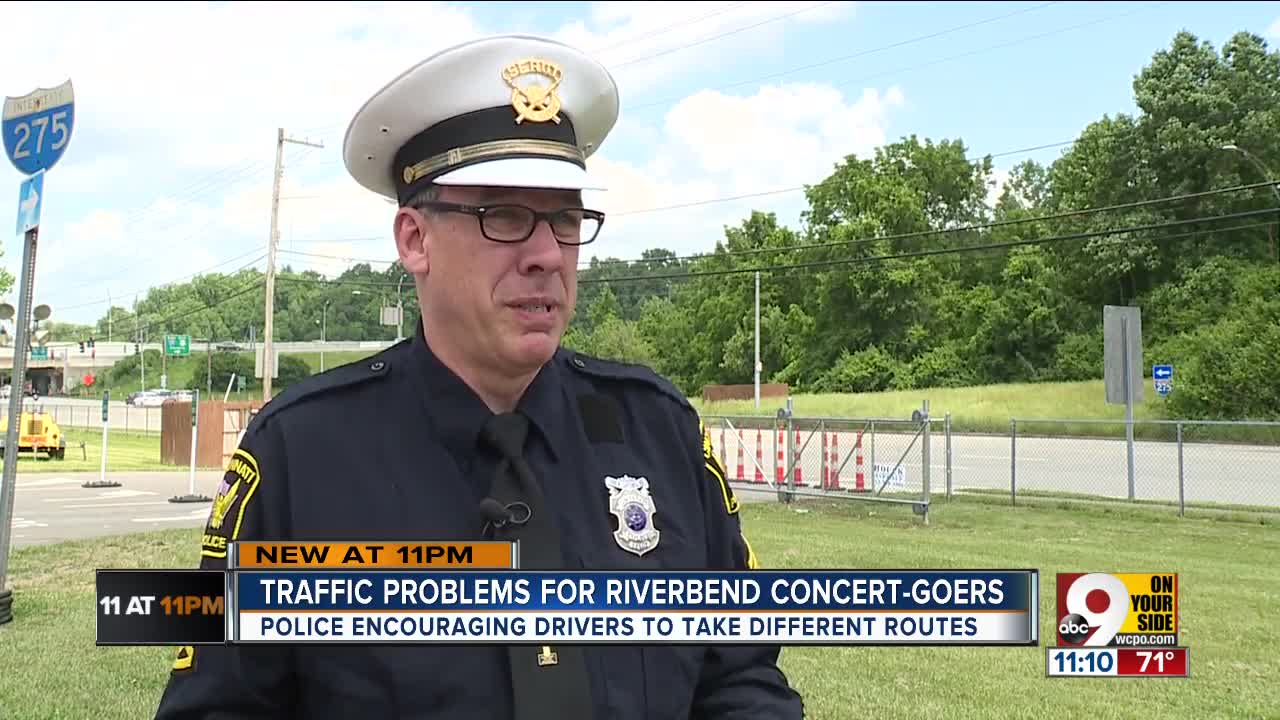 Since it opened in the summer of 1984, Riverbend Music Center has earned a reputation for hosting world-renowned musical acts at its outdoor amphitheater located just next door to Coney Island on Kellogg Avenue. Over the decades, the music venue also has become renowned for something less glamorous: major traffic jams and delayed exits before and after each concert.

CINCINNATI — Since it opened in the summer of 1984, Riverbend Music Center has earned a reputation for hosting world-renowned musical acts at its outdoor amphitheater located just next door to Coney Island on Kellogg Avenue.

Over the decades, the music venue also has become renowned for something less glamorous: major traffic jams and delayed exits before and after each concert.

It's a problem Cincinnati police Sgt. Eric Franz said crept up on the area.

"It kind of got overlooked," Franz said. "When the place was built, there was not a good amount of cars coming in and out with just one person in them. Most people, in the original concerts, had four, five, six people in a car. Now, you've got ones and twosies showing up; you've got Ubers and Lyfts. So the attendance is the same, but the volume of vehicles has increased."

Riverbend has the capacity for slightly fewer than 21,000 attendees. With people arriving one or two per vehicle, that means thousands of cars funneling onto Kellogg Avenue in the hours leading up to showtime.

"Typically, the majority of the backup is on the west side, where we back up (Interstate) 275 into Kentucky," Franz said, due to a large portion of visitors electing to arrive at Riverbend via the interstate's Exit 72 at Kellogg Avenue. "Occasionally, if it's Friday rush hour, and we've got a sold-out concert, traffic will be congested all the way from (Interstate) 471 all the way out here."

The best way to avoid this sort of backup, Franz said, would be for more drivers to choose a different approach to the venue.

"There are numerous alternative routes," he said. "If you live in Anderson Township, Newtown, Indian Hill, your best route is to come through Mount Washington and down Sutton (Road). If you're coming from the north or west side of town, come around 275 from the top and exit at Exit 71. It's marked. It's the New Richmond exit," which provides drivers access to Kellogg Avenue on the east side of the music center.

"We rarely have any kind of backup coming from the east side," Franz said.

Making traffic jams gnarlier is ongoing construction along I-275 at the Combs-Hehl Bridge, which sits just a few hundred yards from Kellogg Avenue. Ohio Department of Transportation spokesman Brian Cunningham said crews are progressing through the project, but drivers in the area should still expect some delays.

"We tried to work with the venues down there, Coney Island and Riverbend, to minimize that, but it is an active project, so there will be some impact to those venues," he said.

As of May 2019, the bridge includes what is known as a "contra-flow" lane, which is a westbound lane of traffic situated on the eastbound side of the interstate as drivers approach the bridge on the Ohio side.

Another part of the challenge, Franz said, is retraining concert-goers to follow newly installed signs directing drivers to their various parking options, which span from Coney Island to Riverbend's west all the way down to Belterra Park Cincinnati to its east on Kellogg.

"A lot of people will question the fact that they can't see Riverbend when they pull in here on the Coney Island side, even though the signs say it," he said. "Just trust the signs."

Another tactic police officials have used over the last year to mitigate pre- and post-concert congestion: reaching out to Uber and Lyft drivers.

"We've made a lot of changes to make life easier for them," Franz said, including dedicating parking lot 10 exclusively to Uber and Lyft staging. Police close that parking lot as a staging area for ride-share drivers roughly 30 minutes before a show will conclude.

"If people will follow their app and walk out to that lot, they would be able to achieve getting out of there a lot quicker. Once we educated the Uber and Lyft drivers, a lot of our congestion went away."

Ultimately, Franz hopes these efforts will do away with Riverbend's reputation for being a traffic nightmare.

"The days of the three-hour concert exit are gone," he said. "Last year, we didn't have any concert exits that went over an hour in time."