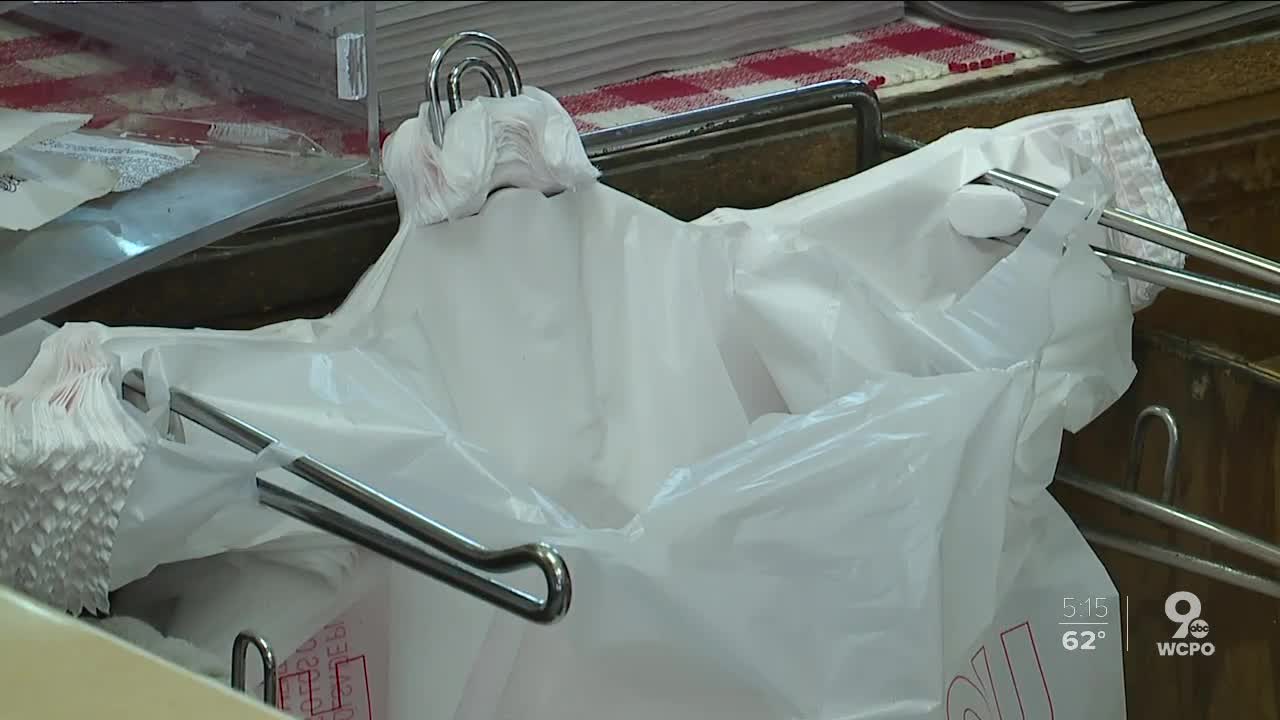 A proposed ordinance would ban single-use plastic bags from establishments selling takeaway food or foodstuffs in the city of Cincinnati. 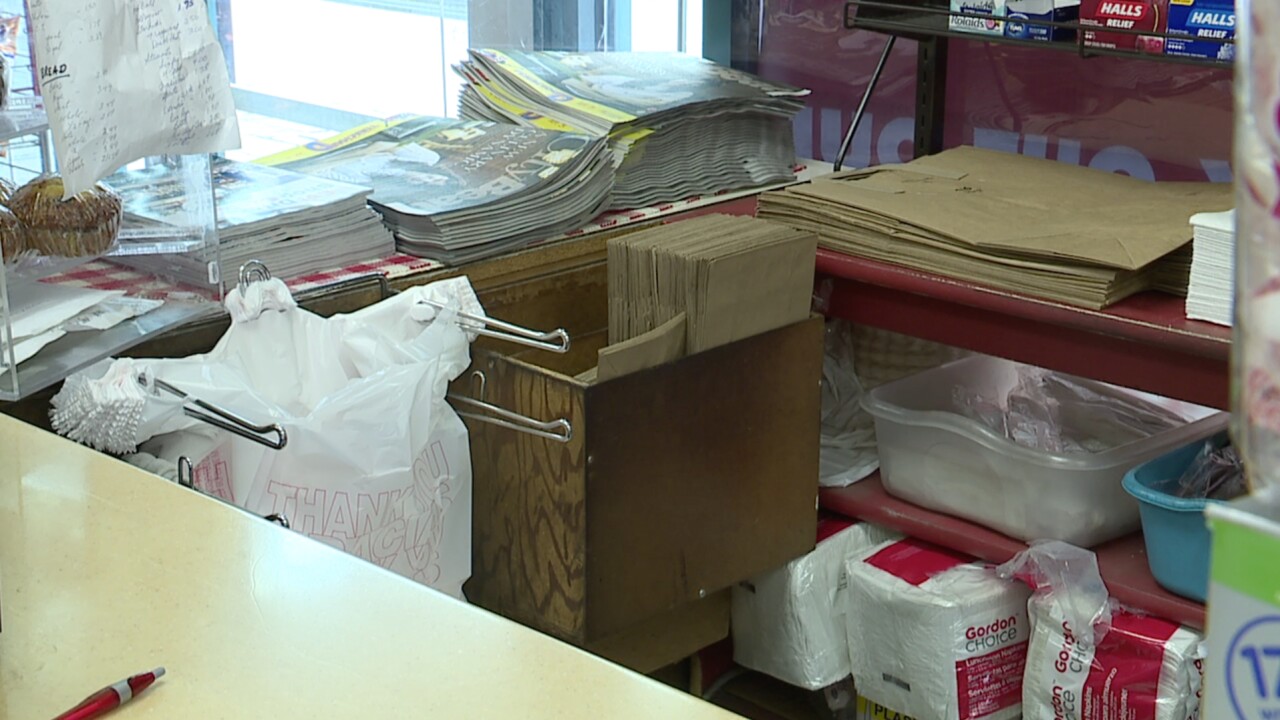 "We do an array of your basic groceries, beer, wines," she said. "But our main focus is lunch time. We have hot and cold specials, five hot soups a day. All of our products are homemade and made fresh.

"Most of our business is walk-in," she said.

Beyond the array of food options, Griffin's market also offers customers a choice when it comes to the type of bag with which they can carry their food home.

"We do have the plastic 'Thank You' bags. We offer them if customers prefer them. Some do, but I would say most prefer our brown paper bags," she said.

Turns out, Griffin's customers' apparent preference for paper over plastic could make a proposed city law somewhat easier for her to accommodate: City Councilman Chris Seelbach announced Monday afternoon an ordinance that would ban the use of single-use plastic bags by food establishments throughout Cincinnati.

"This is perhaps the most impactful legislation I (will have) ever passed because it impacts so many businesses and makes them make a large change to how they operate," Seelbach told WCPO 9 News. "Ninety-nine percent of people I talk to know that this is the right thing to do but acknowledge that this is going to take some changes."

If City Council approves the ordinance, here are the basics of how it would work:

If a business offers customers alternatives to single-use plastic bags -- such as a reusable plastic bag or a paper bag made out of recycled material -- that business must charge a minimum of 5 cents for the bag, except for customers who qualify for food assistance benefits.

Seelbach admits his ordinance is complicated, saying it took the last 7 or 8 years to prepare.

"We wanted to ensure we were targeting the right establishments and not harming those that shouldn’t qualify. We had to get the buy-in of our health department and the inspectors," he said. "We also wanted to find a way to make sure low-income people were not harmed by this."

Seelbach's primary motivator is to cut down on plastic litter throughout the city and to address growing concerns about the environment and climate.

"The last year we’ve seen dramatic changes in the climate in Cincinnati," he said. "We’re getting substantial more rain, and we’re a city that’s built on hillsides. That immense amount of rain is causing our hillsides to collapse."

Kroger, Co. -- the country's largest grocery store chain, headquartered in Cincinnati -- pledged to phase out its use of single-use plastic bags company-wide by 2025. Seelbach said getting the grocery giant onboard with the city-wide ban, which would go into effect four years earlier, was "one of the biggest hurdles."

"The support of Kroger was needed for a lot of my colleagues," he said.

Seelbach said the city will give out 10,000 reusable bags in the 10 months leading up to the ordinance going into effect, a giveaway funded by Kroger.

The grocery chain released a statement Monday afternoon in support of Seelbach's proposal:

In 2018, Kroger became the first major US retailer to announce a phase out of single-use plastic bags at check out. Our commitment supports Kroger’s Zero Hunger | Zero Waste social impact plan and recognizes we have a responsibility to reduce unnecessary plastic waste that harms our environment and endangers our ecosystem.

Kroger supports the City of Cincinnati’s proposal to accelerate this work. We like three specific aspects of the proposed ordinance: First, applying the single-use plastic shopping bag ban to both restaurants and retailers is important because we need a community-wide effort to reduce plastic waste to bring us closer to our goal of creating communities free of waste. Second, the inclusion of a small fee on single-use paper bags has proven effective at moving consumers toward reusable bag alternatives, and our ultimate goal is to shift completely over to reusable bags. And third, the proposal provides relief by exempting low-income shoppers from paying this fee.

Kroger intends to transition to a reusable bag model in all of our stores by 2025. To support our Zero Hunger | Zero Waste plan during this transition period, Kroger will continue to offer customers in-store recycling services for plastic bags and other plastic films, including produce bags, bread bags, deflated air pillows and more.

We thank Councilman Seelbach and his staff for including Kroger in the development of this proposal.

Griffin said she would support the measure, but that it would mean increased costs for business owners like her.

"Plastic is definitely a lot cheaper," she said. "It’s probably maybe 2 cents a bag, where if you want to go with a brown paper bag, it would range anywhere from 5 (cents) to maybe a quarter, depending on the size of the bag.

"There is a significant difference," she said.

But she also sees the value in reducing the number of plastic bags that could end up littering the city's streets.

"I mean, look around. If the wind’s blowing, it’s plastic bags versus brown paper bags. I think it’s good for the environment," Griffin said.

More than 300 U.S. cities and at least eight states have laws regulating single-use plastic bags, according to the Earth Institute at Columbia University. Some of those laws impose fees on their use, while others ban their use altogether, as Seelbach's proposal would.

"We are not pioneers here," he said.

Seelbach added that the ordinance would go through at least two City Council committee hearings before coming before the full council for a vote.

"This is not going to be rushed through. We want to hear from people. We’re willing to make changes if they make sense," he said.