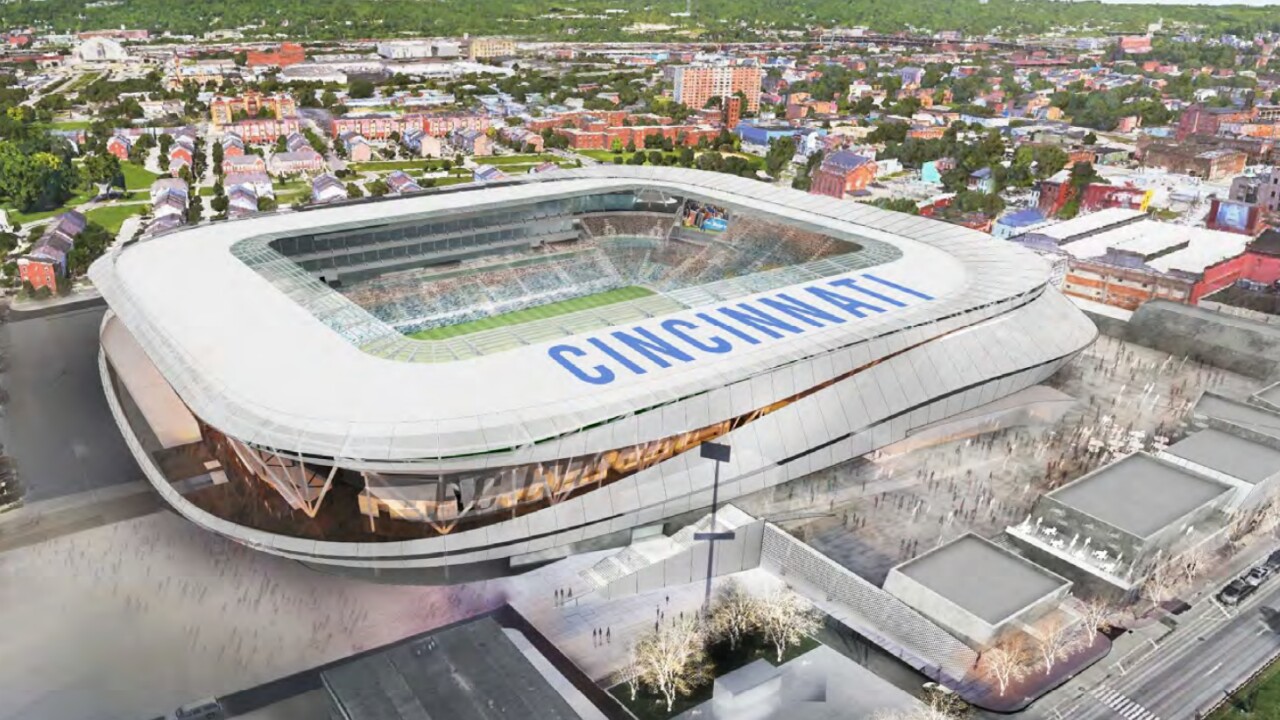 Editor's note: WCPO first published this story last month, before City Council gave its OK to develop a property in West End into a 26,000-seat stadium. We are republishing it this week as FC Cincinnati gets ready to host its first MLS home match on Sunday at Nippert Stadium.

CINCINNATI -- Negotiations around a proposed Major League Soccer stadium were in their final hours this morning as City Council prepared to hold a pivotal, final vote on the project Thursday afternoon.

It had been a process that seemed to drag on and -- at the same time -- to sneak up on us.

It feels that way because, while community engagement and discussions among stakeholders have been going on behind the scenes for months, it has only been a matter of weeks that the city's lawmakers have been able really to deliberate over the details.

In other words, it's been a long, twisty drama with an action-packed, high-stakes final act.

So for those who haven't been able to keep up with every step along the way -- or for those just tuning in -- here are nine things to know about FC Cincinnati's bid to build a new soccer stadium in the West End.

Not even a year ago, it was unclear where the club wanted to build its stadium. Throughout the course of negotiations, the team released drawings and renderings for three possible locations, two in Cincinnati -- one in West End and one in Oakley -- and another on Newport's riverfront.

Team officials were unequivocal in their desire to locate the team within Cincinnati's city limits, but didn't want to rule out the possibility for another stadium on the riverfront.

West End was the early favorite, but conversations there seemed to die quickly when, as recently as March of last year, club president Jeff Berding said negotiations with Cincinnati Public Schools -- who owned the property the team was eyeing -- as well as the neighborhood's community council were not going well. Both entities rejected initial proposals by the team.

Berding then turned to Oakley and Newport, perhaps to motivate West End stakeholders to loosen up their conditions. It didn't take long after that for the team, CPS and the West End to reach agreeable terms -- including a community benefits agreement that guarantees millions of dollars in investment back into the neighborhood. The team also agreed to build a new high school football stadium to replace Robert A. Taft I.T. High School's Stargel Stadium, which the team would acquire and demolish to make way for the new MLS stadium.

But even after CPS and the neighborhood came to terms with the team, resistance and protest did not stop there. Some felt putting a stadium in a dense, predominantly lower-income neighborhood would just continue patterns of gentrification being seen elsewhere in the city. Others felt it disrespectful to demolish the high school's stadium, given its history within the neighborhood.

And given the proposed site's location on the border between West End and Over-the-Rhine, OTR residents had concerns, too, and still do. Like some of their West End neighbors, OTR residents living near Central Parkway worry about how soccer games will create traffic congestion, noise pollution and engineer a parking nightmare for people who call the two neighborhoods home.

The team is privately financing the development of the $250 million stadium site. That includes the 26,000-seat stadium itself, an on-site parking lot, an on-site parking garage and future yet-to-be-determined developments on the property. The club has also guaranteed the city at least $400,000 in admission tax revenue annually, and will finance the replacement of police vehicle parking and an evidence processing facility that were part of a land-swap deal approved by the city.

The team is also financing a replacement for Stargel Stadium on a nearby lot across Ezzard Charles Drive from the high school.

Last year, City Council approved an ordinance that will provide roughly $35 million in utility and infrastructure updates to the area. The city will also allow the team to operate and collect parking revenues from the city-owned Town Center Garage on Central Parkway near the stadium site on regular season and playoff game days. The team will pay the city $150,000 for the rights to operate the garage and collect that parking revenue, starting in 2021. Starting in 2025, that annual rate will increase by $10,000, and the rate will continue to increase by $10,000 every two years after that.

Also last year, the Hamilton County Board of Commissioners expressed its commitment to building a second parking garage somewhere near the stadium site, but has not yet specified precisely where or how big.

The team made other financial commitments when it signed a community benefits agreement with the West End Community Council. See more on that below.

City Council's vote Thursday will not be to approve the final design details of the stadium and surrounding site vicinity. The way the City Charter structures large-scale development projects like this, to some, is a little counterintuitive.

Here's how it works: Things like sports stadia can only be constructed in areas that are zoned for them. Since West End is predominantly residential, building a stadium there requires a zoning change for the parcels of land that will hold the stadium and its other subsequent facilities.

So when City Council members vote today, they will be voting to approve the boundaries of the stadium campus as well as how tall the structures can be -- and nothing else (although some feel other political forces are informing some council members decision to approve the zoning change).

The charter leaves final decisions on the stadium's look, the position and size of on-site parking facilities, and sound and traffic engineering up to the planning commission. The team has moved through several phases of stadium design plans -- including what became an unpopular aspect of the design that created an orange glow around the stadium at night -- but has not offered a final design proposal.

This process leaves some worried that City Council -- and, by extension, their constituents -- don't have enough of a say in the process, since the commission is an appointed board made up primarily of non-elected members. City Council does have one seat on the commission, currently held by Vice Mayor Christopher Smitherman, but he has abstained from all discussions and votes pertaining to the stadium deal because his brother owns a business that has won a contract for part of its construction.

4. Some West Enders feeling pushed out

While the team did not acquire any residential property in West End for its stadium site, it did require the purchase of multiple privately-owned parcels, including a building that used to house Monica's Just Cookin' restaurant.

The owner, Monica Williams, said she wanted to stay in West End but couldn't find a new space to rent that she could afford for her business.

Another neighbor -- the Cincinnati Ballet -- did not lose their rehearsal facility that sits adjacent to the proposed stadium site, but when the club acquired its land for the development, that footprint included a parking lot the ballet company has come to rely on for its members and other visitors to the building.

As recently as last week, City Council members decided to hold its vote on the team's requested zoning change until the team could work out terms to facilitate a new space for Just Cookin' and a deal to ensure the ballet still has access to nearby parking.

Berding characterized council's decision as part of an effort to extract money from the team for these private businesses.

As of this writing, the team, the ballet and Williams were still negotiating terms to settle their respective conflicts.

5. What to do with Central Parkway

Early plans released last fall indicated the team might ask the Cincinnati Police Department to close the portion of Central Parkway that will sit outside the stadium's main entrance -- that is, between 15th and Wade streets -- as well as closing some side streets to through traffic. Team officials said this would ensure the safety of the thousands of fans who will have to park elsewhere and walk to the stadium.

But some worry that would result in huge traffic swells along other north-south streets, mainly in Over-the-Rhine, such as Elm, Race and Vine streets. In a January 23 motion, City Councilman Chris Seelbach called on his colleagues to reject any plan that would require closing Central Parkway on game-days.

"Central Parkway is a critical artery for our city, connecting numerous neighborhoods and providing a critical north-south artery for the core of Cincinnati," Seelbach wrote in his motion. "Traffic on adjacent streets (in West End and Over-the-Rhine) already hits critical mass during major events."

The motion did not hold much water in City Council, though: All street closures and safety policies surrounding the stadium will be decided at the discretion of Police Chief Eliot Isaac and his traffic unit.

It's no secret that parking in Downtown, Over-the-Rhine and West End can already be a nightmare. Throw a 26,000-seat event space on top of an already crowded space in a heavily car-dependent region, and there will be issues.

In order to qualify for the rezoning, the team had to demonstrate that there would be at least 5,000 parking spaces available within less than a mile from the stadium. The team is planning to build up to 500 spaces on the stadium site itself, and also calculates more than 8,000 spaces available elsewhere throughout Over-the-Rhine, Downtown, The Banks and Queensgate.

The team's traffic and parking engineers did not factor in parking at OTR's Washington Park or Mercer garages due to their popularity for visitors to the neighborhood coming for other events.

The night before City Council's Economic Growth and Zoning Committee first began considering the team's request to rezone the site for stadium construction, an until-then unseen hurdle fell in everyone's lap when the Cincinnati Arts Association released a preliminary study suggesting cheers and shouts from fans during soccer matches would be heard in Music Hall's main performance space.

"The noise would be readily audible by the audience and the performers and would interfere with the subtle moments of performances by the resident companies," wrote researchers with the acoustician firm that conducted the study, Akustics.

In the committee meeting the next day, Berding told City Council members that his team's sound engineer was reviewing the study, but that he felt confident any noise conflicts could be worked out by coordinating event schedules.

In the days to follow, Music Hall officials said they reached a satisfactory agreement with the team.

Part of FC Cincinnati's deal with the neighborhood they will eventually call home was negotiating a community benefits agreement with the West End Community Council and the city. The goal was to ensure the stadium development wouldn't just benefit the team, but the surrounding neighborhood, as well.

Some details of that agreement include:

Team officials have said that, in order for the stadium to be ready to host home games, construction must begin in March 2019 -- in other words, by the end of next week. City Council has already postponed its zoning vote once, and Berding has hinted at how that has already cost the team money in extra construction costs and delayed labor contracts.

Any further delay could mean even more financial penalties if the team falls behind on its construction schedule.