'Don't rely on it': Study shows driver-assist features slow to react to kids, especially in the dark 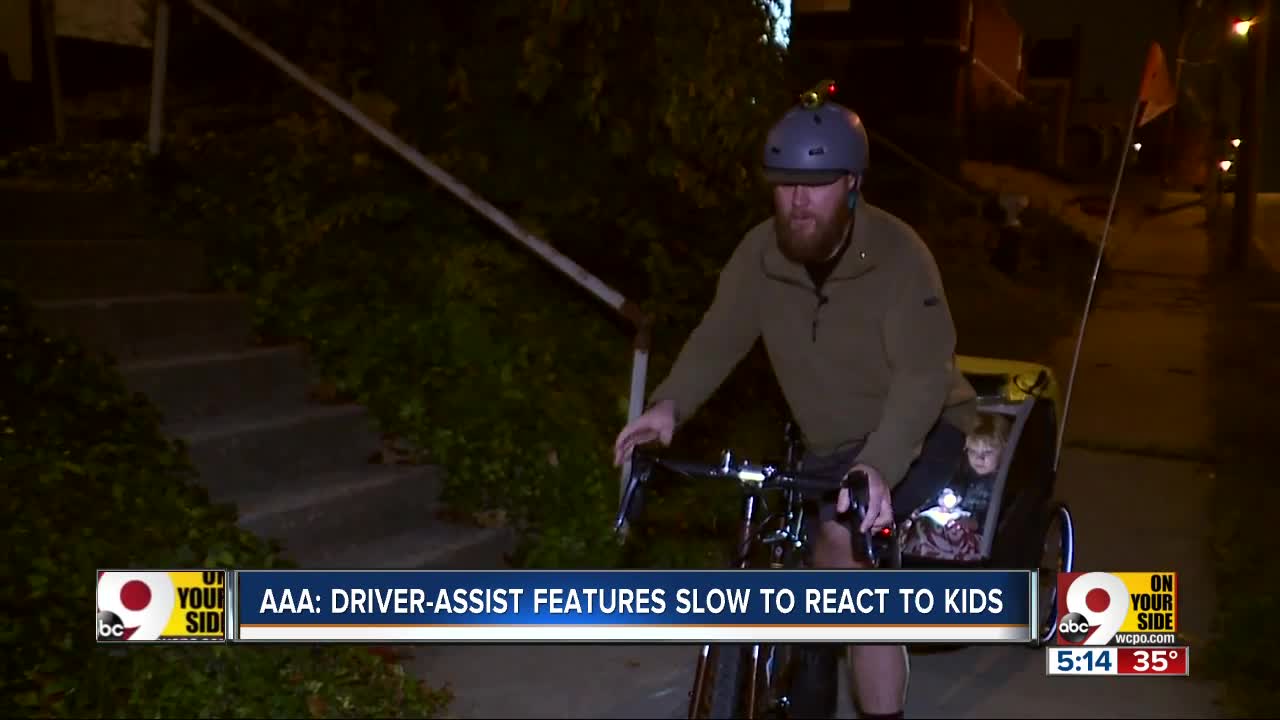 A recent AAA study tested pedestrian-detection and emergency auto-brake technology in newer car models, and the findings weren't so great, especially for our most vulnerable road users: kids walking to school.

CINCINNATI — When Gabriella Rodriguez left home to catch her Metro bus to Western Hills University High School the morning of Sept. 10, 2018, her day had already started well before the sun had started shining.

It was a sunrise she would never really see. Before she could catch her bus, two drivers struck the 15-year-old as she crossed Harrison Avenue. Later that morning, the promising first-year softball standout had died from her injuries.

Beyond jump-starting what has become an ongoing conversation about the safety of Cincinnati children walking city streets to school each morning, Rodriguez's death also caught the attention of another West High mother, Jennifer Hansel.

"It crushed my heart just because it was a child leaving home going to school," she told WCPO.

Hansel grew up in Northside and now lives in Westwood with her husband as well as 10 children and stepchildren, one of whom attends West High. Three more attend the adjacent Gilbert A. Dater High School. She said she won't let her children walk the mile up Queen City Avenue from their Gehrum Lane home because she worries they might not come back.

Pedestrian fatalities have increased nationwide over the last decade, and distracted driving has become a concern intensified by the growing popularity of smartphones and increasingly large display screens on dashboards, among other factors. As a result, vehicle manufacturers are developing automated features such as pedestrian detection sensors and auto-braking systems to assist drivers when they might not have the opportunity to react before an oncoming collision.

But the effectiveness of these systems is still in question. According to a AAA study released in October, crash-prevention failure rates among certain car models featuring this technology were "alarming," the auto club said in an Oct. 3 news release.

Part of AAA's concern: The study found that, when it comes to detecting children at speeds as low as 20 mph, the sensors and braking systems failed to prevent a collision 89% of the time. Whether detecting a child or an adult in dark conditions, those systems failed every time, according to AAA.

'We shouldn't have to make our kids wear the neon jackets'

It was roughly 6:43 a.m. when police responded to the scene where Rodriguez lay in the road after two drivers struck her, one of whom fled and remains at large. The sun wouldn't rise that day until 7:29 a.m.

According to national traffic crash data, roughly three in four pedestrian fatalities occur before dawn or after dusk. Out of more than 170 Cincinnati children struck by vehicles since Jan. 1, 2018, roughly 50 — 29.4% — were hit in the dark, according to Cincinnati police data.

Of six child pedestrians killed in Cincinnati traffic crashes since 2015, three were hit when it was dark or just getting light.

Cincinnati Public Schools saw an alarming 13 students struck while walking to school between May and December 2018, and this year — the first full year the district has tracked such crashes — has seen at least 10 incidents, according to WCPO's count.

Hansel's four high school-aged kids currently catch a Cincinnati Metro bus that picks them up at the end of their street each morning. When asked if she would be comfortable letting her kids walk the mile up the hill to school instead: "Never."

She's gone so far as to keep her kids home if there is no other option but to walk, she said, even if it means risking a truancy violation.

"Yeah, I was scared of truancy, but to keep my kids safe? I wasn't letting my young kids, because at the time they was young, I wouldn't let them walk to school."

Her biggest concern is the darkness itself.

"This is a dark street. Once you leave the street at dark, you can't see halfway down the street," she said.

Drivers' speed is also an issue.

"I live off Queen City (Avenue). Queen City is the worst street to go up and down because they use it as a race track," she said. "All day long they fly up and down that street. Honestly, if you want my opinion, they should put speed bumps on that street."

Wes Crout knows all about getting his kids to school in the dark without a car, but his is a unique and specialized approach.

He's known around Walnut Hills as the guy who bikes his two young daughters to their nearby school buildings, decked out with blinking lights and flags, hauling the girls in a yellow reflective trailer.

"It's a very walkable and bikeable neighborhood," he said. "The occasional times that I may drive them to school, they get pretty upset that we're not taking the bike."

But like Hansel, he still worries because Walnut Hills has its own "race track" on McMillan Avenue.

"For better or worse, Walnut Hills is a commuter thoroughfare that people can drive through, and a lot of times they drive quickly," he told WCPO.

One protection Crout relies on is the reflective gear outfitted on his bicycle, but he worries not enough people who are walking consider it as an option.

"They usually consider (their walk) to be a very short part of their day, so they're not going to dress for that," he said.

Both he and Hansel agree, though: "We shouldn't have to make our kids wear the yellow jackets, the neon jackets, but that's what it's coming down to."

Crout said his experience as a cyclist and in getting his kids to school has made him more attuned to the challenges facing pedestrians and drivers in dark conditions.

That's why, in part, the one vehicle in his household is a 2018 model that features pedestrian-detection sensors and emergency auto-braking technology.

"We could have chosen to get the lower model without it, but it seemed like that for the price that it was there, it was good to have it," he said. "The auto-braking technology is really what we cared about with that."

Among AAA's key findings were:

Despite these findings, Crout said he hasn't been in a situation in which the features have failed.

"In the few scenarios we've had, it's actually worked really well for us," he said.

That doesn't mean Crout counts on it.

"My main thing is: Don't rely on it," he said. "It is a tool that might help you in certain scenarios, but it's not something that you should rely on -- or, at least not yet."

That's University of Cincinnati Professor Jiaqi Ma's take, too. Ma heads up UC's Advanced Transportation Cooperative and spends much of his research time testing and developing improvements for automated vehicle technology. He makes a big distinction between fully automated technology — like what you would find in a self-driving car — and "driver-assist" technology, which he said describes most of the examples on the market today.

"In this case of 'driver-assist,' the driver is responsible to stay alert and make decisions," Ma told WCPO. "The vehicle is only detecting that for you and warn you to that.

"You're not supposed to let it do it by itself."

Although the owner's manuals in models boasting these systems do indicate that these are only driver-assist technologies and that they'll work only in certain conditions, Ma worries that the public perception has not fully grasped the distinction between fully automated and driver-assist.

"(Manufacturers) are promoting their functions like they're AV vehicles, that they can drive autonomously," he said. "I think that there's a misconception in that perspective. So nowadays people are surrounded by this sort of a fantasy world of autonomous driving, but then have to face the fact that all the commercial vehicles today does not have the capability of full autonomy.

"This is something people need to know, and I don't think people know that."

Ma recommended that, before hitting the road in a driver-assist vehicle, drivers should review the owner's manual and study the limitations of their vehicle's safety features.

'Something's got to give'

With the ongoing string of CPS students being struck by vehicles on their way to school, it's a problem that's on CPS Board of Education member Mike Moroski's mind.

"Right now, the most dangerous place for our students is on the streets of Cincinnati," he told WCPO, pointing specifically to Ferguson Road outside Dater and West High. "Right there is like a highway. A lot of roads in Cincinnati are built to encourage speeding, quite frankly."

He also said he's skeptical of the driver-assist and automated features and, sharing Ma's concerns about how the public perceives these features, thinks they might actually make things more dangerous.

"It's designed -- whether on purpose or not -- to make being inattentive easier," he said. "It's like, 'I don't have to pay attention because this thing is paying attention for me.' And I think that's a really dangerous precedent. The best way to not run over a child is to put down your phone and to watch what you're doing."

Moroski and the board, along with the city administration, have taken some steps in an attempt to alleviate the problem. On Ferguson, the city has installed new LED lighting and additional pedestrian crossing signage along Ferguson Road, outside Dater and West High. More broadly, both the city and the school district have committed to pursuing "Vision Zero" policies, with the expressed goal of reducing pedestrian traffic fatalities to zero.

Another potential, partial fix, Moroski said, was to change school start times, something the board recently adopted. The resolution requires all district high schools to transition to a start time of 8:30 a.m. or later by the school year 2021-22.

The plan doesn't come without its complications. Part of the reason different schools have started at different times was to coordinate with Cincinnati Metro, which provides CPS high school students with free passes to ride to school.

"We provide them access to Metro because it's the right thing to do, but it is tough. It is difficult. However, I can't abide by any statement that begins, 'We know it's great for students, but...' It was difficult, but we figured it out," Moroski said.

Still, Hansel is waiting for the day she won't have to worry as her kids walk out the door each morning.

"Something's gotta give, and it needs to be soon," she said. "Because there's just too many babies being took from too many families."