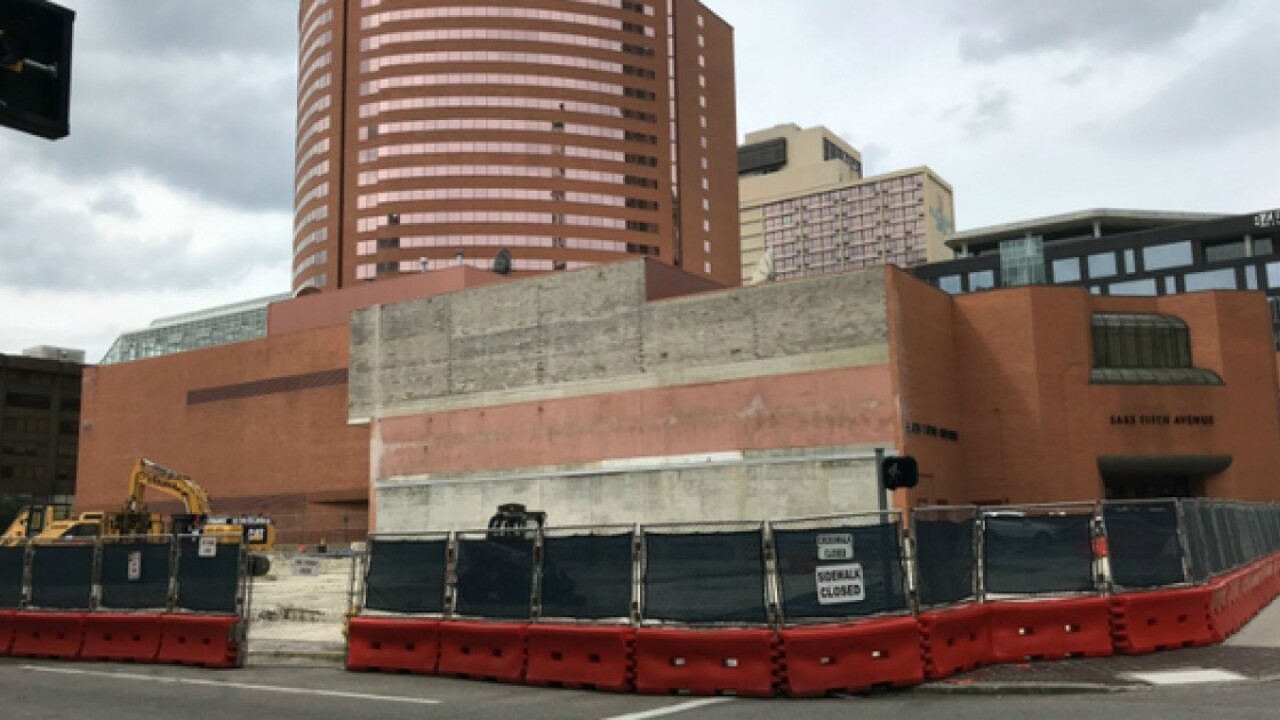 CINCINNATI — No matter how you get around downtown Cincinnati, if you can possibly avoid Fourth Street for the foreseeable future, do it.

Fourth Street provides direct access to northbound Interstate 75 for afternoon commuters heading home from work, but over the next year -- at least -- large portions will be subject to various closures due to multiple construction projects either already underway or in the works, according to a Feb. 12 memo signed by City Manager Patrick Duhaney.

The memo stated that the city administration "is proactively working with the various stakeholder groups potentially affected by these various projects to help minimize traffic impact throughout the busy Fourth Street corridor."

The memo outlines six projects that will require lane and sidewalk closures -- or some combination of both -- throughout the remainder of 2020 and into 2021.

The high-rise development at the corner of Fourth and Race streets has had the sidewalk between Race and Elm streets closed for months, and Duhaney's memo indicated pedestrians should expect it to remain closed until 2021, along with the north curb traffic lane.

The memo did not state when in 2021 the city anticipates these areas will reopen.

Ingall's Building at Fourth and Vine

Another rehab project that has been underway for months, this project has nearly half of Vine Street's east sidewalk closed between Fourth and Fifth streets, as well as the east curb lane.

City officials anticipate this project should conclude by October 2020.

A proposed renovation at the Fourth and Walnut Center -- sitting at the southeast corner of the intersection -- will require closing the adjacent sidewalk as well as the south curb lane along Fourth Street in addition to closing the east sidewalk on Walnut Street.

The memo did not indicate a start date for the project; although, Department of Transportation and Engineering officials met with the developer earlier this week to discuss plans.

Tire Discounters at Fourth and Elm

The tire and auto service company's downtown Cincinnati headquarters has already begun with renovations to a building at the southwest corner of Fourth and Elm, requiring the closure of the sidewalk and south curb lane along Fourth Street. The memo indicates that these closures could wrap around to Elm Street as concurrent Duke Energy gas main work progresses.

City officials expect this project to wrap by October 2020.

Duke Energy has acquired permits to replace an existing gas main along Fourth, Sixth and Sycamore streets over the next several months. The project began on Sixth Street last month, will continue onto Sycamore in February, and will hit Fourth Street in March or April.

Duhaney's memo indicated this project should complete by fall of this year.

The energy provider has requested vault access near this intersection to add communications equipment and replace the vault's roof.

The city has not determined a timeline for this project, but officials expect it will take about a month to complete once started, the memo stated.