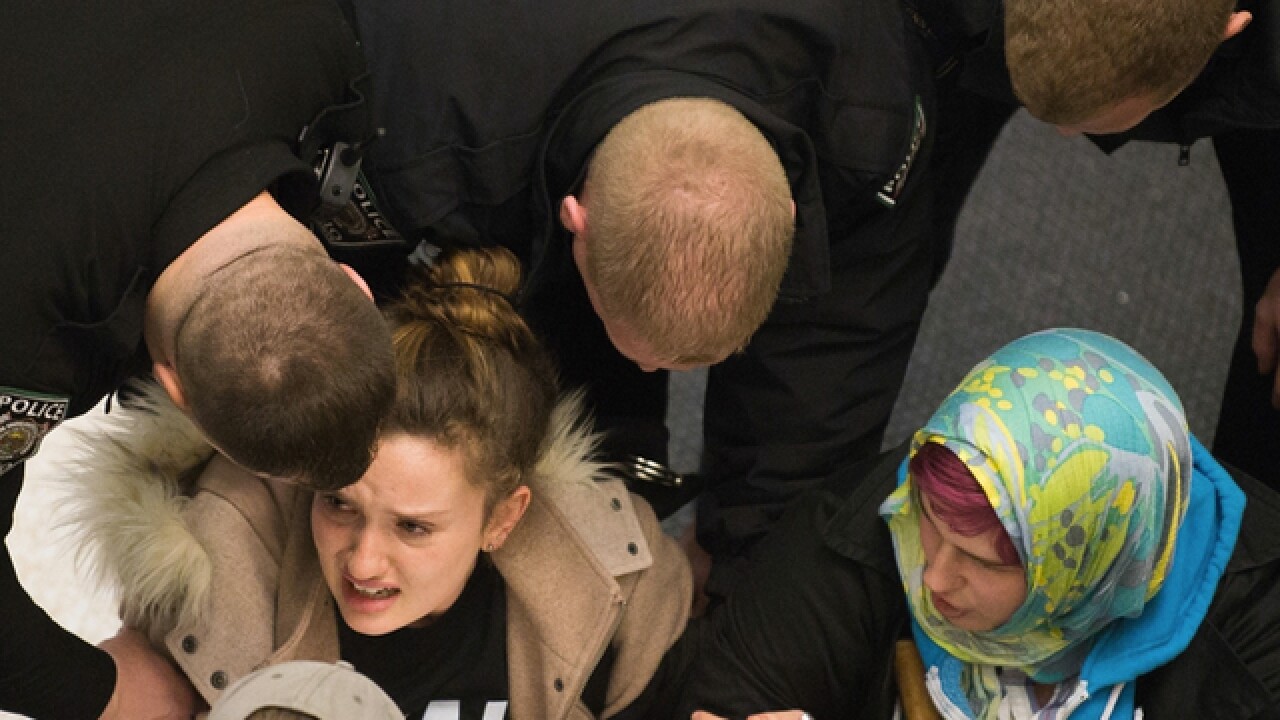 <p>A student is arrested by police during the anti-Trump protest and sanctuary campus sit-in in Baker University Center on Wednesday. | Photo by Emma Howells of The Post</p>

ATHENS, Ohio -- Police arrested more than 70 protesters at an anti-Trump demonstration Ohio University Wednesday night, according to the university. Campus newspaper The Post reported that hundreds of demonstrators had gathered at Baker University Center to voice their opposition to President Trump’s immigration ban and call for OU to become a "sanctuary campus."

Sanctuary campus, like the term "sanctuary city," is not a legal term. Instead, it is a colloquial descriptor for universities that limit their cooperation with federal immigration services.

Student speakers at the protest echoed common criticisms of the president’s executive order on immigration, which temporarily suspended immigration from seven predominantly Muslim countries and placed the United States' Syrian refugee program on indefinite hold. Since its implementation, the order has barred legal immigrants, visa holders and green card holders from entering the country and been criticized by other lawmakers for its sudden rollout.

In light of Trump’s campaign promise to enact "a total and complete shutdown of Muslims entering the United States" and the order’s provisions for continuing to accept refugees who belong to a non-majority religion in their country of origin, the order has been dubbed a "Muslim ban" by critics such as former Acting Attorney General Sally Yates.

Around 70 protesters were arrested tonight in Baker Center by members of local law enforcement. I was there covering it for @ThePost. pic.twitter.com/yswHDWuSHV

"I’m a Muslim, so it deeply bothers me that there can be such an outright racist law or executive order that is passed," rally spokesperson Bobby Walker told The Post. "It bothers me, of course, but more because I’m thinking of Muslim friends and comrades who cannot freely move."

The protest began outside Athens courthouse and proceeded into the student center, where students gave speeches, played guitar and staged a peaceful sit-in, according to posts re-tweeted by The Post.

One individual broken out a guitar while protesters wait for others to be released from custody #SanctuarySitInOU @ThePost pic.twitter.com/fZOi8ihBft

Ohio University representatives wrote on Facebook late Wednesday night that over 70 participating students had been arrested and charged with criminal trespass because the demonstration disrupted university operations.

"OUPD and university administration worked together to arrange an alternate space for protestors (sic) to gather that would protect students, faculty and staff. … At approximately 7:22 p.m. OUPD Chief Andrew Powers delivered his first warning that anyone refusing to leave would be arrested within the hour," the university wrote.

Despite the arrests, the Ohio University Student Senate passed a resolution to make their university a "sanctuary campus," according to posts on Twitter.