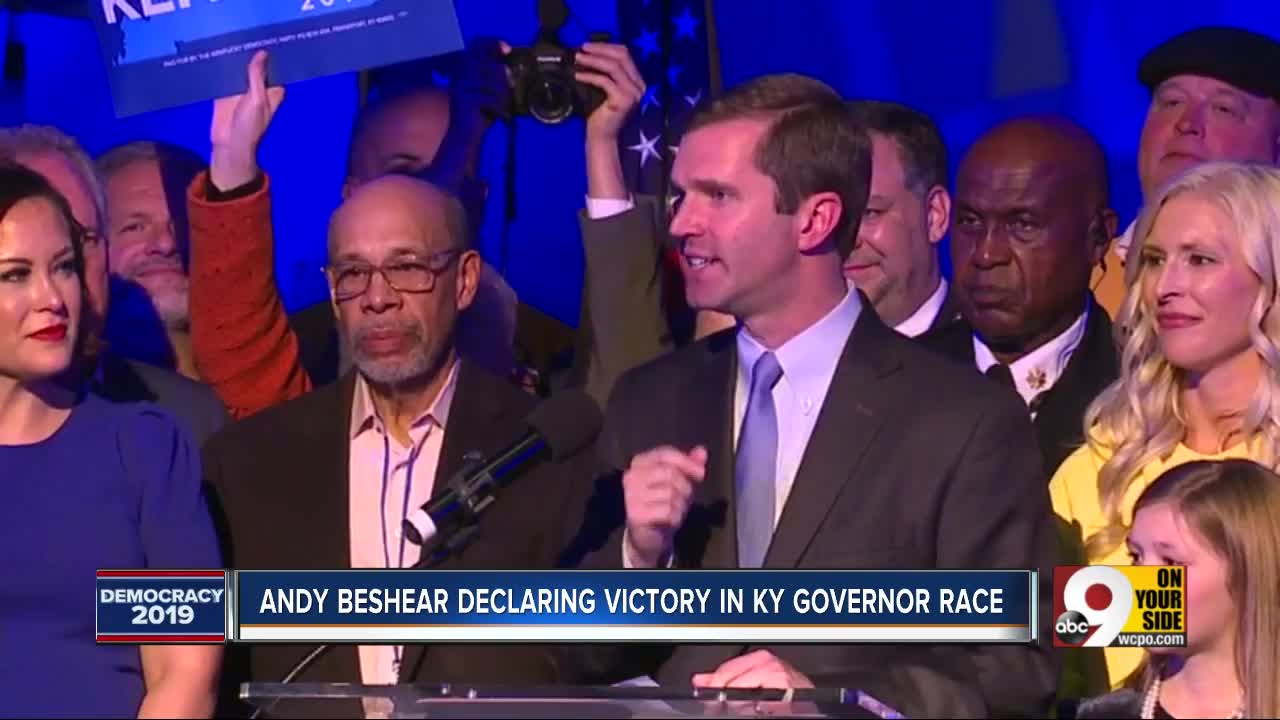 Kentucky Gov. Matt Bevin says he won't concede defeat to Democratic challenger Andy Beshear in one of the closest political races in history - a margin of 4,658 votes out of more than 1.4 million cast, according to the unofficial tally. 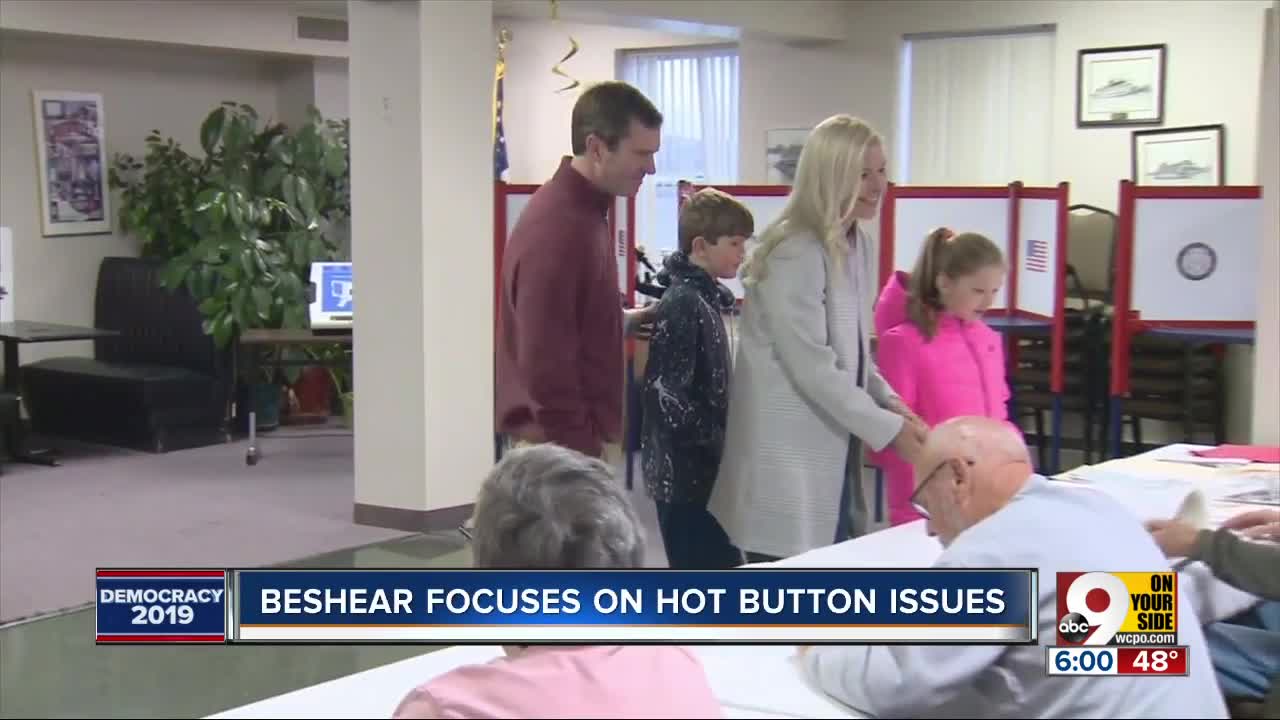 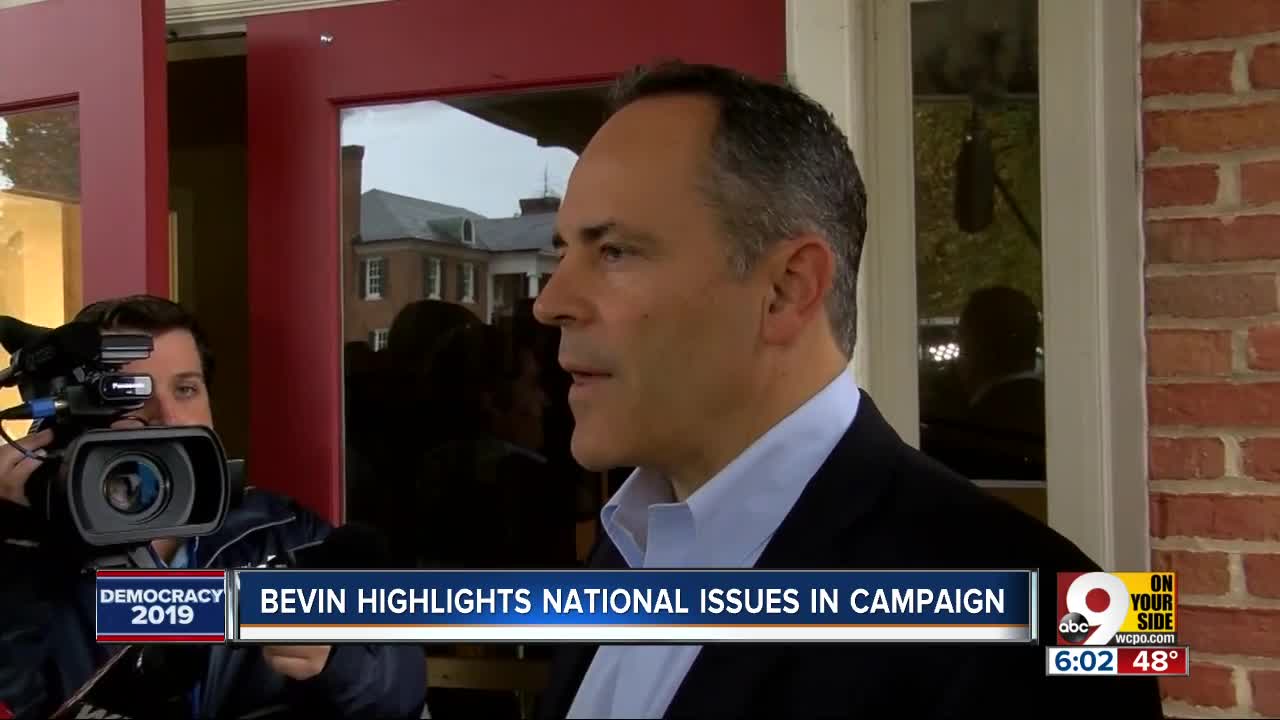 LOUISVILLE, Ky. — Kentucky Gov. Matt Bevin says he won't concede defeat to Democratic challenger Andy Beshear in one of the closest political races in history with a margin of 5,150 votes - 0.36% of more than 1.4 million counted, according to the unofficial tally.

Bevin told supporters Tuesday night that the process needs to be followed in such a close race - an apparent reference to Kentucky's three options for trying to overturn the outcome. Bevin knows the process because his opponent challenged his 2015 Republican primary victory.

If Tuesday's results stand up, Beshear can thank Northern Kentucky - specifically Campbell, Kenton and Boone counties - for putting him over the top. Beshear won two of the three counties that Bevin swept in his 2015 victory over Jack Conway. More importantly, Beshear reduced Bevin's overall margin of victory in the three counties by 13,791 votes, from 17,543 to 3,752.

That effectively won the election for Beshear. If Bevin had those extra 13,791 votes this time, he would have been re-elected.

"Would it be a Bevin race if it wasn’t a squeaker?” Bevin said.

WHAT’S NEXT? @GovMattBevin says his people are working on it. I found this @universityofky breakdown to be a helpful explainer. you have to litigate for a recount but can do a recanvass h/t @TVNewsGuru https://t.co/7ZArDVvqdm

There is no mandatory recount in Kentucky, but a candidate can go to court and sue for it.

For his part Beshear declared victory and told his supporters that he hoped Bevin would honor the election results. The tally left Beshear with 709,673 votes to Bevin's 704,523.

Tuesday's election saw Beshear win Kenton and Campbell counties and, though he lost Boone, it was with a much smaller deficit that Conway had in '15.

Beshear thanked his family and also acknowledged teachers. During the campaign, Beshear exploited Bevin’s feud with teachers over pensions and education issues, an issue that resonated with voters.

“To our educators, this is your victory,” Beshear said.

President Trump's campaign manager said the top Republican "dragged Bevin across the finish line," in a reference to Trump's appearance with Bevin at a rally at Rupp Arena Monday night. The statement said:

“President Trump’s rally helped five of six Kentucky Republicans win clear statewide victories, including Attorney General-elect Daniel Cameron, who will be the first black A.G. in Kentucky history and the first Republican to hold the office since 1948. The President just about dragged Gov. Matt Bevin across the finish line, helping him run stronger than expected in what turned into a very close race at the end. A final outcome remains to be seen.”

Republicans swept the other statewide offices.

Cameron, who was backed by Trump and Senate Majority Leader Mitch McConnell, will be the first Republican in 70 years to be the state's top prosecutor.

Attorney and former elections board member Michael Adams will be Kentucky's next secretary of state. He will succeed Grimes, who is in her second term and could not run again due to term limits.

When polls closed Tuesday, Bevin repeated his prediction of a big victory over Beshear.

"We're cleaning things up and I think you're going to see that evidenced by the fact that people are turning out and they want better government, they want cleaner government, less corrupt government, and we'll find out today what happens," said Bevin, who would have become the first Republican to win re-election in the Commonwealth.

"I'm also really excited because these last six days I've been criss-crossing Kentucky, and I see a state that is ready, ready for a change in leadership, who cares about every single family, and is ready to lead us forward," Beshear said.

Despite rain, a higher than usual Tuesday turnout was expected. In one Louisville neighborhood, 25-year-old Rin Mohan says her social media feeds were full of pictures from friends wearing bracelets that read, “I voted today!”

Mohan said “national politics has galvanized a lot of people my age. It’s hard to get people to take local elections seriously, but I think a lot people see Matt Bevin as a stand-in for Trumpism, and they see this vote as against that.”

Around the state, Trump, pensions, education and abortion were among the issues on voters’ minds.

After voting for Beshear, retired Ashland teacher Nancy Ross said she could never support Bevin for reelection because of his stance on education and his alignment with the president.

Donna Barker, a retired teachers assistant, said she voted for Bevin because his background in business allowed him to make tough decisions on pensions and reproductive rights.

For Elizabeth Burke, a deli manager, the race came down to religion. She said she wasn’t excited about either candidate but voted for Bevin because of his stance on reproductive rights.

This is from earlier today. @AndyBeshearKY casts his vote in the KY gubernatorial election. @WCPO pic.twitter.com/Q0n6OzvikQ

Voting in Louisville, Jennings said he believes “the country is not only divided, but a large proportion of voters have become oblivious to the extreme peril that our democracy is facing.”

Tuesday's results could reverberate far beyond Kentucky. The race is being watched closely for signs of how the impeachment furor in Washington might impact Trump and other Republican incumbents in 2020.

Senate Majority Leader Mitch McConnell has a particularly keen interest in the outcome. He’s on the ballot himself next year in Kentucky.

Get election results on WCPO.com and wherever you stream WCPO.