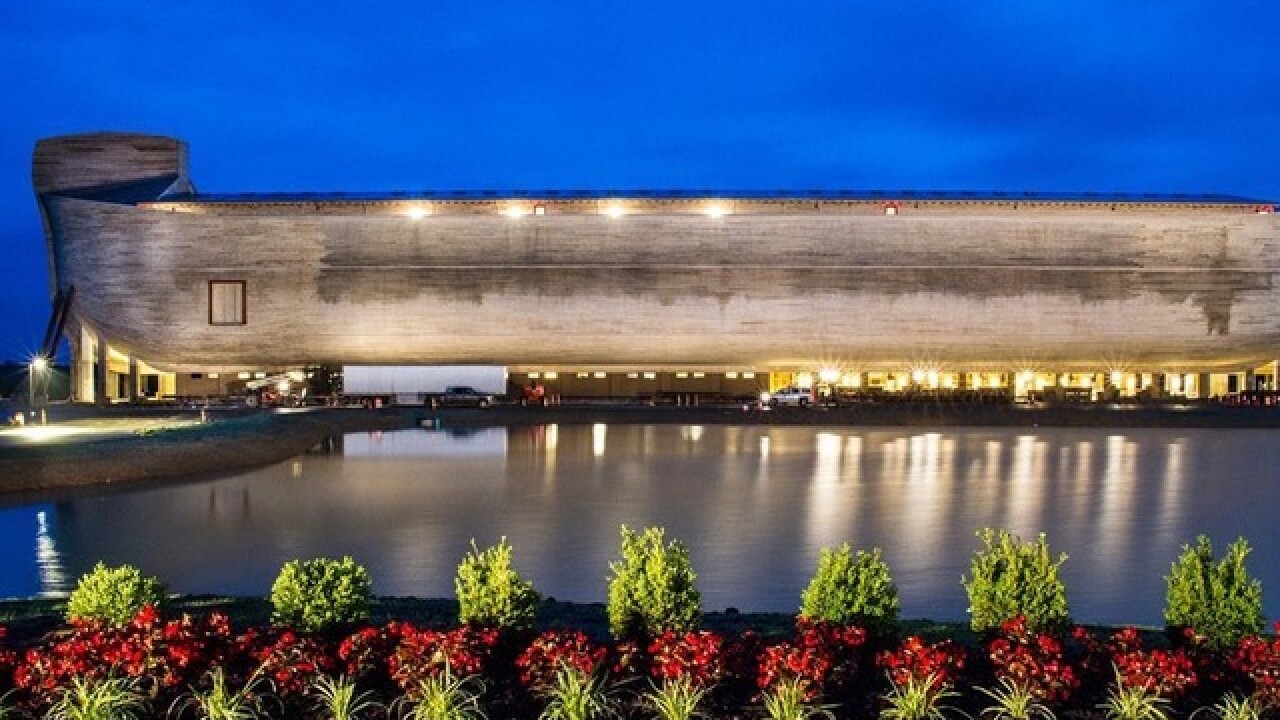 WILLIAMSTOWN, Ky. -- If you're not able to get to the monolithic Ark Encounter for its grand opening Thursday, here's your first look into the Biblical attraction in Northern Kentucky.

The Ark Encounter project, which was created by Answers in Genesis -- the same Christian organization that runs the Petersburg Creation Museum -- has attracted attention and controversy in equal measure since its inception.

The Tri-State Freethinkers plan to protest the attraction's grand opening on Thursday, along with the American Atheists, Secular Coalition of America, Freedom from Religion, United Coalition of Reason, members of the University of Cincinnati Secular Student Alliance, Kentucky Secular Coalition and Young Skeptics.

The Tri-State Freethinkers raised $10,000 for a billboard protesting Ark Encounter and Answers in Genesis. The billboard proposed design depicts Noah's Ark with people drowning around it and the words, "Genocide and Incest Park: Celebrating 2,000 years of myths."

LIVE on #Periscope: Inside the Ark Encounter @WCPO https://t.co/aF5TPnZWDz

The advertisement was turned down by billboard companies Lamar and Event Advertising and Promotions LLC.

"With our future Ark billboards, we will instead have a positive message to share about our family attraction coming to Williamstown," Ham said. "Freethinkers and other skeptics are very welcome to visit, and we are hopeful they will be open minded enough to want to learn more about an account in the Bible that is often censored in the public arena by anti-freethinking activists."

The Tri-State Freethinkers billboard will be displayed at Thursday's protest.

“Their mission is anti-science, the story is immoral, and they practice discriminatory hiring practices while receiving up to $18 million in state tax incentives," Tri-State Freethinkers President Jim Helton said. "We are making a stand for equal rights and the separation of church and state.”

Former U.S. president Jimmy Carter visited Ark Encounter in June. Video footage from his visit will be released Tuesday, according to a press release from Answers in Genesis.

The Ark Encounter's opening date was chosen to reflect Genesis 7:7, the Bible verse describes Noah and his family entering the ark for the first time.

The group will sell daytime and evening tickets for the first 40 days and 40 nights.

Answers in Genesis said it believes the ark will be the biggest timber frame structure in the world.

It will house 132 exhibit bays; the group said it expects to see 1.4 million to 2.2 million people each year.

The massive, 510-foot-long and 85-foot-high wooden boat is the $90 million first phase of a planned religious theme park. Answers in Genesis founder Ken Ham says work on the bow and stern will begin soon.

The park will also include a 2,100 seat restaurant and a 1,000 seat multipurpose room. It will also feature a large petting zoo.

The outer portion of the work should be complete by December.

The state had awarded an $18 million tax incentive to the project before withdrawing it last year over concerns of "religious indoctrination." The ark's builders are suing in federal court to get the incentive back.

Answers in Genesis built the nearby Creation Museum with $27 million in private donations. It opened in 2007.

For more information, go to Arkencounter.com for reservations.