Football captain killed in crash was 'Big Bad Brett' on the field, 'Teddy Bear' to classmates 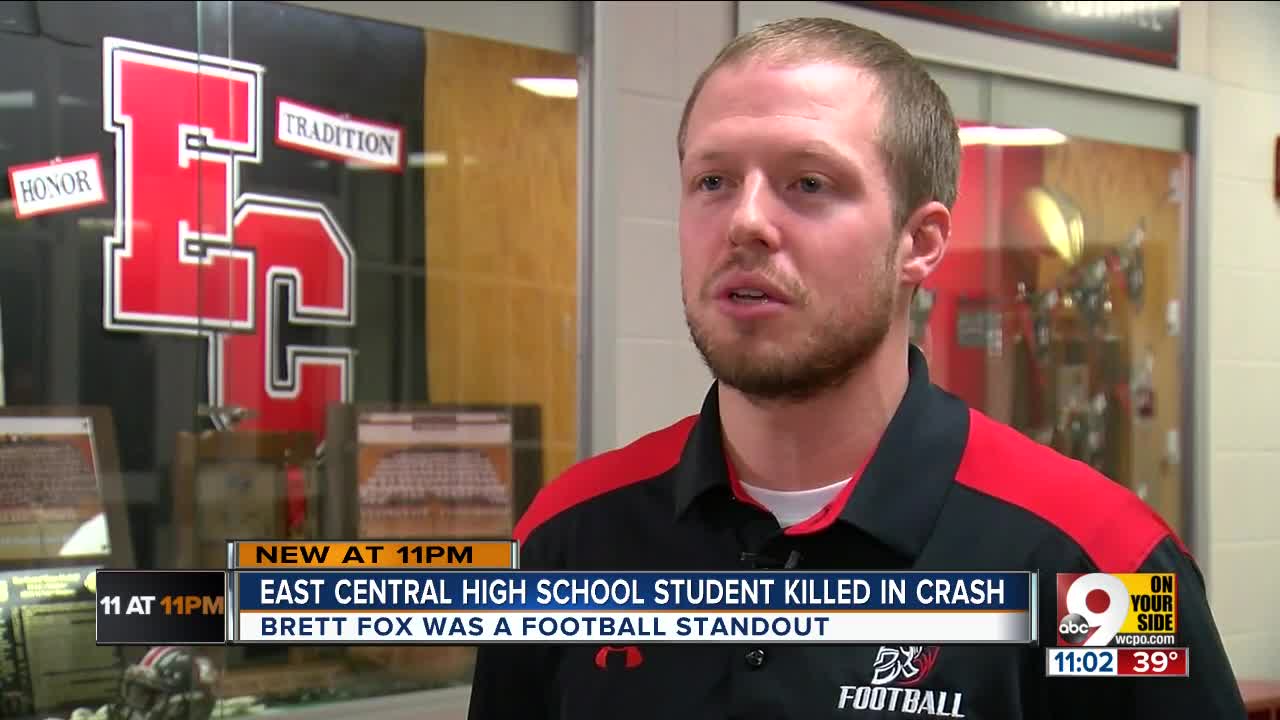 Some of Brett Fox’s classmates called him Big Bad Brett — an understandable epithet for someone with his wide, solid frame and status as one of East Central High School’s best football players. Still, longtime friend Dillon Fox preferred his other nickname: Teddy Bear. Beneath it all, he was “sensitive to the bone.”

ST. LEON, Ind. — Some of Brett Fox’s classmates called him Big Bad Brett — an understandable epithet for someone with his wide, solid frame and status as one of East Central High School’s best football players.

Still, longtime friend Dillon Fox preferred his other nickname: Teddy Bear. Beneath it all, he was “sensitive to the bone.”

A presence that large will be difficult to replace. Brett’s teammates were already struggling with the news of his imminent graduation and departure to Thomas More University Thursday morning when they learned he’d been killed in a car crash.

“You don’t think of stuff like this,” said Dillon, who is not related to Brett. “When I got the message about Brett, it was just immediately break down. I didn’t think it was real at first.”

Neither did coach Jake Meiners, who slipped between past and present tense to describe the boy he’d mentored for years.

“No matter the circumstances, Brett is always smiling,” Meiners said. “On the football field or in the classroom, he’s smiling and joking around, having a good time.”

He learned about the crash before Dillon — before the Fox family, even — and had to pull Brett’s younger brother out of his first-period class to keep him from hearing the news there. When the story broke for the whole school, some students burst into tears and exchanged hugs. Others went somber and quiet.

Meiners’s priority now, he said, is making sure all of those students understand there’s no wrong way to grieve. He also hopes the community will support the Foxes through their loss like Brett supported his fellow athletes through season after season.

“He was our emotional leader,” Meiners said. “Overall leader on our football team and our student body. He was always in the front of our student sections and cheering on the basketball team.”

He was also the second leading tackler on the football team, a member of the 2017 East Central team that took home a state title, and an Academic All-State honoree.

Most importantly to Dillon Fox, however, he was kind.

“He was a genuine, down-to-Earth kid with the biggest smile,” he said.

The Teddy Bear once gave Dillon a teasing nickname, too: Silly Dilly. Dillon hated it at first: “I said, ‘Please don’t ever call me that again.’”

Still, when he got the chance to write a memorial message on a tree near the crash site, Dillon didn’t hesitate.

Fox's family set up a GoFundMe to cover the cost of his funeral. Anyone wishing to donate can do so here.