Kasich: I'm not voting for Trump 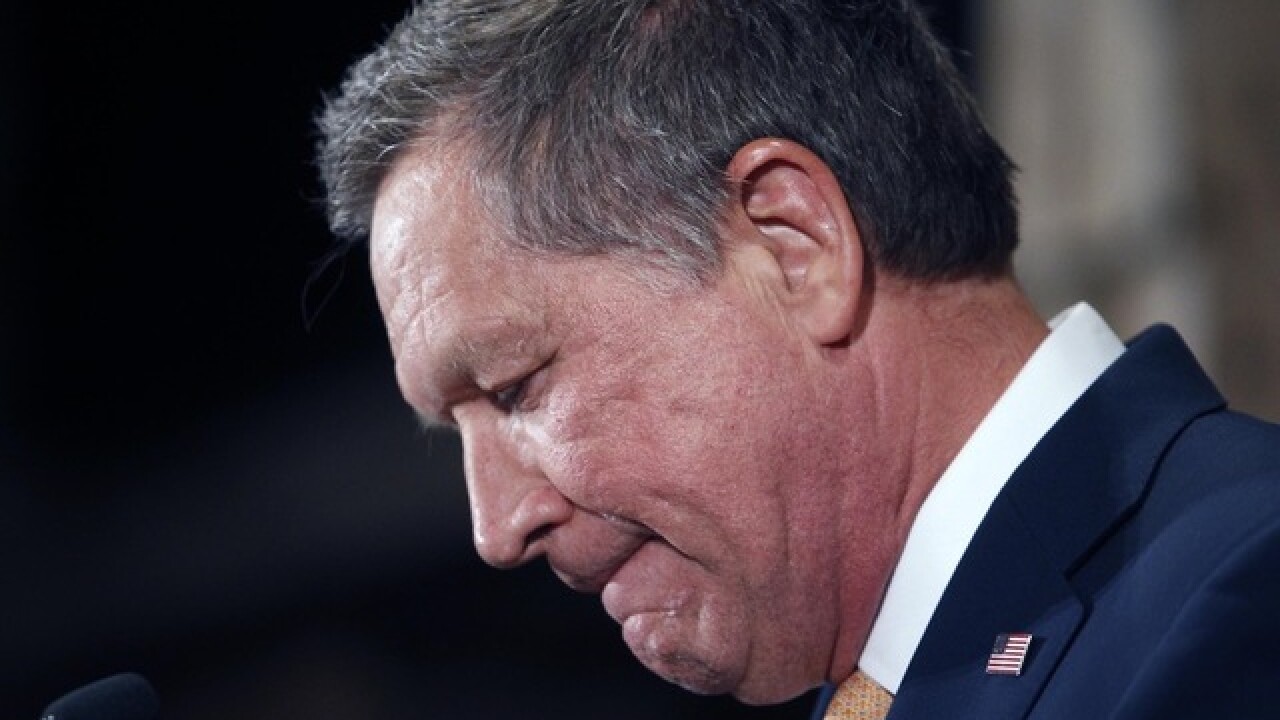 J.D. Pooley/Getty Images
<p>COLUMBUS, OH - MAY 4: Republican presidential candidate Ohio Gov. John Kasich speaks to the media announcing he is suspending his campaign May 4, 2016 in Columbus, Ohio. Kasich is the second Republican candidate within a day to drop out of the GOP race.</p>

CINCINNATI -- John Kasich's likelihood of voting for Donald Trump has gone from "miniscule" to nonexistent.

Kasich lost to Trump in the GOP presidential primary; he never endorsed his party's candidate and refused to attend the Republican National Convention in Cleveland over the summer. The governor said he simply couldn't get behind a man whose values and approach were so different from his.

Kasich tweeted Friday night that Trump's comments -- a story of a failed attempt to seduce a married woman and claims that his fame allowed him to become physical with women without asking for consent -- were "indefensible." Trump initially issued a brief statement Friday evening, then a formal video-recorded apology early Saturday morning.

Make no mistake the comments were wrong and offensive. They are indefensible.

It didn't sway Kasich, who said none of the developments surprised him.

"I've long had concerns with Donald Trump that go beyond his temperament," Saturday's statement from Kasich said. He detailed policy differences on trade, foreign relations with Russia and the national budget, along with differences in approach and vision.

"The actions of the last day are disgusting, but that's not why I reached this decision," Kasich's statement said. Instead, he said "it has been an accumulation of his words and actions that many have been warning about.

"I will not vote for a nominee who has behaved in a manner that reflects so poorly on our country. Our country deserves better."

Kasich previously said he wouldn't vote for Democratic presidential candidate Hillary Clinton. In mid-September, he told NBC's "Meet the Press" that his chances of voting for Trump were, at that time, "miniscule."

Republican leaders have widely condemned Trump's comments, though few have rescinded their endorsements of him. Trump's running mate, Indiana Gov. Mike Pence, said he was "offended" by the leaked video, saying he can't "condone or defend" Trump's words.

“I am sickened by what I heard today,” said Republican speaker of the house Paul Ryan, who uninvited Trump from a Saturday campaign event in light of the recording. “Women are to be championed and revered, not objectified.” Pence was going to attend the event in Trump's place, but a GOP official said he wouldn't be there.

"No woman should ever be described in these terms or talked about in this manner," a statement from Priebus said. "Ever."

Some Republican leaders have called on Trump to drop out of the race, but he said Saturday he'd never do that.

His son, Donald Trump Jr., canceled a planned visit to The Ohio State University on Saturday, according to student newspaper The Lantern. Trump is scheduled to hold his first Cincinnati campaign rally Thursday.