'They have been Mom and Dad from day one' 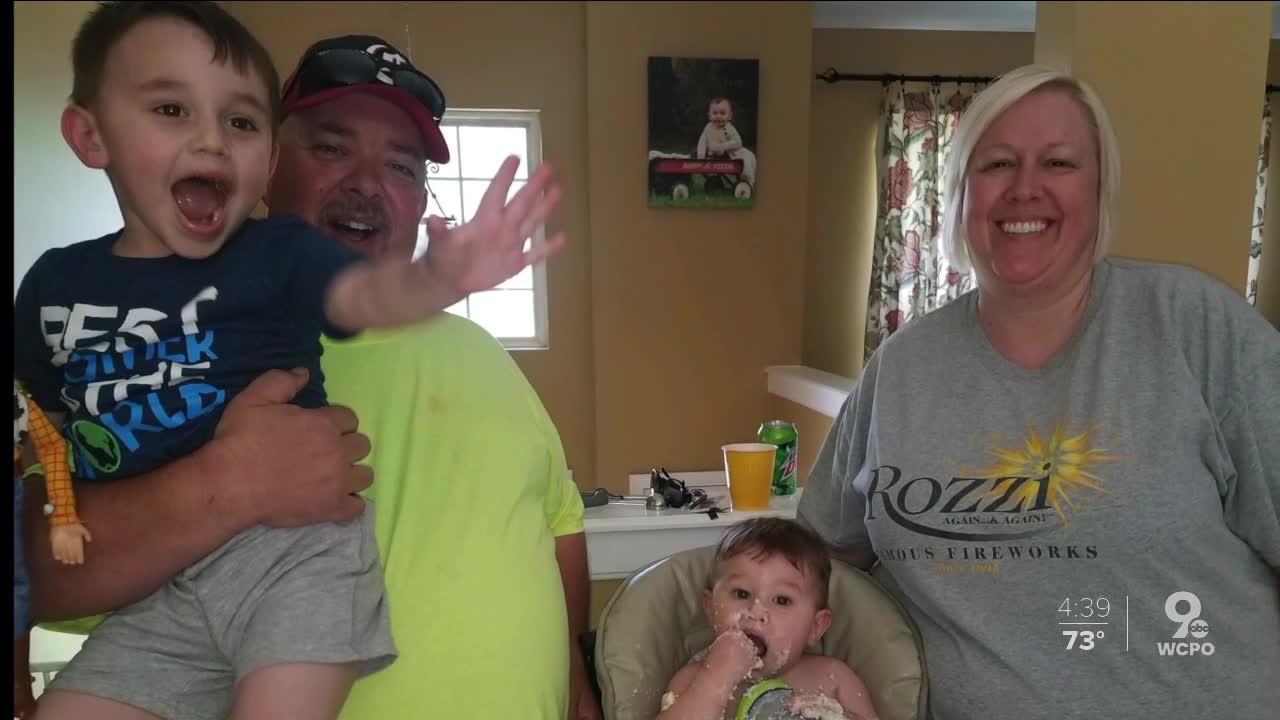 After a weekend of anguish, turmoil and hurt, this is a story about love. Marty and Nick Chilelli officially became Mom and Dad to 3-year-old Gage and his 2-year-old brother, CJ, during an unusual Hamilton County Probate Court hearing Monday using Zoom. 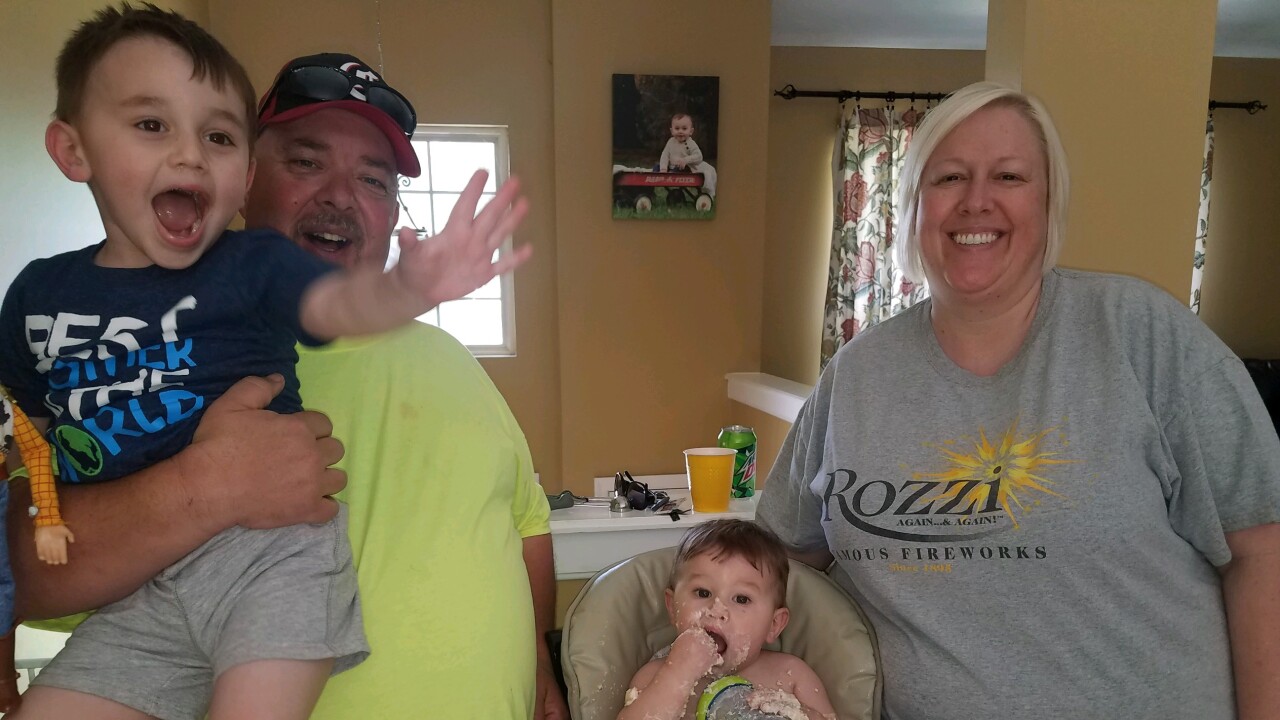 CINCINNATI — After a weekend of anguish, turmoil and hurt, this is a story about love.

Magistrate Kendal Coes presided over the adoption hearing, asking the Chilellis what being parents meant to them and asking family members whether they had anything they wanted to say about the couple.

Nick Chilelli, 51, has two grown sons from a previous marriage.

“Really we’re wanting to give these boys a good chance at life and help them grow up to be good, productive citizens,” he said.

Marty Chilelli is almost 42 and has ached to be a mom. She told Coes that, to her, being a parent meant “just loving them and guiding them into hopefully being young, successful gentlemen. Respectful.”

There was a slight pause before that last word as she reached for Gage, who seemed so excited he couldn’t stay still.

Who could blame him?

Shiny, silver balloons spelling “adoption day” floated above CJ, who sat quietly in the center of the family’s couch for most of the hearing with a sippy cup clutched in one hand and snacks at the ready. Gage kept walking back and forth to either end of the couch, where bunches of brightly colored balloons bobbed at either end.

“He’s just now calmed down,” Marty Chilelli said of Gage during a telephone interview with WCPO nearly three hours after the hearing ended. “CJ has always been more of our chill little guy, and Gage is our active one.”

The boys have lived with their new parents for most of their young lives.

‘We didn’t want to split them up’

The couple started talking about adoption at the beginning of 2017, Marty Chilelli told WCPO after the hearing.

“He knew I wanted children, and we just started talking about it, and we decided that was the way we wanted to go,” she said. “We’d foster to adopt, and if it didn’t happen right away, we were definitely willing to help families reunite.”

As first-time foster parents, the Chilellis decided they should work with an agency and decided on Beech Acres Parenting Center.

Within a few days of the couple getting licensed in 2017, Beech Acres called to say a 10-month-old boy needed a placement.

“He was brought to our house late at night so we didn’t have a lot of stuff yet,” Marty Chilelli said.

Family members and friends quickly rallied around the couple, she said, adding, “The next day we had whatever we needed.”

For months, the Chilellis worked to help Gage maintain his relationship with his biological mom, Marty Chilelli said.

“There was domestic violence. That was one of the main concerns with the safety of the children,” she said. “We tried to have some kind of relationship with her. If he was reunited with his parents, we wanted that to be happy for him.”

Beech Acres was a big help with that, she said.

Marty works at a dental office, and Nick works for a local energy company. When they were at work, Beech Acres staff would transport Gage for visits with his biological mom. Then Marty would pick him up afterward.

“They really were there when we needed them the most,” she said.

When the couple found out a few months later that Gage’s biological mom was expecting another baby, they did some soul-searching.

“We had a few months to talk about it and kind of decide what we wanted to do,” Marty Chilelli said. “We didn’t want to split them up. We wanted Gage to grow up with his sibling and just have them together.”

Little Carter James – or CJ – came into their lives when he was just 1 week old.

When it came time for the couple to petition the court for adoption, they had the option of going in person or having the hearing via Zoom. They chose Zoom, Marty said, because they didn’t want to risk exposure to COVID-19 for their boys and so family and friends could be part of the proceedings.

“He’s only a couple years younger than me, and I wouldn’t want to take on little kids,” she said, adding that her brother seemed reluctant to adopt young kids at first. “But now he wouldn’t have it any other way. He loves them so much, and I’m just proud of them for taking this one and making a great life for these two little boys.”

Marty’s cousin, Brooke Sullivan, struggled to hold back tears during the hearing.

“Although Marty is technically my cousin, she’s always been more like a sister to me and my best friend,” Sullivan said. “She’s always had a heart of gold and so much love to give.”

‘Mom and Dad from day one’

Sullivan always thought her cousin was born to be a mom, she said.

“Now I know she wasn’t born to be just any mom,” Sullivan said. “She was born to be Gage and CJ’s mom.”

Beech Acres foster care social worker Mandie Klosterman said the Chilellis’ love for the boys was apparent from the start.

“You could tell from the first day that they were already a part of this family and that they loved them with all their heart,” she said. “And they’ve done everything needed for these boys and have been great parents to them.”

“They have been Mom and Dad from day one that I have known them,” said Harrison, who was responsible for the boys’ case before they became eligible for adoption. “They welcomed these kids into their home and such a beautiful family and a beautiful home, and I’m just so happy that I got to meet them and be a part of this.”

“It’s been a long journey,” Nick Chilelli replied. “But very, very well worth the wait.”

With that, Coes made his ruling.

“I will now find sufficient evidence before me to grant this petition for adoption,” he said. “It’s certainly in Gage and Carter’s best interests. The Chilellis are suitably qualified.”

Coes explained that Judge Ralph Winkler will have to sign the final paperwork and suggested that a Hamilton County Job & Family Services caseworker could get all that to the family.

“God bless you, Mr. and Mrs. Chilelli,” Coes said before ending the hearing.

He already did, as it turns out, with two little blessings named Gage and CJ.

More information about Beech Acres Parenting Center and how to become a foster parent is available online.