Songs By Heart helps people with memory loss reconnect with themselves, the world 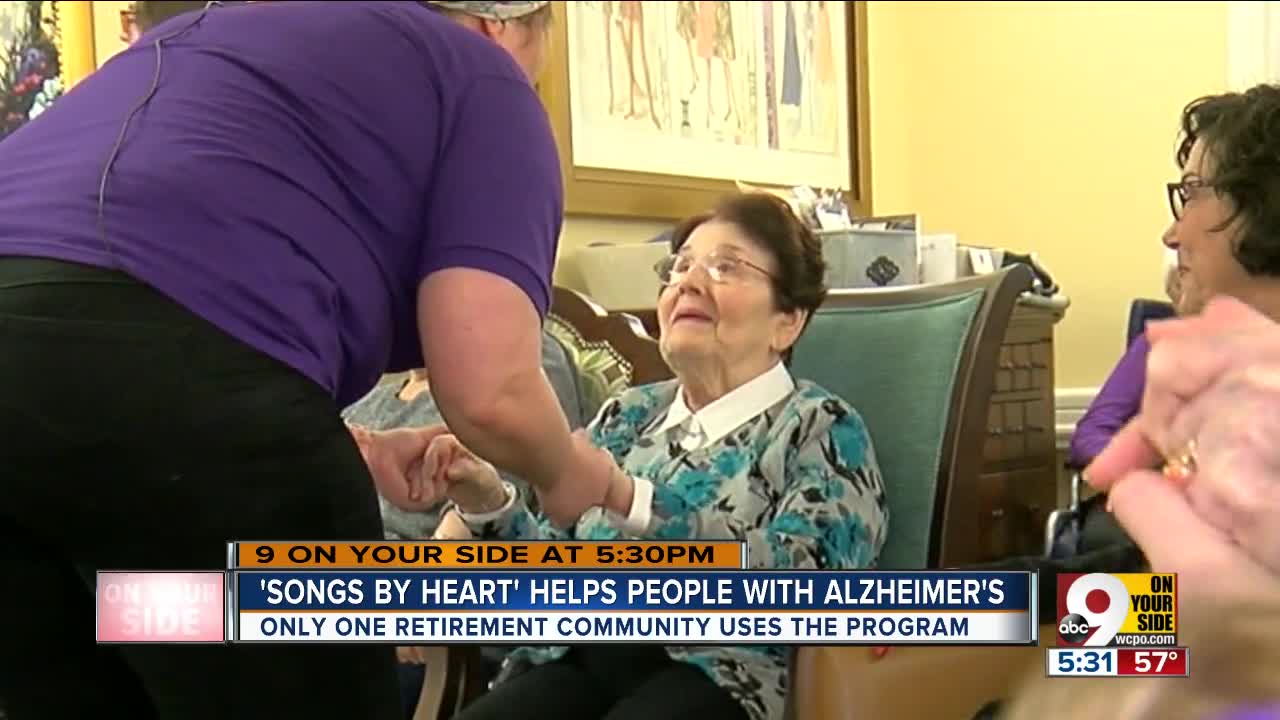 Ninety-four-year-old Frieda Garber has days where her mind can be foggy. But even on bad days, she's crystal clear when she takes part in a program called Songs By Heart at The Kenwood by Senior Star. As soon as pianist Lynne Miller and vocalist Clare Hingsbergen begin to perform, Garber’s eyes light up and she starts to sing along, said her daughter, Ellen Garber. 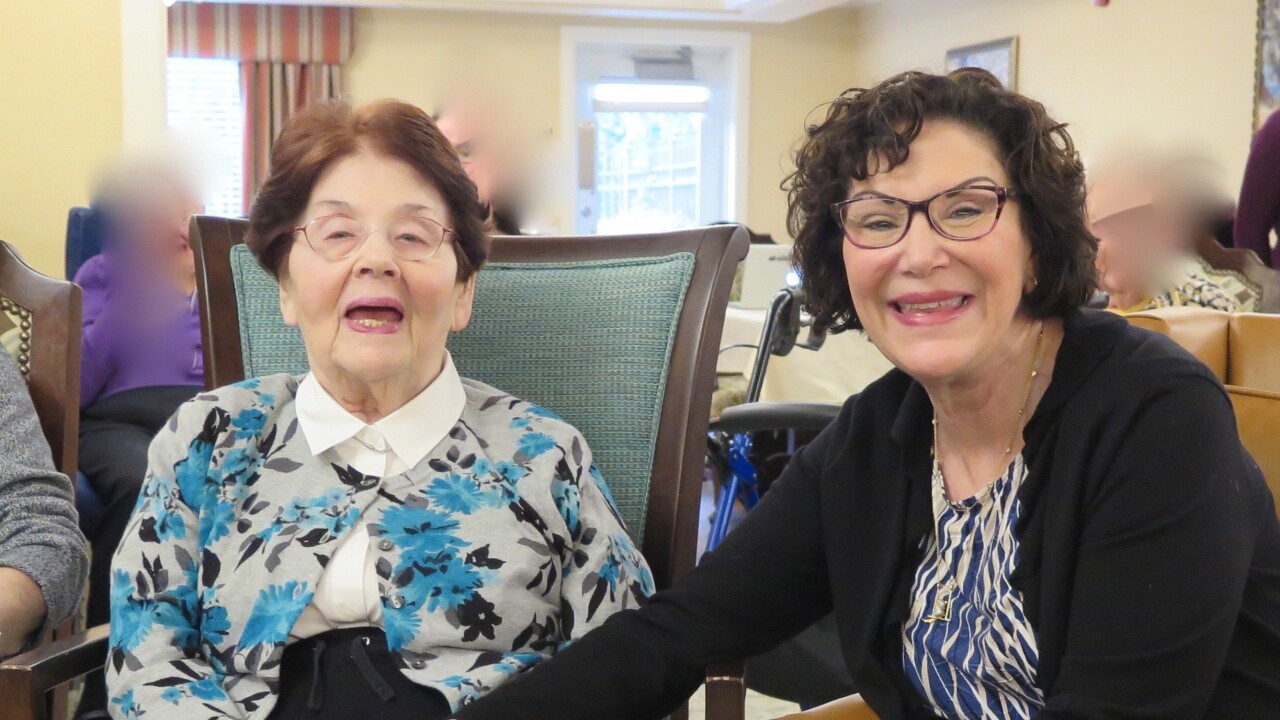 CINCINNATI — Ninety-four-year-old Frieda Garber has days where her mind can be foggy.

But even on bad days, she's crystal clear when she takes part in a program called Songs By Heart at The Kenwood by Senior Star.

As soon as pianist Lynne Miller and vocalist Clare Hingsbergen begin to perform, Garber’s eyes light up and she starts to sing along, said her daughter, Ellen Garber.

“Just to interact with my mom and have a connection, sometimes I almost want to cry,” Ellen Garber said. “She claps her hands. She taps her toes. You just watch her transform.”

Started in Chicago about four years ago, Songs By Heart is specifically designed to make connections with people experiencing memory loss.

The nonprofit Songs by Heart Foundation has a music therapist on staff who trains the program’s singers in the importance of making eye contact and physical contact with all the program’s participants by holding their hands or touching their shoulders, Becker said.

The Kenwood is the only retirement community in the region to offer the program, Becker said.

Health services programs and events manager Annette DeCamp said The Kenwood’s staff was sold on Songs By Heart after seeing a demonstration in 2015. The retirement community has been offering Songs By Heart to residents, particularly those who live in its memory-care units, for about a year, she said.

“It engages our residents. It wakes them up,” she said. “The reaction carries over. They are engaged. They’re happy, and they’re laughing and they’re singing.”

Frieda Garber has been living at The Kenwood’s independent living community for about five years, Ellen Garber said.

She used to go to musicals with her husband and is familiar with all the songs that Miller and Hingsbergen perform. Her favorite is “Zip-a-Dee-Doo-Dah,” and both performers remember that from week to week.

“When Clare holds my mom’s hands, it brightens her up, and she just lights up,” Ellen Garber said. “It’s just my mom from years ago. It’s very special.”

Jill O’Shea’s father lives in one of The Kenwood’s memory care units and also enjoys Songs By Heart.

“To watch them just remember and glow, they hold their hand, they look them directly in the eye, they swing their hands. They’re clapping in their seats,” O’Shea said. “It’s just a remarkable experience.”

Her 91-year-old father also has a terrific voice and sings along at the top of his lungs, she said.

“His favorite thing to do is correct grammar,” O’Shea said. “He sings, ‘Isn’t she sweet’ instead of ‘Ain’t she sweet.’”

Hingsbergen knows the names of everyone who attends Songs By Hearts each Thursday afternoon and which songs reach them best.

One woman, who died recently, would start out grumpy each week but would brighten at the song “Meet Me in St. Louis” because she was from St. Louis originally, Hingsbergen said.

Hingsbergen is a professionally trained singer and had to audition for her job as a Songs By Heart vocalist. She majored in communications at Northern Kentucky University and earned a minor in musical theater. She also has a master’s in communication and is passionate about finding ways to help people connect, she said.

“Sometimes they won’t remember their kids’ names, but as soon as we start singing, they know it,” she said. “It’s about really connecting with people and getting them to make that contact and light up.”

Songs By Hearts is currently in nearly 50 retirement communities in eight metropolitan areas across the country, including Chicago, Washington, D.C., Naples, Florida and Houston, Texas.

Becker worked to bring the program to The Kenwood because her grandmother, Bibs Becker, lives there in an independent living apartment.

“I just wanted her to experience it,” Becker said. “She needs it. She’s a musician. To have music in her life every week is important.”

It’s important for all the residents who participate, DeCamp said.

“It’s the connection. It’s the empowerment,” she said. “It’s being able to empower these residents who suffer from memory loss to be able to vocalize.”

After every Songs By Heart Session, Hingsbergen logs which songs meant the most to which people and whether anyone had more of a communication breakthrough than the week before.

“We’re really trying to work with them and see improvement,” she said.

When Frieda Garber first started attending the program, she would “kind of sing,” Hingsbergen said. Now, Garber sings loudly to each song and locks eyes with Hingsbergen every time.

“Frieda is probably one of the best — if not the best — example of someone I’ve seen show just great improvement every week,” Hingsbergen said. “It really brings out a lot of life in Frieda.”

Ellen Garber said she sees that, too.

She joins her mom at Songs By Heart whenever she can.

“These are seniors that have memory issues, and to watch them sing along and just have 45 minutes of fun, it’s great,” she said. “I enjoy the program as much as my mom.”

More information about Songs By Heart is available online.

Families that would like to see Songs By Heart in action can contact The Kenwood by Senior Star.