'We just love hearing the noise. It means progress.' 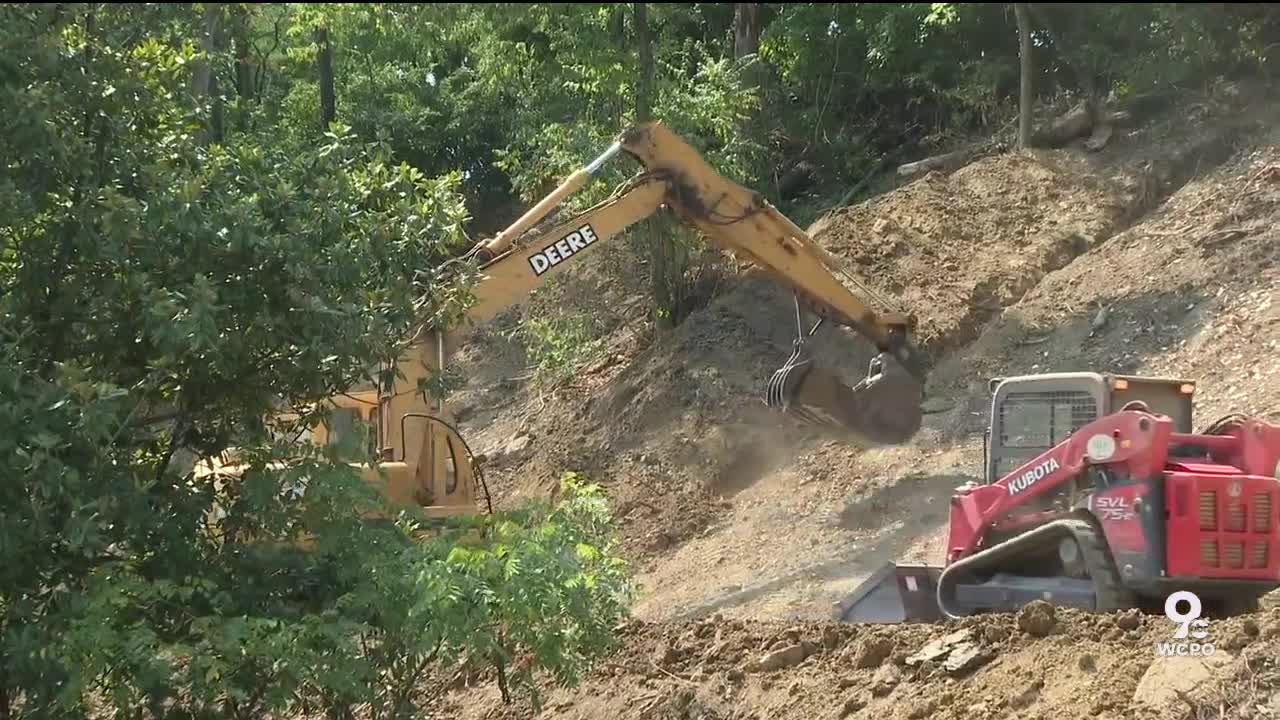 After more than a year of sustaining property damage, petitioning, research and fundraising efforts, a group of families have started a construction project to stop a landslide that has been wreaking havoc on their homes at Wess Park Drive in North Avondale. 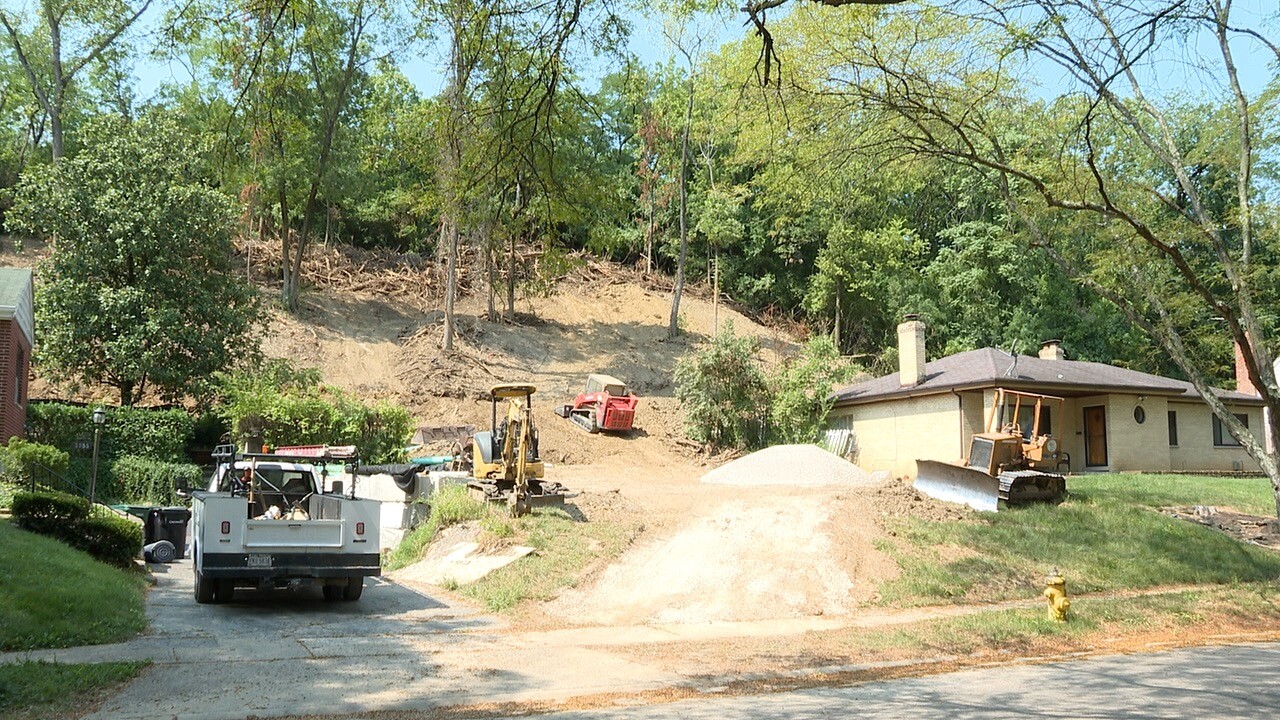 CINCINNATI — After more than a year of sustaining property damage, petitioning, research and fundraising efforts, a group of families have started a construction project to stop a landslide that has been wreaking havoc on their homes at Wess Park Drive in North Avondale.

Workers have been at the site for about a week. It is expected they will finish the project to halt the landslide within the next one to two weeks.

“[N]ow we have a Tonka truck rally down the street,” said Richard McKenzie, one of the affected homeowners who has been organizing the project. “We just love hearing the noise. We love hearing the diesel engines and it means progress. It means we're getting fixed, it means that there is a light at the end of the tunnel...”

The issue first arose last April. Earth from the hill standing up against a number of homes’ backyards on Wess Park Drive started slipping. One house’s foundation was so badly damaged from the impact of the landslide that it was condemned by the city and demolished a month later. The city of Cincinnati cited the incident for code violations and originally gave the residents 30 days to address the issue, declaring the landslide was occurring on private property.

However, the residents were struggling to resolve the issue in part because options to make repairs were highly expensive. One original plan to drive pillars into the bedrock as a way of securing the land would have cost almost $330,000. Without financial support from the city, residents could not afford to pay for the robust plan on their own. Furthermore, they grew frustrated that the city was paying more attention to landslides in other areas, like those on Columbia Parkway.

The city would go on to give the residents further extensions to resolve the issue and they settled on a second, less costly, plan at approximately $100,000. This entailed putting drains beneath the hill to extract water from the dirt, thereby preventing the land from continuing to shift. Residents say they managed to raise approximately $60,000 with donations from friends and family, as well as support from some of the residents’ churches, the People’s Church in Corryville and the Corinthian Baptist Church in Bond Hill.

“One of the really good things that has come out of this is that it's brought us all closer together as neighbors,” said Deanna Lane, one of the affected residents. “We've been all working together to try to raise the money to take care of the problem.”

Costs of the project are divided among the four families that have been impacted by the landslide. The fifth family that lost its home in the demolition has not had to financially contribute but is still part of the team holding the construction project.

Deanna Lane’s husband, Timothy, has been living in their affected home since he was a child. The two moved back into the home when they married to take care of his mother. He was unaware that the landslide would be an issue at the time they moved in. He said the families still have a ways to go to finish funding the construction project.

“We're looking into whatever avenue we can to make sure that the work is completed and paid for," Timothy said.

In addition to the house that had to be demolished for damage to its foundation from the landslide, McKenzie said that his home gradually sustained damage. He said he will need to reconstruct a new driveway, parts of his sidewalk and his back patio.

Deanna Lane points out how the stone wall in her backyard is now bulging and cracked. There is also a hump in the grass that was not there before.

“Until this is fixed and our citations are lifted from the city, our houses are worth nothing,” McKenzie said.

“Even after it's fixed, I'm not sure if the the value will go back up because there's still a hill behind our land,” said Deanna Lane. “[W]e couldn't sell our homes right now even if we wanted to.”

The homeowners describe their efforts to stop the landslide as an arduous process. There were few experts they could consult with who were experienced in stopping landslides. Their plans were also occasionally derailed by frequent rainfall. Still, McKenzie said, the homeowners are satisfied with the plan they have settled on.

“Does it take on a little bit of risk? Yes, it does,” said McKenzie. “There's no perfect solution that fits all. But after doing all due diligence, interviewing numerous people, talking about and testing our hypotheses with other people in the field, we settled on this solution. And we're so far very happy with what's going on.”

Eric Russo is the executive director of Hilliside Trust, a nonprofit that advocates for thoughtful use and conservation of hillsides. He said that while the residents had to opt for the less costly solution, it is still equally if not more effective than their initial idea to install pillars into the bedrock.

“Yes, if they could have done a retaining wall and a drainage solution, that would have been optimum,” Russo said. “But to do it this way, I think this is the first and most important thing they'd have to do, is get the water off the hill and divert it away from hill.”

The homeowners say the landslide is a rotational one, meaning it was caused by a number of hillsides that were happening underground. Timothy Lane said a geotechnician also explained that it was possible the landslide was partly triggered by weight and water that were being held with material at the top of the hill.

Residents credit city officials including Vice Mayor Christopher Smitherman, as well as Cincinnati City Councilmembers Jeff Pastor and David Mann, with expressing concern for their situation through meeting with them and offering advice on how to resolve the problem. But Deanna Lane said the only significant help the city has provided has been through delaying sanctions the residents could have received for not fixing the hillslide fast enough.

“I'm just pleading that the city will chip in something to help us finish this project,” Deanna Lane said. “Even 10% of our costs, 20% of our costs would be such a help. We have just been emotionally drained from the stress of all of this. We've done our part in doing what we can to raise the funds that we have raised so far and getting this work going, but we're still going to have a balance that we have to pay for.”

“We need our city council to do something to help people that have natural disasters befall them,” said Timothy Lane. “[W]e tried to do the best that we could, but we still fell short because we didn't have the help of our city behind us.”

However, Russo notes the city has limitations in being able to support the homeowners in this.

“This is pretty much more of a situation of buyer beware. The city has a lot of expenses right now with their own public infrastructure, which we're seeing right now with Columbia Parkway, for example. And so they don't have the funds to be able to fix these kind of problems,” Russo said.

“At the same time, I am heartened by the fact that they’ve been willing to work with the neighbors to not make them put a retaining wall in but instead do a drain solution, which is far cheaper.”

Vice Mayor Smitherman did not respond in time for the publishing of this article to comment.

Russo notes that this is one of the larger landslides that he has seen in Cincinnati, and that it is also unusual because it has affected a number of homes. He said that while landslides are a prevalent issue in the city, “they’re one of Cincinnati’s better kept secrets.” Russo described local landslides as a silent, insidious force, because they often do not become apparent until a retaining wall has to be taken down or a home is affected.

“We don't have the kind of landslides of that we experience perhaps like in California or Washington State, which are more dramatic and actually can kill folks,” Russo said. “They tend to take longer times to manifest but can cause an equal amount of property destruction over time, which can be very devastating from a financial standpoint.”

After finishing construction, McKenzie said the homeowners will make it a grassy hill and plant new trees on top. He looks forward to holding a barbecue in the vacant lot where his neighbors’ demolished house once stood for the people who made the project to stop the landslide successful. While the plot of land is still privately owned, he does not know whether a new house will be rebuilt there.

Timothy Lane said homeowners should be watchful of their property and surroundings.

“No one can predict how the land will move.”

If homeowners see something out of the ordinary, Lane advises “that you get in contact with the city and let them know what's going on.”

Russo also recommends homeowners consult with experts like an engineer who specializes in structures, geotechnology or geology to inspect their homes and advise whether they may have long-term repercussions with landslides or slope failures.

“If they like the kitchen or the cabinetry and the view, that’s great,” Russo said. “But they’ve got to make sure that the bones of the house are going to stay in place.”

Andria Carter is a reporter with the Cincinnati Herald. WCPO 9 and the Herald worked together to produce this story. The two news organizations are deeply committed to covering what is happening in our African-American community.