Loveland City Schools' year of hope: These students spent a year helping others through tough times

'We want our students to take care of each other' 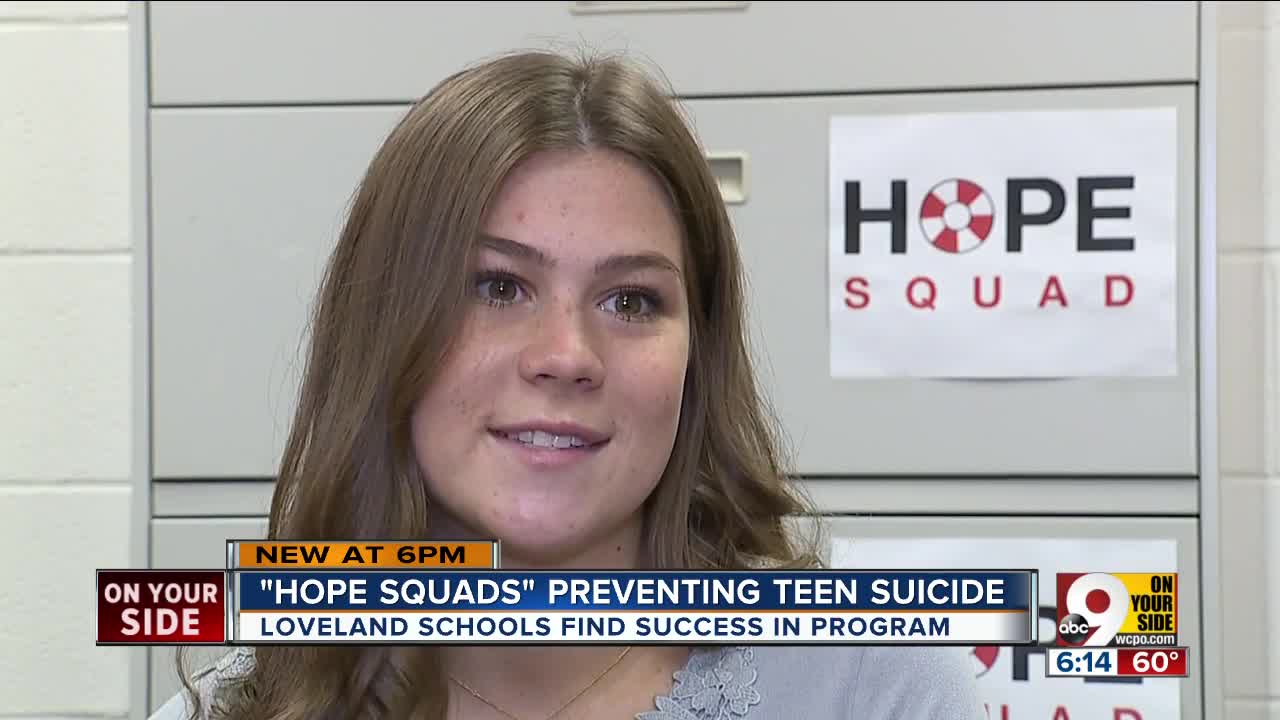 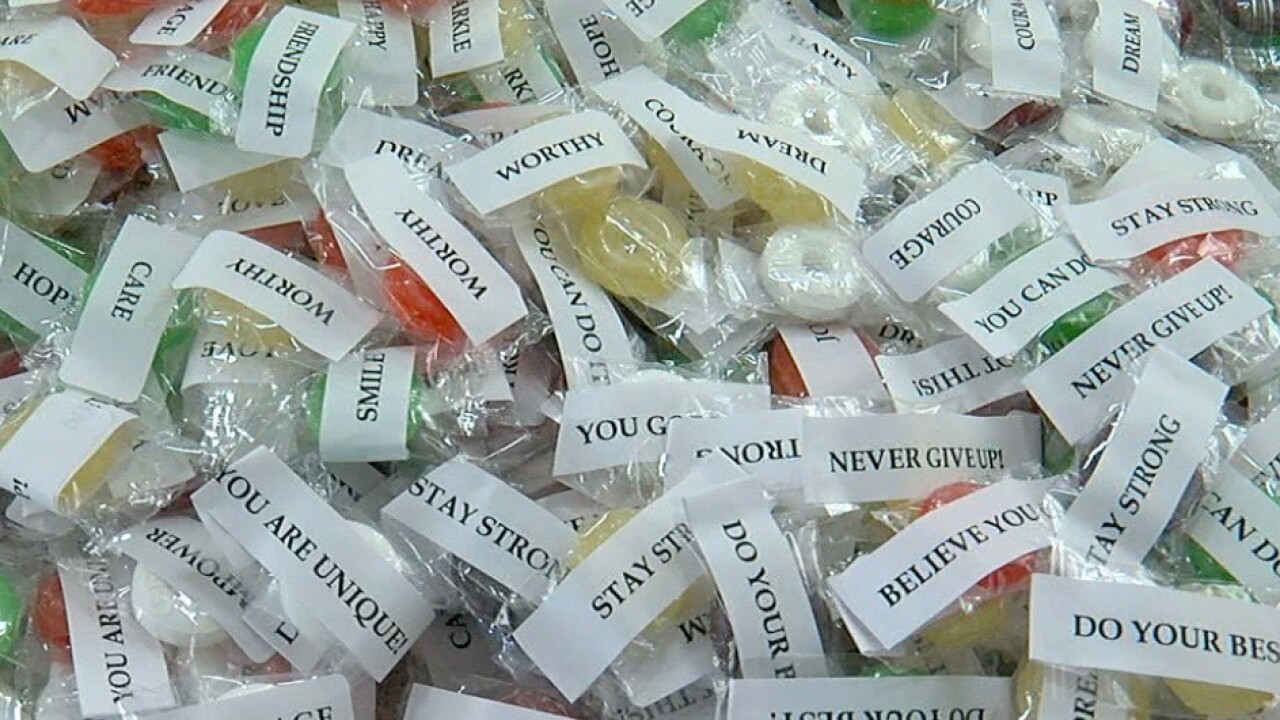 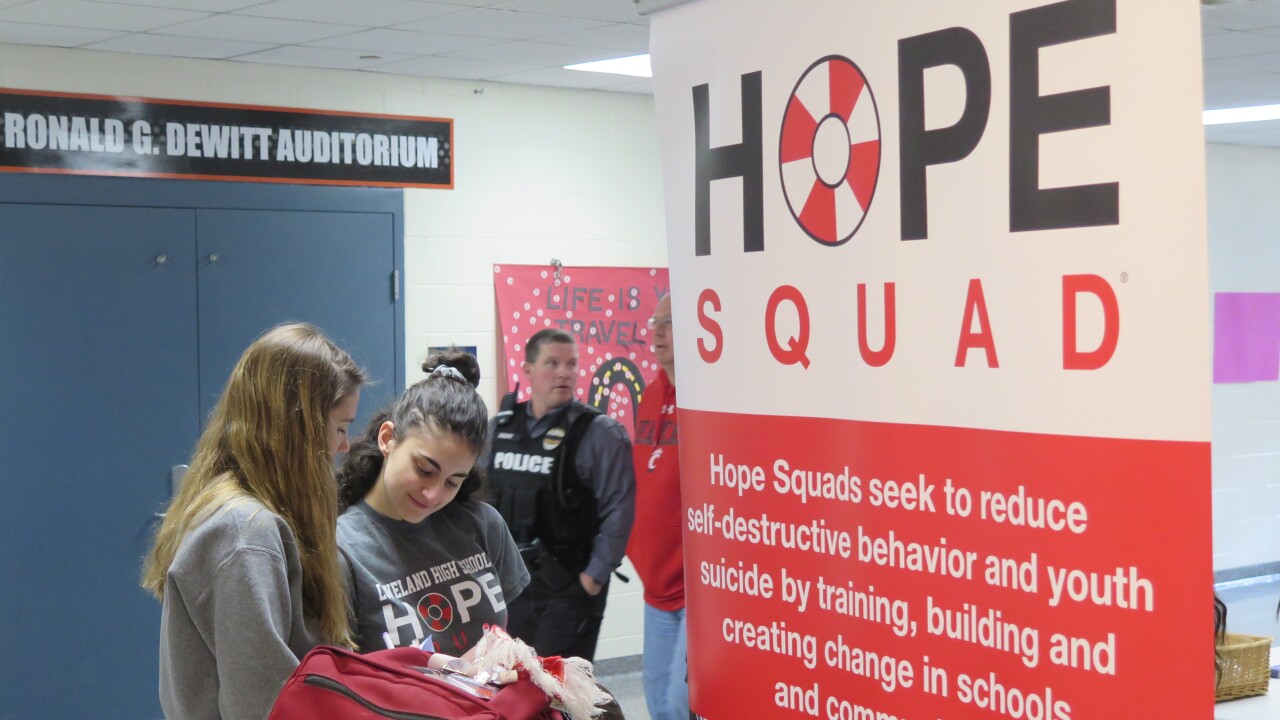 LOVELAND, Ohio — Paxton Merz is only 11 years old, but the Loveland Intermediate School student spent much of his fifth-grade year keeping an eye out for friends and classmates in distress.

You would be surprised at the kinds of problems kids his age have, he said.

“It’s not just kids just, like, calling names,” Paxton said. “It’s a lot of stuff. Like constant bullying, maybe some things going on at home. Something that’s stressing them out so much that they just can’t take it anymore.”

Can’t take it anymore — as in children so upset and dejected that they think about hurting themselves.

Started in Utah, Hope Squads use the power of friendship to prevent suicides and improve school culture. The program trains trusted students to become peer counselors who know how to be there for friends in need and direct kids who are struggling to adults who can help them.

“Loveland really has done a tremendous job of making this a focal point for their entire school district,” said Keith Kline, executive director of Grant Us Hope, the local nonprofit that brought Hope Squads to Ohio. “I just can’t say enough about Loveland and their commitment to making sure that all the students in the Loveland school district grow up safe and healthy.”

WCPO interviewed Paxton and Loveland High School students Caroline Geist and Marie Plitt twice about what it was like to be members of their schools’ Hope Squads — first when they were just getting started and again at the end of the school year.

The experience wasn’t easy, they said, but all three agreed they would do it again.

‘What gives you hope?’

Paxton said in February that he jumped at the chance to be part of the Junior Hope Squad.

“I like helping people. It makes me feel good,” he said. “I was super excited.”

WCPO was there for the intermediate school’s first ever Hope Day.

The Junior Hope Squad decorated a banner to display during lunch, passed out notes with lifesavers and invited classmates to participate in fun activities on the lunchroom stage.

Paxton said that his goal was to “make people feel like they deserve to be here, that they’re not alone and that people are here to help them.”

He expected the most difficult part would be “hearing a bunch of sad things” but added that Hope Squad members were being taught how to take care of themselves, too.

They asked classmates to use sticky notes to answer the question “What gives you hope?”

Responses ranged from “friends and family” to “a kind word” to “my dogs.”

Students are the ones who nominate classmates to become part of the group by writing down names of peers they feel they can talk to and trust.

Caroline and Marie said they felt honored to be nominated by their classmates and excited to be part of the squad.

“My biggest hope is that everyone has somebody and they can talk to someone and they can get through it and work it out,” said Marie, who is now 18. She graduated from Loveland and will attend Ball State University in the fall.

“I think in college it will help a lot, too, in case, like, you feel alone and you need someone to talk to,” she added. “I think even personally it will help me know I can go talk to someone and work it out.”

Caroline, who is also 18, said in February she was still wrapping her head around the idea that some of her classmates might not be as OK as they appeared.

“A lot of my friends, I feel like are always so happy, and it’s just really crazy to see that maybe they aren’t,” she said. “When they reach out to you to talk, it is a little intimidating because you don’t want to say the wrong thing.”

Still, Caroline was eager to do her part.

“It’s really cool to know that everyone goes through different things and I can be someone to help that,” she said.

Loveland High’s Hope Squad decided miniature therapy horses would be a fun way to reduce stress at the school in April during its Hope Week.

WCPO was there to touch base with Caroline and Marie and see how the students responded.

“This week is all just about bringing a good atmosphere and a lot of hope to the school,” said Caroline, who graduated from Loveland and will attend Miami University in the fall.

The little horses were a big hit, and Marie said Hope Squad in general had been going well.

Even as some students crowded around the therapy horses to snap photos, others went to a nearby table to sign a banner for Kings High School.

A student there had died days earlier, and Loveland’s Hope Squad wanted to extend its love and support to the students at Kings.

The death at Kings and student suicides at other schools earlier in the school year underscored for Caroline and Marie just how important programs like Hope Squad can be, they said.

“It’s very heart-breaking to hear all the stories and the suicides that have been happening,” Marie added. “But I think spreading the love within different schools helps them know that they’re not alone and that communities help within each other.”

By the end of the school year, Marie, Caroline and Paxton all had put their Hope Squad training to use.

“I had a few where it was just, like, a bad situation, and honestly Hope Squad really did help because a lot of things we learned in our trainings, I was able to use to persuade the other person and help them,” Caroline said. “Letting them know they’re not alone.”

Knowing that other local schools did was sobering for all the students involved in Hope Squad, Caroline said.

“You just always have to be thinking you don’t know what battles people are fighting,” she said. “I have a friend, and it was over Christmas break. She was really going through a lot and didn’t really tell me about it until I reached out to her. She actually overdosed on medicine.”

Caroline reached out to her friend because of some alarming social media posts.

“One of the scariest parts was, she was like, ‘You can’t tell anyone,’” Caroline said. “I wanted her to be able to trust me, but I had to get her the help that she needed.”

Caroline leaned on her Hope Squad training and went to her mom for help reaching the friend’s parents.

Seeing friends in crisis also was the toughest part of Hope Squad for Marie, she said.

So many times, Marie said she just wanted to say to people: “I wish that you could be in my shoes right now because I know that, like, your shoes are probably so hard to walk in, and I just want to lift you up.”

Paxton said he went to a trusted adult three or four times during the school year because he was concerned about friends and classmates.

“One person, their friend was going to move away, and they were just really down about that because that was their best friend, and they really needed help to get through that,” he said.

Another time, he was shocked that someone he knew well was struggling badly. He talked to her for a while before going to his parents and then talking with a guidance counselor at Loveland Intermediate.

His friend was a student at a different school, but the Loveland counselor was able to reach out to the girl’s school to help connect her with the support she needed.

“That person is doing a lot better now,” he said.

‘The stress has always been there’

One thing the Loveland Hope Squads couldn’t do was to completely change the school culture in a single year.

Paxton said the Junior Hope Squad was sometimes the butt of jokes at Loveland Intermediate.

“People don’t take it as seriously as they should, and they joke about when someone roasted them, and they say, ‘Oh, I need Hope Squad!’” he said. “That is kind of obnoxious, but, you know, kids are going to do that because they’re kids.”

Caroline and Marie said they encountered the same attitudes at the high school.

“The students as a whole throughout the year were kind of confused by Hope Squad. People started to make fun of it and kind of take it as a joke,” Caroline said. “But because of the impact we made, it did kind of change the culture of the school.”

Grant Us Hope, the nonprofit that brought Hope Squads to Ohio, brought Hope Squad members from many different schools together at a conference earlier this year. Talking with students from other schools there was a big help to Marie, she said.

“I understood that all the schools kind of have negative comments,” she said. “I feel like some still, like, didn’t really get it, but I feel like that happens at anything you do.”

Loveland High School Principal Peggy Johnson said it would take more than a single school year for all the district’s students to truly understand Hope Squads, but she’s confident kids are beginning to buy into the program. Administrators got much more information about potential problems last school year than ever before.

“The stress has always been there,” she said. “Now we actually have a way, a system where they (students) can be part of the solution.”

In the four years Johnson has been at Loveland High, the number of students being hospitalized for depression, suicide attempts and thoughts of self-harm has risen dramatically.

“It’s hard to fathom,” she said. “We come to work sometimes wondering if a student will show today, to be honest.”

A dramatic change in school culture will take time, she said.

And although Caroline and Marie are heading off to college, Paxton said he’s committed to Hope Squad for the long haul.

“It’s just a part of my everyday life now, and I like that,” he said. “I think it’s really interesting how a bunch of kids can help change a lot of people.”

Schools across Greater Cincinnati are counting on them, Johnson said.

“We want our students to take care of each other."

More information about Hope Squads in Greater Cincinnati can be found online through Grant Us Hope.