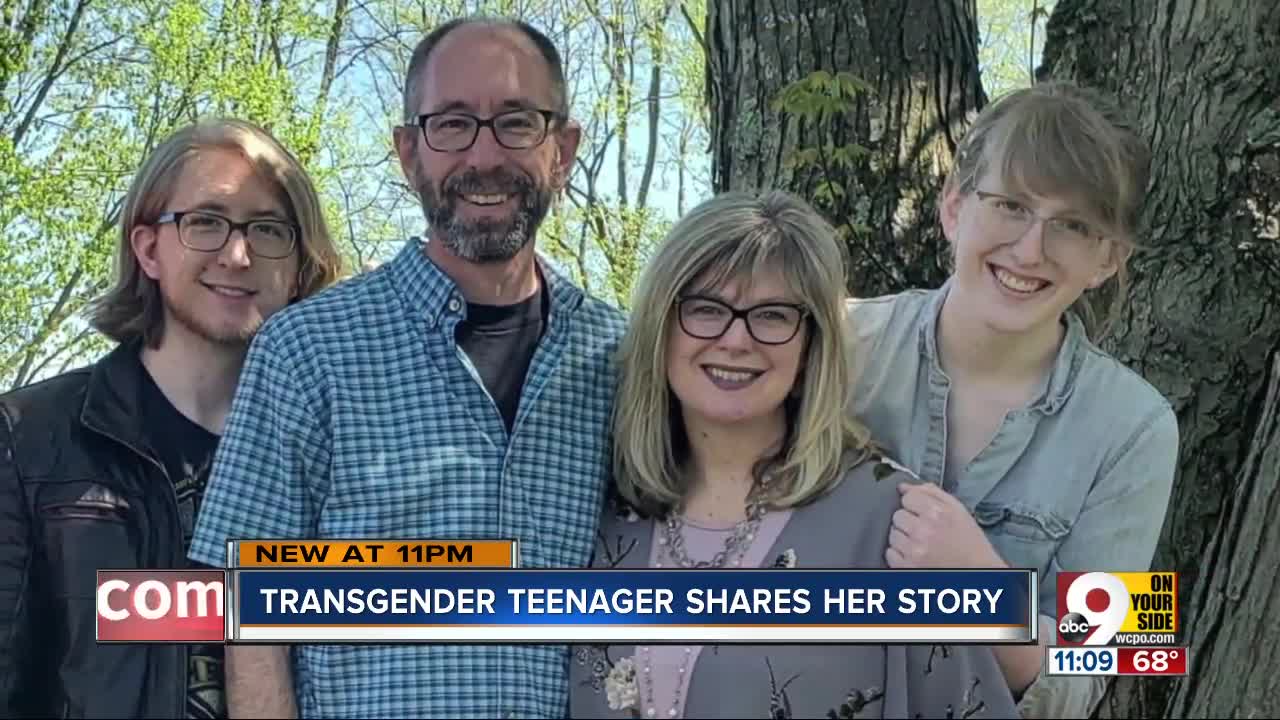 At 15, Allison Kurtz thought she would kill herself before the age of 20. Children's Hospital and its Transgender Health Clinic helped her loved ones see her for the first time.

LIBERTY TOWNSHIP, Ohio — Allison Kurtz was 15 when she saved her own life. Cincinnati Children’s Hospital and its innovative Transgender Health Clinic helped her do it.

People called her by a different name then, and her one attempt to tell her parents who she really was — via a printed-out packet of information about transgender identity she had slipped under their bedroom door when she was 13 — ended in disaster. They asked questions. She panicked.

“I just denied it outright,” Kurtz, now 18 and on her way to the University of Dayton, laughed Wednesday. “I just, ‘No, no, I got it out of my system. I’m fine. Can we stop doing this now?’”

Her mother, Kelli Kurtz, remembers the fear in the eyes of the daughter she once believed was a son. She remembers her own terror, too.

“It was obvious from a very early age that she struggled,” Kelli Kurtz said of Allison. “She struggled with being comfortable in her own skin, even though we didn’t know what that was about at first. … We had no knowledge of what it meant to be transgender.”

Allison decided to keep it a secret after that, but it was the kind of secret that hurt more the tighter she held it. Living in a body that didn’t fit and being called a name she didn’t want felt like being a cassette jammed into a CD player, she said.

“I was a ghost,” she said, except for the moments she would sit in the boys’ bathroom and contemplate hanging herself from the bar above the stall.

Video games and sleep became her only escape from a life that felt made for someone else.

“And then I decided, okay, so if I continue on that route, I will die,” she said. “And that's a given fact, that's not a postulation. That's not a guess. It's that I know, based on how badly I've been doing, if I continue like this, I will not survive to see, like, 20.”

She talked to her parents again that spring.

Again, they didn’t understand, but they knew they wanted to help her. They had seen the withdrawal of the last year, the oversleeping, the way she pushed away her friends.

“Hearing her talk (now) about those dark days and what thoughts went through her head, how she had thoughts of ending her life, it takes the wind out of me,” her mother said.

The family went together to the Children’s Hospital Transgender Health Clinic, where experts explained to Kurtz’s parents what she hadn’t been able to articulate herself.

“Without Children’s, I would not have been able to do it,” she said. “Obviously, they provide medical support with hormones and stuff, but a less talked-about thing is that they provide emotional support in that they know how to explain to people who don’t understand. They were able to talk to my parents and talk to them in a way that they got it.”

The clinic develops a unique treatment plan for each of its patients. Its staff includes a chaplain, an endocrinologist, a social worker, a nurse practitioner specializing in transition medicine and a gynecologist specializing in pediatrics, all of whom work together to help transgender youth live physically, mentally and socially healthy lives. Over 1,400 patients use the clinic, according to Children's, with more waiting to get in.

For Allison Kurtz, the plan included talk therapy with her entire family, including her parents and two brothers, and eventually hormone treatment to help her make a physical and social transition.

“It was difficult at first because it was such a big change, but eventually I kind of blossomed into a new person that I wasn't before,” she said. “And I like going out now. I like talking to people. I like doing things.

“Everything in life was an effort” before, she added. “Now everything in life is like a gift, and I’m having fun every day discovering who I am more and more because I’m kind of late to the game on that.”

Kurtz’s story is unique but not unusual. A study published by the American Academy of Pediatrics found in 2018 that transgender adolescents on average attempt suicide at more than twice the rate of cisgender peers who identify with the gender they were assigned at birth. The Canada-based Centre for Suicide Prevention found up to 43% of transgender people reported having attempted suicide in their lifetime.

Kurtz said she knows — not thinks, knows — her life would have ended early without Children’s Hospital and the acceptance of her family.

“I was once not a normal kid, and then I was,” she said. “And I was just like any other high schooler, and I was living and I was taking classes, and I was me.”

Parents do go through a grieving process for the child they thought they had, Kelli Kurtz acknowledged. Adjusting their expectations for that child’s life can be difficult.

“But I just look at her now and see how happy she is and know that, had she not been able to live her truth and be who she was always meant to be, she wouldn't be here,” she said through tears. “And that reality, it makes up for all the hard times.”

To other parents, she said: “All you have to do is watch these kids when they transition and they truly become who they are and start living their truth, and it's like you see your kids for the first time. I can't even describe what it's like to watch her now. It's comforting. We have so much pride for what she's doing.”

Allison Kurtz wants to give back to Children’s, which gave her the chance to live her life honestly. She’ll be celebrating LGBTQ Pride Month June 22-23 with fundraiser through Extra Life, a Children’s Miracle Network program in which gamers spend 24 hours streaming for a charitable cause. Anyone wishing to donate to Team Allison can do so here.

She also wants her story to encourage other transgender teenagers who might feel trapped in the dark place she inhabited between 13 and 15. Talking publicly about it is hard, but she’s battled worse than stage fright.