How a white Cincinnati Freedom Rider helped, learned from black civil rights activists in the '60s

'I was frightened for my life when I was there' 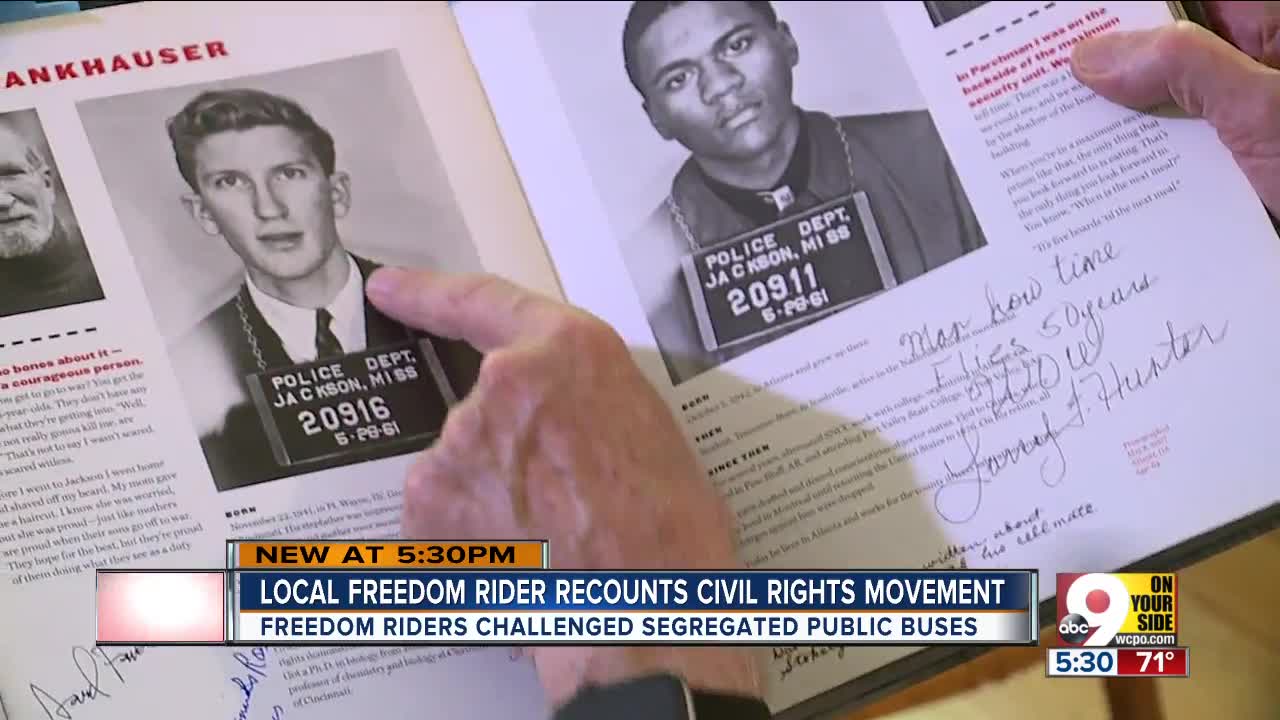 David Fankhauser was in danger from almost the moment his plane landed in Montgomery, Alabama, on May 24, 1961. He was there as a Freedom Rider, one of hundreds of civil rights activists who rode integrated buses in the segregated south. Their mission was to challenge the refusal of southern states to enforce U.S. Supreme Court rulings that had declared segregated public buses unconstitutional.

CINCINNATI — David Fankhauser was in danger from almost the moment his plane landed in Montgomery, Alabama, on May 24, 1961.

He was there as a Freedom Rider, one of hundreds of civil rights activists who rode integrated buses in the segregated south. Their mission was to challenge the refusal of southern states to enforce U.S. Supreme Court rulings that had declared segregated public buses unconstitutional.

Just 10 days earlier, a mob of armed Ku Klux Klansmen attacked Freedom Riders in Alabama, firebombing their bus and beating at least one man with a baseball bat.

“About a week later, Diane Nash of the Student Nonviolent Coordinating Committee was calling around looking for volunteers to replace the injured riders,” said Fankhauser, who was a 19-year-old sophomore at Central State University in Wilberforce, Ohio, at the time. “There were funds to fly us down as soon as possible to Montgomery. So I said yes, just like that, and the next day we were flying down to Montgomery.”

Fankhauser had to be sneaked into the home of civil rights icon Ralph Abernathy because it was against the law for him, a white man, to stay in a black family’s home.

“As we came in from the airport — again, it’s 8 o’clock in the morning — and who’s sitting on the couch in his pajamas? Martin Luther King Jr.,” Fankhauser said. “We knew who he was, but his prominence was nothing like it is today.”

Fankhauser will discuss his experiences as a Freedom Rider during a presentation at 7:30 p.m. May 20 at Anderson Hills United Methodist Church.

“I was frightened, and I was frightened for my life when I was there,” he told WCPO during a recent interview at his Clermont County home. “But the people who have real courage were the young, black people from the south who took part in the Freedom Rides because they had to go back home. And everybody knew what they had done.”

The power of the ‘rainbow’

Now 77 and retired after a 43-year career as a biology and chemistry professor at the University of Cincinnati’s Clermont College, Fankhauser said he doesn’t think “bravery” is the right word to describe his actions all those years ago.

But local scholars of the civil rights movement used the word “courage” more than once when describing the Freedom Riders and their actions.

“They faced domestic terrorism and exemplified tremendous courage,” said Adam Clark, an associate professor of theology at Xavier University who just finished teaching a course on the Rev. Martin Luther King Jr. “It was one of the earliest intentional, integrated aspects of the civil rights movement where you had younger white people join older black folks who had been fighting for civil rights for decades.”

Photos and televised coverage of those white activists being beaten had a big impact on the nation, Clark said.

“You had disappearances and lynching of black bodies frequently in the south, and it never made national news,” he said. “But when white bodies are damaged and bruised, it makes national news. Even people who agreed with segregation at the time, when they saw the extent that people would go to keep this, it made them reflect on the law again.”

It is important to remember that people of all races and genders were involved in the civil rights movement, said Rodney Coates, a professor of sociology at Miami University and coordinator of the university’s Black World Studies program.

“The fact that you had this ‘rainbow coalition’ that showed up and showed out for this cause helped show us it wasn’t a black issue," Coates said. "It was a human issue."

“Let’s be real about it,” he added. “If it hadn’t been for them and their courage and their sacrifices, who knows how many more years Black Codes, all-white primaries, blacks not being able to vote — all these things — how long we would still have had to live with this.”

Fankhauser stayed hidden away in Abernathy’s house for four days.

He was among six young activists who began their Freedom Ride on May 28, 1961. They had decided in advance that when they got arrested, which was inevitable, they would refuse to post bail in an effort to try to fill up the local jail.

They traveled from Montgomery to Jackson, Mississippi, with no stops in between before walking into a white waiting room and sitting down together, black and white Freedom Riders alike.

A local police captain ordered the group to move along several times and had them arrested when they refused.

Fankhauser and David Myers, another student from Central State, were the first white Freedom Riders to be arrested and refuse bail, Fankhauser said.

“Maybe 10 days later, we had filled up all the jail cells in the city of Jackson, and they put us on a bus to Parchman state penitentiary,” he said.

The Freedom Riders were isolated from the rest of the prison population so they wouldn’t agitate the mostly black inmates, Fankhauser said, and were held on death row in the maximum-security unit.

The cells weren’t integrated, he said, but all the Freedom Riders were in the same block.

But the singing bothered the men running the prison, Fankhauser said, and they punished the Freedom Riders for it.

Before long, the cellblock was filled with mosquitoes and other insects, he said. That’s when, in the middle of one night, guards walked in to say they had to take care of the bugs and sprayed commercial-grade insecticides all over the cell block and the activists, he said.

“We’re dripping with this stinging DDT,” he said. “Lord knows what was going to happen after that.”

Fortunately, several of the Freedom Riders were from Minnesota, and the Minnesota governor sent a delegation to the prison to check on how they were being treated, Fankhauser said.

The next morning, the warden visited the cellblock, he said, and told the Freedom Riders they had "gotten off on the wrong foot" and that they simply needed to tone down their singing.

“He didn’t want the obvious mistreatment so obvious,” he said.

Soon after, some men from Minnesota wearing fancy suits came to inspect the conditions, which improved after that, Fankhauser said. The organizations helping to coordinate the Freedom Rides secured the activists’ release after 42 days of incarceration.

A bus took the Freedom Riders from Parchman back to Jackson. Fankhauser took a train from there back home to Cincinnati.

That was all nearly 60 years ago at this point, and Fankhauser has a hard time pin-pointing exactly how the experience shaped him.

But he, Clark and Coates all agreed the Freedom Rides of the civil rights movement offer important lessons for today.

“The message that comes clear is we are stronger together than we are all separated,” Coates said. “We can all learn from that because it seems like, in some cases, we’re even more polarized today.”

The key lesson for Clark, he said, is that people can be the “third rail” of politics, that source of electricity and motion that keeps society moving forward.

“I think that might be our only hope when we look at kind of the quagmire that’s happening in D.C.,” Clark said. “We have to seize that kind of initiative back and become a much more informed, passionate and compassionate citizenry to make the kind of change we want to live in.”

For Fankhauser, it all comes back to words spoken by King, that towering figure that he first met at Abernathy’s home.

“Darkness cannot put out darkness. Only light can put out darkness. Hate cannot put out hate. Only love can put out,” Fankhauser said, pausing to collect himself before he continued. “I think that lesson is one that we desperately need today. When the coin of the realm seems to be hate and anger, that will not lead to a peaceful society, to harmony. So I would like to see us learn from that.”

More information about Fankhauser’s May 20 presentation, including how to RSVP for the free event, is available online.