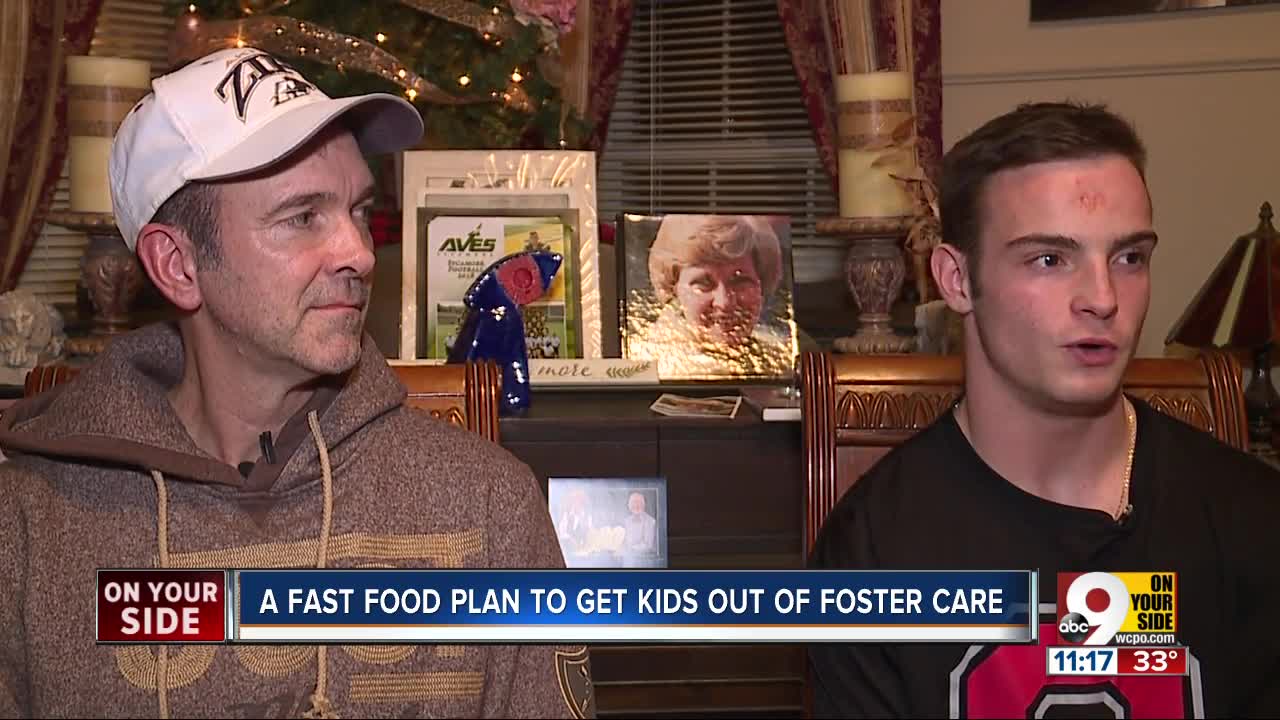 Wendy's fast-food founder Dave Thomas was adopted and never forgot the support of a loving family. President George H. W. Bush asked him to lead a national adoption awareness campaign in 1990 – and the idea for the Dave Thomas Foundation was born. Like the restaurant chain, it started in Ohio.

At the end of 2019, more than three thousand children and teens were awaiting adoption across Ohio.

In Hamilton County, that number has doubled over five years. More than 400 kids awaited adoption at the start of the new year.

More and more of them are teenagers. Teens like Michael Cipollone, originally from the Felicity area, who find little interest in being adopted compared to newborns or young children.

“There is potential to find homes for older kids and they’re not alone,” Cipollone said, sitting with his adoptive dad in December. “There's always someone there for them."

Cipollone was adopted by Ted Snyder, a Mason optometrist, a couple of years ago. Snyder wanted an older child -- more self-sufficient -- because of his busy schedule.

“There’s just thousands and thousands [of teens] in the foster care system that need homes,” Snyder said. “I just got the best one."

Cipollone, a senior at Sycamore High School, is one of 1055 kids adopted in Ohio with the help of Wendy's Wonderful Kids recruiters since 2004.

Wendy's fast-food founder Dave Thomas was adopted and never forgot the support of a loving family. President George H. W. Bush asked him to lead a national adoption awareness campaign in 1990 – and the idea for the Dave Thomas Foundation was born. Like the restaurant chain, it started in Ohio.

The foundation has funded recruiters inside Ohio’s welfare system since 2004. It focuses on adopting older teens like Cipollone and children with special needs.

Hamilton County has seven $75,000 grants for recruiters within the Department of Job and Family Services. They are the only recruiters on staff and, without the foundation grants, the jobs would go away or money would have to be found in the funds from the local tax levy, spokesman Brian Gregg said.

Since 2004, the program has saved the state of Ohio $64 million by moving children out of foster care, according to the Foundation.

Sharon Wiesenhahn started as a Wendy's Wonderful Kids recruiter in Clermont County about seven years ago. She is the only recruiter in that county’s department, hired after years in corporate recruiting and in intake at Clermont For Kids.

Wiesenhahn saw the power of stability in adoption.

“One thing that I loved was kids getting permanency,” she said. "Once a child had an adoptive family, the difference that that made for that child and their future."

With 56 recruiters across Ohio, Wendy's Wonderful Kids' method is different. They work with smaller numbers of children, usually 12-15 per recruiter. And, according to research firm ChildTrends, the Wendy's method is three times as effective as standard procedure. It’s more proactive.

“Kids [usually] get put on a website and their picture is there and it’s really more passive until someone happens to inquire about them,” Wiesenhahn said. “This is all about what the child needs and what’s going to be the best family for this child."

Cipollone, a football and lacrosse player, uses a sports analogy to describe how the Wendy's recruiters work.

Cipollone said he knew he’d found a permanent home with Snyder after his Wendy's recruiter set them up for what’s called a respite weekend: some time away from the group home where Cipollone was living at the time.

Snyder wanted an athletic teen. He joked that he wanted to be a team dad.

“We just instantly had fun the whole weekend and it just felt like he was supposed to be here,” Snyder said. “But I didn’t know how he was feeling until I dropped him off and a kid said, ‘Is that your daddy?’ and he said, ‘It’s gonna be.’”

“It felt like home the first time I went there,” he said.

It wasn’t always such an easy process. Snyder took his required classes when he could, but his work schedule caused years of delays. And then there was the reaction from his family.

Cipollone’s big issue was trust. Bouncing from foster care to group home and around again will do that to a kid.

“Just going from house to house, trying to trust people and not trusting them at the same time is kind of hard,” he said.

But Cipollone’s Wendy’s recruiter was there to answer or talk about any problem, concern or question.

The Dave Thomas Foundation is in the process of scaling up its recruitment program nationwide.

Kentucky just got fully up and running in 2017. Right now, there are 65 recruiters there, and 401 kids have been placed with permanent families, according to the Foundation.

Nationwide, Wendy's Wonderful Kids has more than 475 recruiters and over 9,500 successful adoptions.

“The main thing I’m always asked is ‘Do you get free Frostys?’" Wiesenhahn joked. “The answer is no.”

But a Frosty can help Wendy's Wonderful Kids continue it’s mission. Through January, the restaurants are selling $2 tags for a free frosty with every meal through 2020. All the proceeds go to the Dave Thomas Foundation.