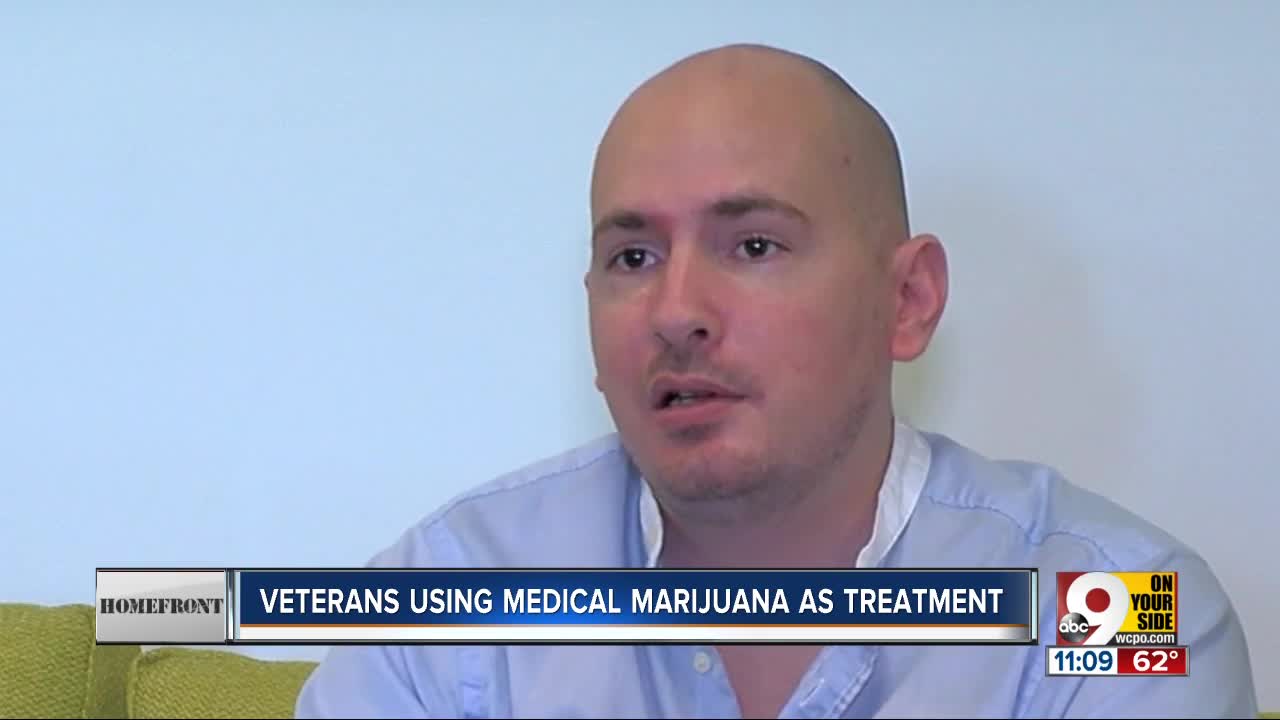 Veterans use medical marijuana to treat mental health issues despite the VA not prescribing it or covering it as a military benefit. 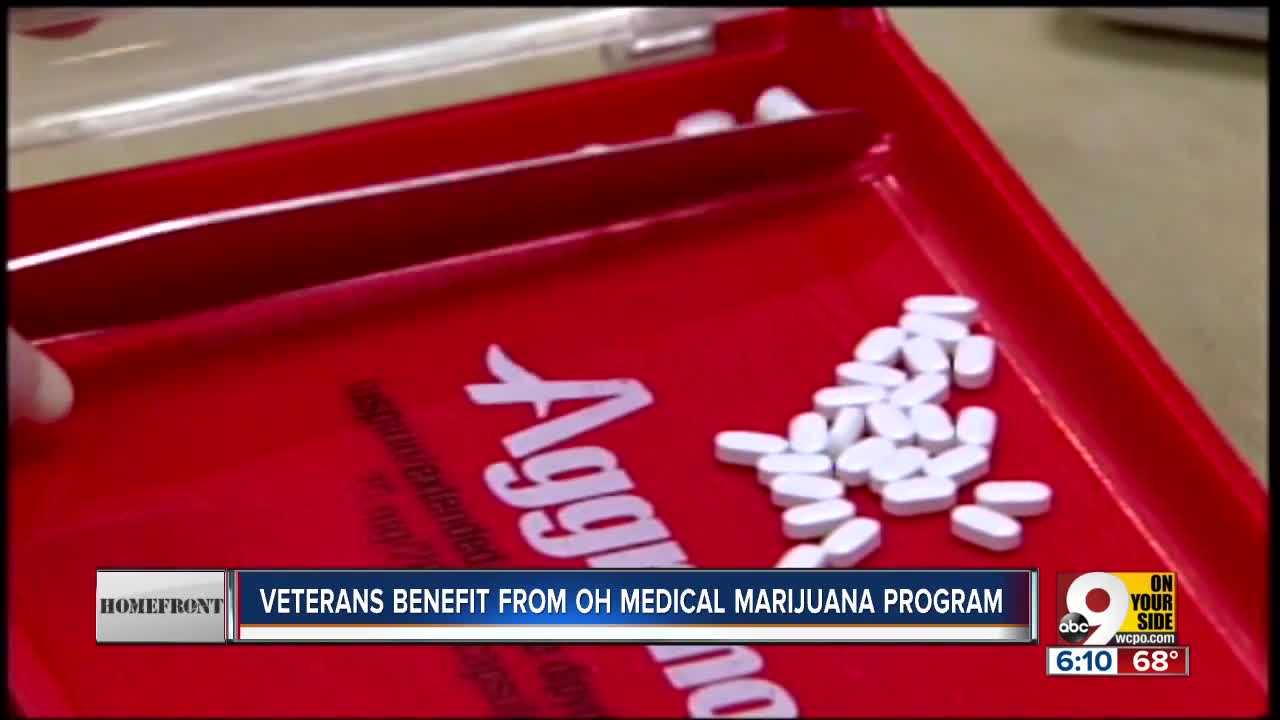 The fog of war is a dangerous place to try to live a normal life.

“Essentially my body ran on autopilot, but my mind wasn’t there,” said Air Force veteran Robert Kowalski. It’s how he describes his condition after returning to Wright Patterson Air Force Base after nearly two years on deployment in Iraq.

“Being a cop, I was arming up every day,” Kowalski said. “I came to, and I was already armed up sitting in my police cruiser and didn’t know how I got there.”

Kowalski said he saw that as a sign to get help for the demons left embedded in his mind from his months-long stay on duty in Southern Iraq at Camp Bucca, and in Mahmudiyah and the infamous Abu Ghraib area south of Baghdad, Iraq.

He was concerned about his mental health. But, he also held fears over going to talk to a mental health professional and the possible impact on his career. He made a decision that ended his career; he used marijuana to calm his nerves with hopes of fixing the problem himself.

“My first deployment wasn’t too bad outside of mortar attacks all the time. It’s like fireworks, you just kind of get used to it going off all the time,” he said. “The second deployment, that’s when I really started seeing things and doing things that you see in movies and it wasn’t until a couple months after I returned home from my second deployment that everything started to spiral out of control.”

Kowalski isn’t alone. I’ve spoken with several veterans, some whom I served with personally, who have tried to self-medicate for the serious mental health issues they face.

However, the website for the National Center for PTSD within the Department of Veterans Affairs (VA) explains, “there is no evidence at this time that marijuana is an effective treatment for PTSD. In fact, research suggests that marijuana can be harmful to individuals with PTSD.”

The VA recognizes the issue of veterans seeking out alcohol, opiates and other medications, legal or otherwise, as a Substance Use Disorder (SUD). The VA does not track marijuana use among veterans, nor does it study marijuana use among the veteran population.

The Air Force reprimanded Kowalski for using marijuana, and ultimately took him off duty and placed him in a back-office position while it processed his separation. He said he was then sent on to base physicians who prescribed him a wide range of medications, which he said negatively affected him.

“They were prescribing me a lot,” Kowalski said. At one point, he said was on sixteen different prescriptions, “And it was getting me in trouble because I was on sleep medication, so I couldn’t wake up and show up to work on time because the medication so messed me up.”

Schneder was an infantryman with the Ohio National Guard. He served for six years, including a one-year deployment to Iraq from 2006 to 2007. He joined in 2004 as soon as he could after the terror attacks of September 11, 2001 even going through basic training in between his junior and senior years of high school.

During his deployment, Schneder said he guarded high profile detainees. He believes his trauma was a direct result of what he saw within the confines of the facility in Iraq.

“A child had been murdered inside the facility,” he said. He declined to go into further details about that incident.

Schneder said he also turned to self-medication when he returned to the United states. He recalls diving into the bottle first, drowning his nightmares in alcohol. Soon he turned to opiates.

“I’m like, 'wow, this helps numb the pain helps me deal with life and makes me feel normal,'” he said.

That numbness and perceived normalcy took two years to unravel his post-service life. In 2017, he landed in the hospital, forced to take a sobering look at himself. He knew his alcohol and opiate abuse wasn’t how he wanted to live, and it wasn’t providing relief to his mental health issues.

“Since then I've been in treatment and I have been opiate free since that day I went into the hospital and I've been going to a PTSD substance abuse group twice a week,” said Schneder.

Today, he’s seeing a social worker and goes for other mental health appointments when he’s really stressed out or having problems coping. That’s in addition to seeing a psychiatrist and therapist on a regular basis.

“Shout out to the VA, it's been a blessing it's really turned my life around,” said Schneder.

Nicholas admits that, while the efforts of the VA helped turn his life around, he doesn’t want to be on more than a dozen pills prescribed every month.

“Particularly the Seroquel which makes me very drowsy and kind of feeling, you always hear vets say I don't wanna go on those meds because they make me feel like a zombie, that's exactly what Seroquel was doing to me,” said Schneder.

He said doctors are lowering that dosage slowly now on the recommendation of his VA provider. He has also started supplementing with a recommendation of medical marijuana from Dr. James Weeks, founder of One Heart Medical based in Cincinnati.

“What I found is when we use, add medical cannabis to the regimen the quality of life is better, pain is better and although we may not be able to completely stop conventional therapies we're able to wean the doses of those down,” Weeks said.

One Heart Medical opened in July, 2019. Weeks said he has around 100 patients, and 15 percent of them are veterans. He said they range in age from their mid-20s to their 70s.

“Those patients have generally used many of the conventional therapies for PTSD and chronic pain including: antidepressants, anti-psychotics, opioids, benzodiazepines and the unfortunate reality is that a lot of those patients are on a combination of those...when you start mixing those all together or individually they can have a significant side-effect profile and also can be ineffective,” said Weeks.

He spent eight years working within the emergency room, ICU and medical wards at Bethesda North and Good Samaritan hospitals. He spent his residency at Christ Hospital. One day he decided providing recommendations on the type of marijuana patients should use to feel better was a better career choice for him.

“I recognized the great value that it has and when we first opened the clinic I guess it was uncharted territory for me in being I would even offer this to the patients,” he said.

“I've been able to offer all the other conventional therapies but now that we've been open for 3 to 4 months and I'm getting feedback from patients and it’s quite remarkable to see how people are doing, how they're responding to this and all different types of disease states.”

The VA does not prescribe it, recommend it and certainly doesn’t pay for it as part of a veteran’s military benefits since it is required to follow federal law.

As long as the Food and Drug Administration classifies marijuana as Schedule I controlled substance, VA health care providers may not recommend it or assist Veterans to obtain it.

The VA’s website also says it won’t deny veterans benefits because of marijuana use and are encouraged to discuss its use with their VA providers.

Schneder said he’s been taking Dr. Weeks’ recommended medicinal marijuana regiment for a month and has also discussed it with his VA physician.

“I saw the value in it probably the second or third day,” he said. “I call it a great supplement. It doesn't replace everything, specifically therapy and things like that, but it's definitely been...a saving grace in a sense. It’s allowing me to get off of pharmaceuticals that have really negative side effects and people are noticing a difference in the way I interact with friends and family.”

While the first month has been smooth sailing, Schneder admits it’s not an option for everyone and that it’s not a total magic wand that suddenly makes the hell of war vaporize.

Kowalski said he moved to Arizona in 2012 and took advantage of their medical marijuana program. He said he was able to do away with all sixteen of his VA prescribed medications. He returned to Ohio in 2014 but hasn’t gotten a medical marijuana card yet since getting it would restrict his second amendment right.

“If we’re calling it a medication why do I have to choose between my medication and my ability to own a weapon,” said Kowalski.

The purpose of the bill is to open the door for veterans to use state-approved marijuana programs. It was co-sponsored by three other Republicans and four other Democrats. None of those lawmakers are from the Tri-state area. The bill now sits in the House Veterans’ Affairs Subcommittee on Health.