Veterans heading back to school find community at UC 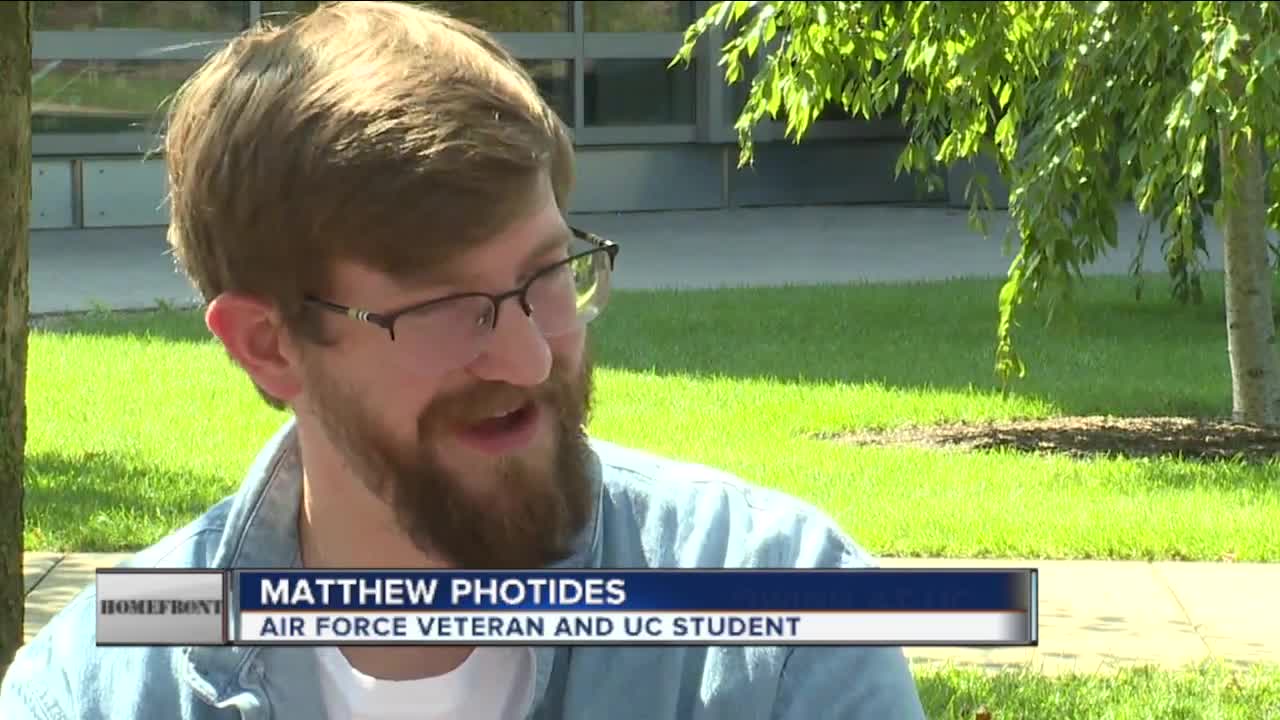 Reintegrating into a traditional educational atmosphere after military service can he hard, Air Force veteran Matthew Photides admitted. But now, entering the first semester of his sophomore year, he’s excited to continue chasing his degree in education. “What seemed like a challenge really turned into a great opportunity,” he said.

Matthew Photides had to take a deep breath when he returned to school at the University of Cincinnati. He was a 22-year-old Air Force veteran flanked in every class by teenagers, and impatience came easy. He might be starting full-time higher education later in life than they were, but he must — he thought — know more than they did.

“When I first came, I kind of thought age equals wisdom and people should hear my opinion,” he said. “Now it’s more I have something to learn from everybody.”

Reintegrating into a traditional educational atmosphere after military service can he hard, he admitted. But now, entering the first semester of his sophomore year, he’s excited to continue chasing his degree in education.

“What seemed like a challenge really turned into a great opportunity,” he said. “Especially if I’m planning on teaching kids that are that age.”

Photides numbers among 2,235 veterans or military-connected students on UC’s campus for the 2019 fall semester, according to the university’s official tally. Many take advantage of the post-9/11 GI Bill to make it happen.

And most pass through the office of Terrence Harrison, who manages UC’s veterans’ programs and services. The Army Reserve veteran helps them sort through their benefits, readjust to the pace and tenor of college life and handle unexpected obstacles, such as National Guard members being called away to deal with a natural disaster in the middle of a semester.

“We have the same shared experiences,” he said. “I don’t care which branch you served in. We still had the same sergeant, the same bad food, the same locations or whatnot.”

Both Photides and Harrison said the largest obstacles to veterans’ and active-duty military servicemembers’ education aren’t on campus. They’re outside, where servicemen and -women might not know all the benefits they’ve earned.

“There’s not great outreach, at least on the initial side of using the education benefits, especially when you’re getting out,” Photides said. “It’s kind of like, ‘Oh, cool, you’re getting out. Here’s all the stuff you need.’ It’s like drinking from a garden hose. You gain a little bit of insight but not much.”

Harrison encouraged anyone curious about whether they would qualify for educational help to get in touch with UC, which partners with the Department of Veterans Affairs to help veteran and active-duty students sort out the programs for which they’re eligible.

Once they arrive, they’ll have a community of other veterans ready to help them through their education.

“Just to be around somebody who’s been where you been, done what you done, that really helps,” Harrison said.