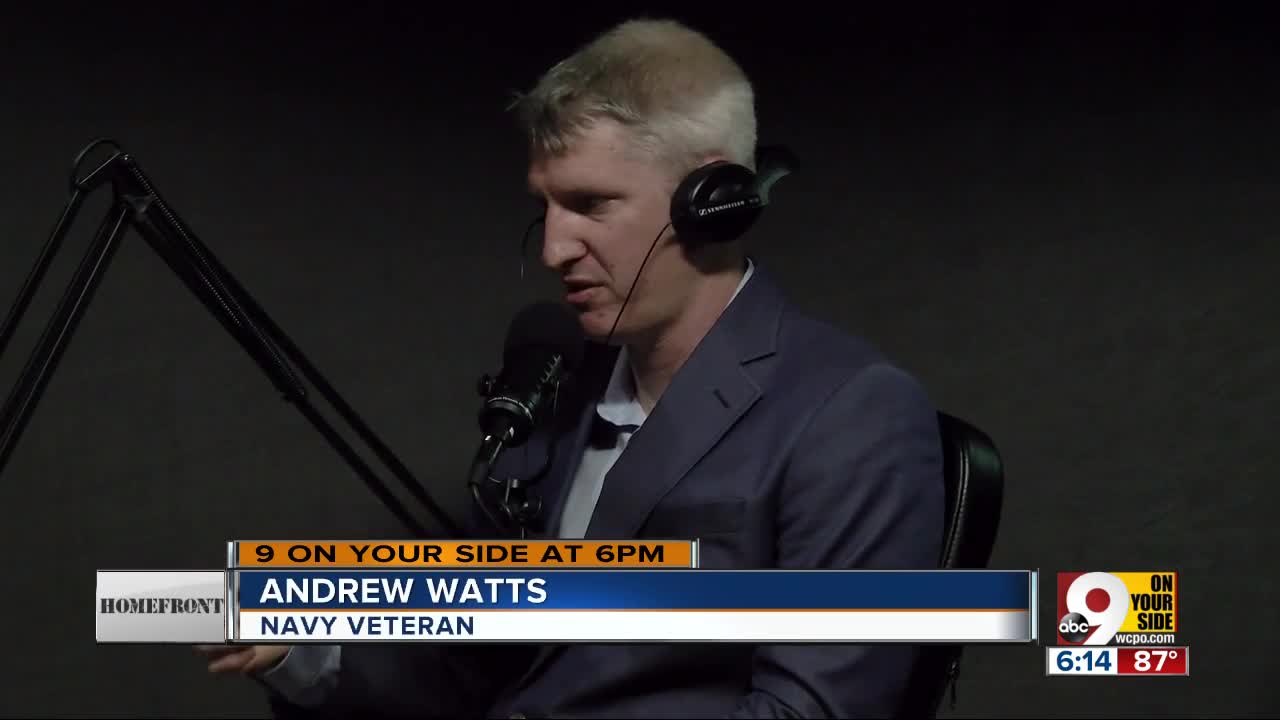 Andrew Watts wasn't yet a bestselling author on April 9, 2009, when he assisted in the daring rescue that would inspire "Captain Phillips."

By: Craig McKee
Posted at 5:00 AM, Jul 08, 2019
Listen to this episode of Homefront in the podcast player above

Andrew Watts wasn't yet a bestselling author on April 8, 2009.

He had just returned from a patrol mission in his Seahawk helicopter and was settling in on the USS Halyburton, where he hoped to get some rest and something to eat.

Then he turned on the TV.

The American Forces Network, which broadcasts TV and radio to U.S. military members stationed overseas, was airing reports of Somali pirates capturing a small cargo ship in the Indian Ocean.

The Maersk Alabama and its 23 crew members had been bound for Mombasa when a skiff carrying four young men pulled up beside them. The group overcame the Maersk Alabama's defensive maneuvers long enough to board with weapons in hand, forcing the majority of the crew into hiding,

Watts jumped up. The urgency of his next mission became clear.

“All of a sudden, the ship started shaking," Watts said, "and I’m looking at the fan tail, and the white water is getting thicker and longer as we were picking up speed."

The USS Halyburton would arrive at the site of the Maersk Alabama in the early hours of April 9.

By the time the ship arrived, along with the USS Bainbridge, the Somali pirates' plan aboard the Maersk had crumbled. Having tried and failed to force the ship's crew to give up under the pressure of armed assailants, the pirates saw only one way out.

They boarded the Maersk Alabama’s bright orange lifeboat and took the ship’s captain, Richard Phillips, as their hostage.

“I was flying — it was probably two in the morning — again nighttime, night vision goggles," Watts said. "I got my FLIR — Forward Looking Infrared Camera — zoomed in to this little orange lifeboat."

Soon, a crackle came across his headset with new orders. Watts was told to fly 10 miles away from the ship, over open water. He asked for clarification for the order.

"The Seals are coming."

“It’s Seal Team Six,” Watts said. “They had flown halfway around the world and did a HALO drop — High Altitude Low Opening — on oxygen and everything in the middle of the night in the middle of nowhere over water.”

Once the Navy Seal team was in the water, they deployed inflatable boats. Watts and his crew escorted the Seal team to the USS Halyburton.

Hours passed as the Seals set up operations and a plan of action. The Seal team transferred to the USS Bainbridge shortly after arriving at the USS Halyburton. The Seal Team 6 snipers would ultimately play the key role in ending the days-long saga April 12, 2009.

“They shot the three remaining pirates and rescued Captain Phillips,” Watts said. “Incredible to be there and witness it and the team work.”

The incident led to the conviction of the surviving pirate, Abduwali Muse, the publication of a first-person account from Phillips' perspective, and, ultimately, the Oscar-nominated film "Captain Phillips."

It changed Watts' life, too.

Watts had always loved reading military novels. He was a self-proclaimed fan of authors Tom Clancy and Vince Flynn. During one of his final deployments in a non-flying role serving on the USS Enterprise, he began doing some writing of his own. He had written about 50 pages of military fiction by the time the deployment ended.

Watts realized just how much material he had after his years spent in the Navy.

On many days, Watts would spend hours flying routine patrols above what felt like a never-ending landscape of water across the Gulf of Aden. On others, he spent hours chasing small boats full of reported Somali pirates who were trying to escape back to the shoreline.

“I remember flying right next to them about 10 feet away, and that was one of the times where they’re brandishing their weapons and everything but they’re just starring back at me," he said. "They know if they stop they’re going to get into trouble, but if they keep going they might have a chance of outrunning us.”

On one mission, Watts noticed he was getting low on fuel and radioed to a nearby British Navy ship to get permission to land and refuel. Once topped off, Watts said he and his crew were given two bags. One was full of mayonnaise and cucumber sandwiches. The other was full of apples.

They launched from the ship and continued to follow the small Somali speedboat. Watts wasn’t authorized to use ordinary force during his engagement with the boat. However, in the dark of night flying with night vision goggles, he and his team came up with a different tactic.

“We commenced with bombing runs with apples,” Watts said.

Eventually, a Canadian ship cut off the small speedboat and the pirates stopped. A security team then boarded the boat to gather intel on the Somali crew.

“When they came and got their biometrics, there were apples everywhere,” Watts said.

As he departed the Navy in 2012, Watts' new adventure brought him to Cincinnati, where he became an assistant brand manager at Procter & Gamble. Watts said his job there helped him learn new skills and techniques that he would apply to his writing.

“It was addictive. I enjoyed it,” Watts said. “I enjoyed writing, and people were actually enjoying what I was doing.”

What he found, he said, is that fans could see the truth where it was needed and knew the military fiction he wrote came from a place of realism and knowledge of the subject matter. Watts doesn’t have to ask someone what it feels like to land on a ship at night or what the galley of an aircraft carrier smells like because he’s lived it.

“I have readers that write me every day," Watts said, "and they will say, 'Hey, this brought me back to my time in 1967 in the USS whatever off the coast of Vietnam,' and that’s really cool to be able make people enjoy my work like that.”

His passion for the written word has led him to publish seven books. His next is set for release in December. Watts also launched his own publishing company, Severn River Publishing, to help launch the dreams of other authors.

His best advice for any new authors wishing to publish and give it a shot?

“Go ahead and put out a bad book," Watts said. "I would do it exactly the way I did. I would write something, put something out there, get it professionally edited, professional cover designer to do your cover, and then take a course or two to learn how to do some marketing.”

Watts recommends using Kindle Direct Publishing through Amazon, which can give new authors a window to publish minus the obstacles associated with traditional publishing.