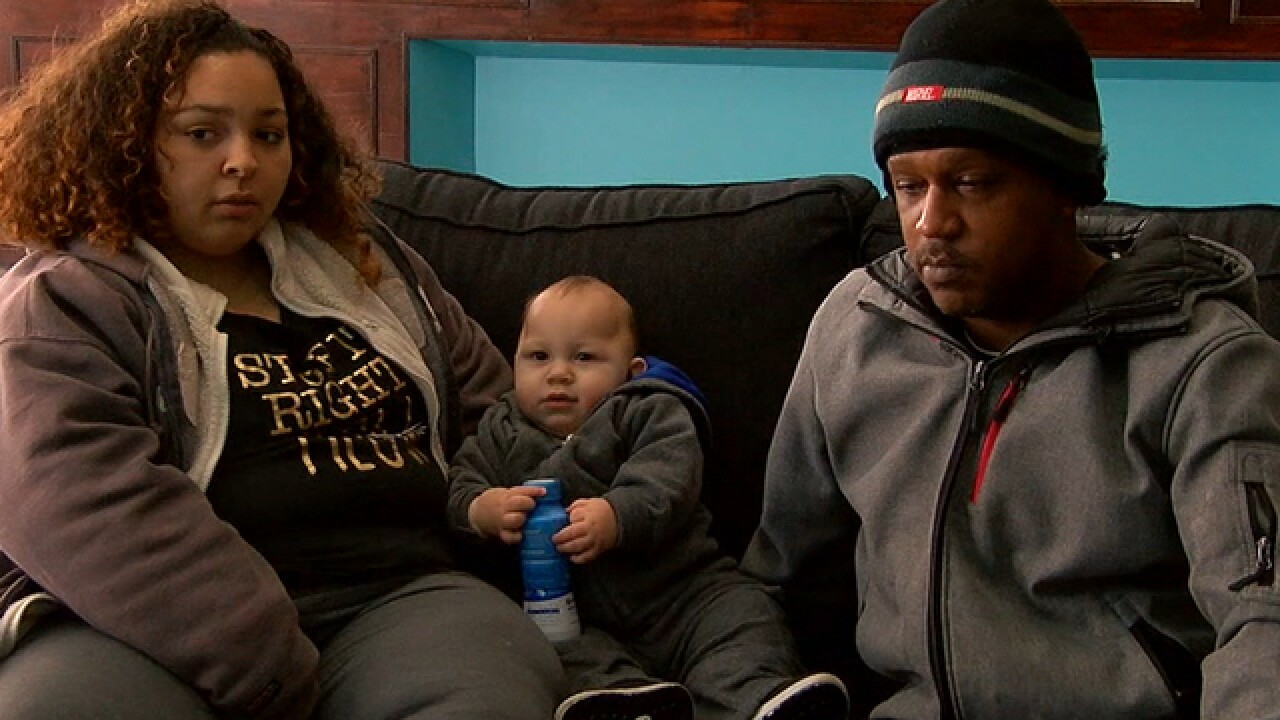 Copyright 2018 Scripps Media, Inc. All rights reserved. This material may not be published, broadcast, rewritten, or redistributed.
<p>Jaquita Clark and Robert Clark with their infant son.</p>

Clarification: A prior version of this story indicated the family was turned away from the only emergency homeless shelter in Northern Kentucky operating with low barriers and no waiting list. That's true, but that shelter does not accept anyone under the age of 18 and does not say it does.

COVINGTON, Ky. -- A family with a 9-month-old infant found Sunday that no emergency shelters existed for people with children in Northern Kentucky.

Their story is just one example of people experiencing homelessness who fall through the gaps in available services. Family shelters, which exist elsewhere in Greater Cincinnati, often have wait lists.

Robert Clark, his pregnant wife Jaquita Wilson and their infant son left Indiana when they couldn't pay rent. He's recently out of work in Northern Kentucky, and now also without a home.

"There's nothing, nothing," Wilson said.

Over the weekend, someone at the hospital recommended they try the Emergency Shelter of Northern Kentucky, but the shelter doesn't take anyone under 18. The people there spent about an hour unsuccessfully trying to find the Clarks a place to go.

Executive Director Kim Webb said "the staff was crushed" and she lost sleep knowing she had to turn the family away.

The shelter isn't built to handle the needs of young children, according to Webb.

"It's a liability," she said. "It's a safety issue. It's understanding the population we are designed to serve is facing active addiction or adults with mental health crisis."

The shelter is so full, they're letting people sleep on mats on the floor because there aren't anymore bunks.

The Clarks ended up at Lee's Famous Recipe Chicken, where someone called the group Maslow's Army, which aims to help those experiencing homelessness. With the help of donations, the group is providing the family with 10 days in a hotel, as well as food, formula and clothes.

"Just knowing that she was sitting at Lee's, not knowing what to do next, she should not have been put in that position," Susan Landis of Maslow's Army said.

Members of the group said they're disgusted at the gap in services. Webb agreed, saying there is no emergency shelter service for an adult with a child in Northern Kentucky.

"Where are the families going right now? They're probably heading to the library or to a public building that can do that," Webb said. "But when the sun goes down and, if they're homeless, where are they headed? That is a gap."

The Clarks are taken care of now, but disheartened.

Family Promise of Northern Kentucky said a spot just opened up for a family, but there is an intake process. Across the river in Ohio, Bethany House can help if a family shows up at an emergency shelter.

Webb said she has been meeting with local leaders to make sheltering a bigger priority.

"We are looking to have support from additional counties outside of Kenton County," she said. "That is a challenge."