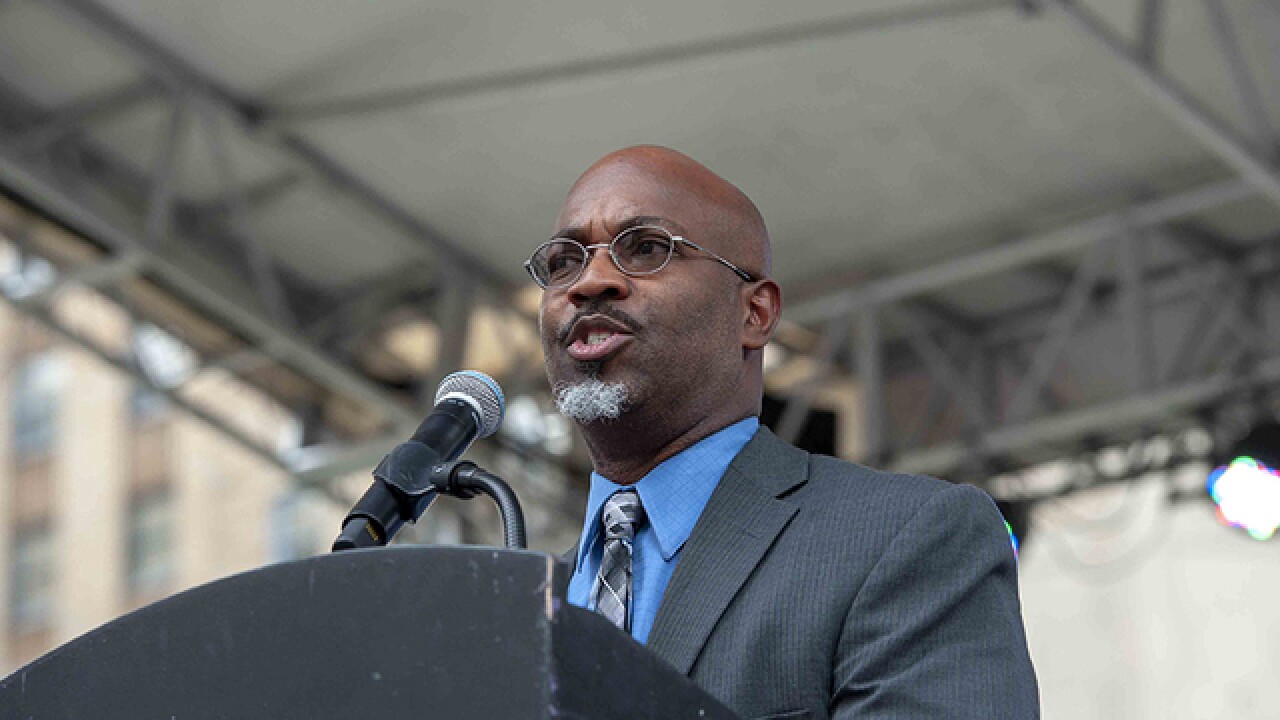 Copyright 2018 Scripps Media, Inc. All rights reserved. This material may not be published, broadcast, rewritten, or redistributed.
Joe Simon
Pastor Ennis F. Tait pictured during a vigil for victims of the September 2018 shooting at Fifth Third Center Downtown.

CINCINNATI — Just a few weeks into the Child Poverty Collaborative’s new effort to reduce poverty in Cincinnati and Hamilton County, the only African American on the group’s top volunteer leadership team considered resigning his position.

Pastor Ennis Tait has been leading community outreach and engagement efforts for Project LIFT, a $5 million initiative that aims to reach 1,000 families this year.

But Tait submitted a “letter for consideration of resignation” about three weeks ago, he said, and raised questions about whether the Child Poverty Collaborative’s work could be more effective.

“As a black man from the black community, I think there are other things we can be doing,” Tait told WCPO. “We can no longer do the ‘great white hope’ approach where you have a group of white people who are sensitive and sincere.”

"I continue to keep learning from him, and I think he brings a perspective that we need to be listening to and learning from and asking questions," Duffy said. "He does bring a positive spirit and approach, and he brings a whole spiritual dimension that I think is valuable, too."

The Child Poverty Collaborative formed in 2015 with a goal of helping 5,000 Cincinnati and Hamilton County families lift themselves and their 10,000 children out of poverty within five years.

U.S. Census Bureau data released in December estimated nearly 43 percent of children in the city of Cincinnati live below the federal poverty level, which amounts to a household income of $20,780 or less for a family of three. In Hamilton County, nearly one in four children, or 24.8 percent, live in poverty.

The census estimates also showed a racial divide when it comes to individuals and families living in poverty.

Grappling with the role that racism plays in the region’s persistent poverty problem has proven difficult.

Tait is listed as a member of the larger volunteer steering committee. Tait said his name was removed from the list of top leaders “inadvertently,” adding, “I am still serving as a co-chair.” Duffy confirmed that leaving Tait off the list of co-chairs was a mistake.

The other African American co-chairs left the group for different reasons.

'It's going to take the best of all of us'

Owens said he resigned as a co-chair because after nearly three years, the collaborative didn’t have much to show for its efforts.

“The new group came in. They were going to have four teams, and none of the teams had an African American chairing it,” Owens said. “African Americans can’t be an afterthought. If we’re the majority of the people you’re going to be dealing with, then you have to reflect that.”

Johnson, the first African American leader of the local United Way, left the Child Poverty Collaborative when he left his job at United Way after just a few months at the helm.

He accused United Way’s former board chair of making “subtle threats” and creating a “hostile work environment,” prompting other African American leaders to issue a call for action for more “inclusive leadership.”

Baker experienced serious health problems in 2018. She stepped down from the collaborative and retired from her position at the Urban League.

“Those are our iconic leaders,” Tait said. “Those people helped me to understand and see what was important to being a grassroots leader. When Dr. Owens left and Donna Jones Baker left, it left a major hole in the Child Poverty Collaborative.”

Tait said the group’s work is important to him, and he wants to remain involved.

He believes other grassroots community leaders should be more involved, too.

Child Poverty Collaborative leaders told WCPO in December that the group had raised $1.5 million out of the $5 million it needs for its work this year. Duffy said the group has gotten additional financial commitments and continues to raise funds.

Tait is embarking on his own effort to raise about $500,000 for Project Lifeline to hire staff and keep it going for two or three years. He launched Project Lifeline to reach low-income families who weren’t already connected with Hamilton County Job & Family Services or local nonprofit agencies but could benefit from the Child Poverty Collaborative’s efforts.

Instead of continuing to help manage Project LIFT, Tait said he wants Project Lifeline to be one of the partnering agencies that helps families connect with other services for help.

“The work that has been accomplished up until this point has been tremendous. I think there are other boots on the ground that need to be recruited,” Tait said.

Tait said he wants to be viewed as a community leader, not a “black leader from the black community.”

Still, he said, race cannot be ignored when it comes to tackling the complex issue of poverty here.

“Cincinnati, if it’s going to work, black people have to have power and influence,” he said.

The Child Poverty Collaborative's goal is to empower families to lift themselves out of poverty, Duffy said, and change the systems and structures that make it difficult for them to do that.

"I think all we're trying to do is our best here, and it's going to take the best of all of us to address this," she said. "Our numbers and our situation, we knew at the start that they were not good. And we've got to start changing systems and structures if we're ever really going to see a true difference."