Analysis: Meet the opioid wholesalers who became middlemen for the heroin epidemic 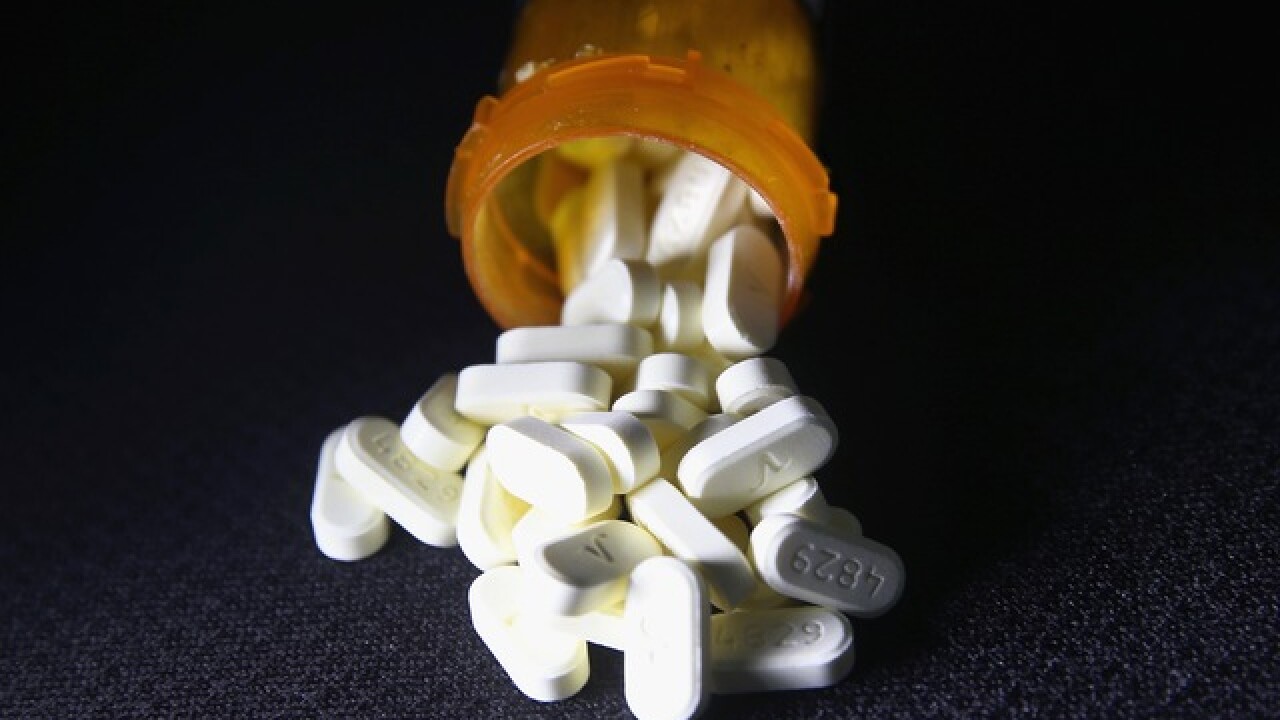 This article is part of the WCPO.com project "Heroin: How Do We Respond?"

You can view the I-Team story tonight on WCPO 9 On Your Side at 6 p.m.

As the nation's opioid addiction grew out of control in the five years between 2007 and 2012, one Cincinnati company sold more than 4 million doses of highly addictive prescription pain pills to one county.

Omnicare, a big supplier of drugs to pharmacies, hospitals and nursing homes, is one of at least five Cincinnati-area companies now in the sights of states and counties fighting back against the opioid epidemic that is killing their residents, draining their budgets and stretching their resources to the breaking point

These companies played a key role in the epidemic, shipping millions of doses of addictive narcotics around the country, including to doctors' offices and pain clinics that became known as "pill mills," the lawsuits say.

Omnicare and other pharmaceutical wholesalers typically conducted business behind the scenes, supplying retail drug stores, hospitals and nursing homes with the pharmaceuticals they order for their patients and customers. But the tsunami of pain pills that washed over the country and, in particular, here in the nation's heartland, would not have happened without their participation.

They are, essentially, drug dealers, selling prescription narcotics that are chemically akin to heroin and doing it on a massive scale. Whether they did so legally or not is the question.

A growing number of cities, counties and states claim they haven't and are suing these drug middlemen, saying they precipitated the heroin and opioid epidemic that has cost so many lives and damaged so many others.

Many people began their journey into addiction with pain pills such as Oxycontin and Vicodin, which they often acquired from disreputable doctors or pain clinics. But when the street price of the pills became too high and states cracked down on the pill mills, many of the addicted turned to heroin, which was cheaper and even easier to get.

On Tuesday, the city of Cincinnati became the latest jurisdiction to sue pain pill wholesalers when it targeted three major ones -- Cardinal Health, McKesson Corp. and AmerisourceBergen. A day later, Hamilton County agreed to join that lawsuit.

In July, Clermont County declared the opioid epidemic a public nuisance and sued the same three wholesalers. Six other Southern Ohio counties, including Brown County, have joined that lawsuit.

The state of Kentucky says it plans to sue distributors, and the state of Ohio is considering doing the same.

The Omnicare sales figures come from a lawsuit filed in March by the commissioners of Kanawha County, West Virginia, the home of that state's capitol, Charleston.

All the companies are part of a previously obscure link in the chain that supplied doctor's offices and consumers with pain medicine, and led -- many experts agree -- to addiction and heroin.

Carol Wagner's son, Chad, died of a heroin overdose at the age of 37. His addiction started with the painkillers Oxycontin and Vicodin, which a doctor prescribed for his carpal tunnel syndrome.

"He was a wonderful kid," said Carol, who lives in Fort Mitchell. "He went to the University of Kentucky, he played ice hockey for the university. He was handsome, he was charismatic, he was hard-working. He was all the things you would want in a child."

By the time he overdosed and died in a Cincinnati halfway house on May 20, 2005, he had lost his marriage, his home and had filed for bankruptcy because of his addiction.

His mother says drug wholesalers and others should answer for the drug epidemic.

"We are in an opioid crisis," she said. "People are dying. They need to be held accountable."

But holding them accountable is not always easy.

At least two local wholesalers years ago attracted the attention of the U.S. Drug Enforcement Administration, which tried to shut them down.

One, Masters Pharmaceutical, has been under investigation by the DEA for nearly 10 years.

In 2008, the agency threatened to revoke the company's license to sell controlled substances such as pain pills, saying it violated the law by selling the powerful narcotic hydrocodone to "rogue Internet pharmacies."

Masters employees should have known that those orders were suspicious, the DEA said.

The company reached a settlement with the DEA, but by 2013, the feds again threatened to revoke its license. Employees were still failing to detect and report suspicious orders of oxycodone, better known by brand names Oxycontin and Percocet, it said. The company had filled orders of millions of doses of those drugs to eight "illegitimate pharmacies" in Florida and Nevada, the DEA argued.

Federal regulations require wholesalers to report to the DEA suspicious orders of narcotics. These can include orders that are unusually large or are made too often. The agency requires the wholesaler to investigate suspicious orders and refuse to fill them if they are suspect.

But "Masters employees frequently simply brushed suspicion under the rug by deleting orders or paring them down and shipping them without reporting them to DEA," federal judge Susan Dlott ruled in a 2011 lawsuit.

Still selling, even as DEA investigates

Masters has fought the DEA's enforcement at every step and continued to sell opiates while its case has been under appeal. The company operates distribution centers in Fairfield and Forest Park. Last week, a federal appeals court judge in Washington, D.C. ruled against the company, clearing the way for the DEA to suspend its license.

But the company will stay in business because the DEA approved a license for a new Masters facility in Mason in December 2016, even as the previous case worked its way through appeals.

Keysource Medical is a relatively small, independent drug supplier operating out of just one facility in Blue Ash. But DEA investigators paint a portrait of a company that played an outsized role in the pain pill wave that inundated the country.

Keysource specialized in generic hydrocodone and oxycodone, which the DEA calls the most widely abused pills in the country. Although it is a relatively small supplier, Keysource became one of the top wholesalers of pain pills to Florida pharmacies, the DEA said.

In a two-year period, Keysource sold more than 59 million doses of oxycodone to customers in 40 states, the DEA said. The vast majority of that -- 78 percent -- was sold to pharmacies in Florida, which was known as a haven for pill mills, the DEA said.

Some of those pills made their way back to Ohio and Kentucky via what DEA officials called the "Florida Pipeline" or the "Oxycontin Express." Drug traffickers would hire people to drive to pill mills in Florida every two weeks or so, buy oxycodone for $40 a bottle, drive it back to Ohio or Kentucky and sell it on the black market for $1,500 a bottle, according to a DEA narrative.

In 2011, the DEA raided Keysource's Blue Ash office and seized sales records, emails and letters. It suspended the company's license to sell narcotics "to stop KMI from adding any more fuel to the flame of what is an imminent and serious public health problem."

Keysource "was sending tens of millions of pills of oxycodone into Florida, the national epicenter of the pill problem," a DEA investigator said in court documents.

The company "was the number one independent distributor in the country for sales of oxycodone in 2010 and in the first three months of 2011," the investigator said. "No other single-facility distributor distributed more oxycodone during that period."

Like Masters Pharmaceutical, Keysource and its employees are accused of manipulating records to hide unusually large orders from pill mills.

Wholesaler-supplied pill mills were the drug dealers for many like Amy Parker, who got addicted and then turned to heroin after first being prescribed narcotics by a doctor.

More than 10 years ago, Amy saw a doctor in Hamilton for back and knee pain. After waiting hours to see him -- a line of patients stretched down Route 4, she says -- he prescribed her the powerful painkillers Opana and Oxycontin in an appointment that lasted just minutes. She ended up addicted, and when she could no longer get the pills, she turned to heroin.

Amy, who lives in West Chester now, survived pain pills and heroin and has been in recovery for nearly five years.

Many more have not survived.

Who is 'financially responsible'?

Now, cities, counties and states in need of money to clean up the ongoing carnage are suing these companies, accusing them of knowingly fostering the gross overprescription of painkillers. And they are seeking compensation.

"These community-based problems require community-based solutions which have been limited by budgetary constraints at the state and federal levels," the West Virginia lawsuit says. Cincinnati wants to hold the distributors "financially responsible for … the hazards to public health and safety" they caused.

Both Cincinnati and Clermont County officials are seeking damages to compensate for the costs of medical care for overdose patients, the costs for treatment and rehab, costs for babies born addicted and increased costs of law enforcement. They're also seeking punitive damages.

The Cincinnati-area distributors had little to say about the lawsuits or the DEA actions.

Keysource Medical's CEO, Todd Szewc, would not comment on the lawsuit or the DEA action.

An attorney for Masters Pharmaceutical did not comment on the charges, but emailed briefs filed by three pharmaceutical trade associations that said the DEA changed its reporting requirements without enough notice.

Omnicare is now owned by pharmacy giant CVS. An official there said, "We believe the allegations have no merit." She also emailed a general statement that said "CVSHealth is committed to the highest standards of ethics and business practices, including complying with all federal and state laws governing the dispensing of controlled substance prescriptions, and is dedicated to reducing prescription drug abuse and diversion."

Kroger would not comment or even provide information about its affiliates that supplied its pharmacies.

Although these lawsuits have the potential to bring milions to budget-strapped communities, it's unlikely they will be settled anytime soon. Attorneys expect such cases to last about two years.