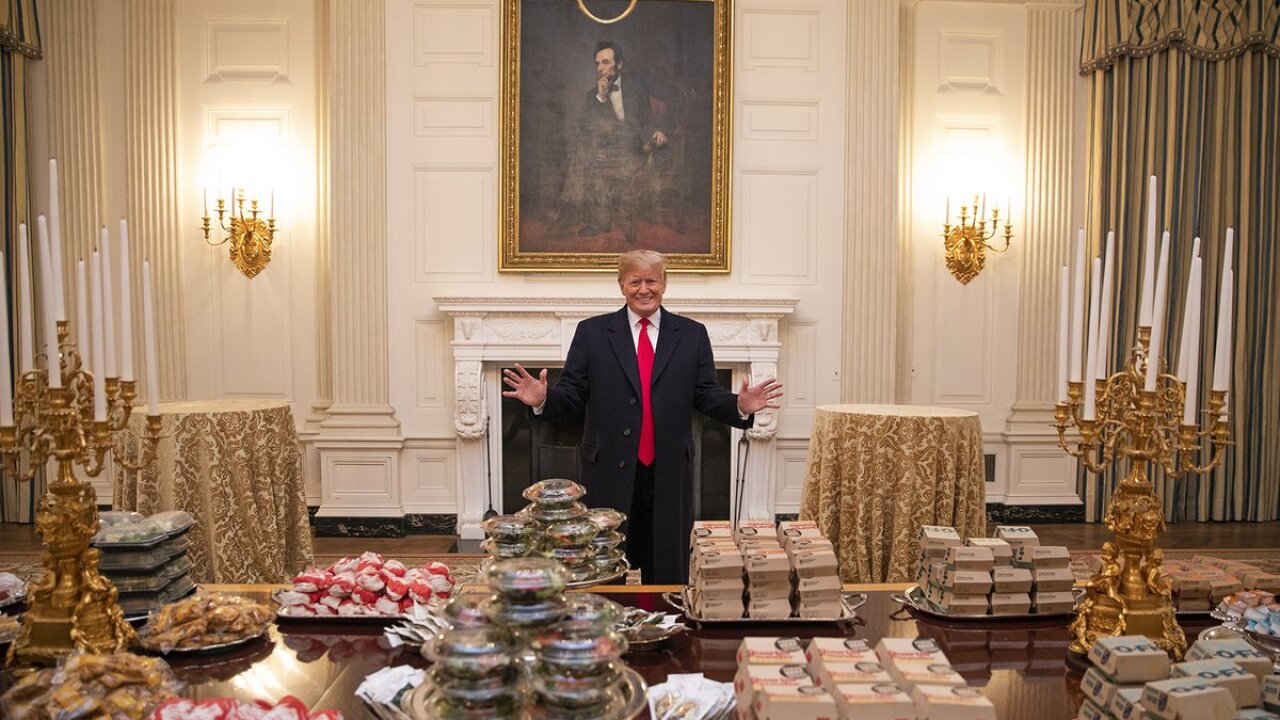 President Donald Trump is personally paying for the meals that will be provided to the Clemson University football team during their national championship celebration at the White House on Monday night, CNN has learned.

Earlier Monday, Trump told reporters, unprompted, that he is serving "McDonald's, Wendy's and Burger King's with some pizza."

"I think that would be their favorite food, so we'll see what happens," he added.

"Because the Democrats refuse to negotiate on border security, much of the residence staff at the White House is furloughed -- so the President is personally paying for the event to be catered with some of everyone's favorite fast foods," he said.

Returning to the White House on Monday evening from a brief trip to New Orleans for a speech, Trump told reporters that he was providing the Tigers with the fast-food dinner -- "paid for by me" -- as a result of the shutdown.

"Because of the shutdown, you know we have the great Clemson team with us, the national champions. So we went out and we ordered American fast food, paid for by me," Trump said. "Lots of hamburgers, lots of pizza."

"We have some very large people that like eating. So I think we're going to have a little fun," he added.

Standing behind a table brimming with fast food, Trump promoted the dinner for Clemson as "great American food."

"If it's American, I like it. It's all American stuff," he added, noting the smorgasbord of pizza, "300 hamburgers, many, many french fries -- all of our favorite foods."

Trump closed his brief remarks in the dining room by returning to his message of border security.

"I will say the Republicans are really, really sticking together. It's great to see because we need border security. We have to have it."

In a series of tweets Monday morning, Trump continued to try to shame Democrats for not negotiating with him over the shutdown, though it's not clear he's offering anything different than when talks crumbled last week.

Trump has been making a point of telling his followers that he's at the White House waiting -- and is clearly frustrated he's not getting credit for remaining in Washington -- as opposed, presumably, to traveling to his Mar-a-Lago resort in Palm Beach, Florida.

The President has repeatedly vowed not to budge from his demand over a border wall, but rejected an idea he floated last week that he would simply bypass Congress and fund a border wall by declaring a national emergency.

The White House is operating with a thinned-out staff caused by the partial government shutdown , now in its 24th day, and snowy Washington weather.

Much of the Executive Residence staff, who are ordinarily responsible for catering such receptions, are either furloughed or at home because of the federal government snow closure.