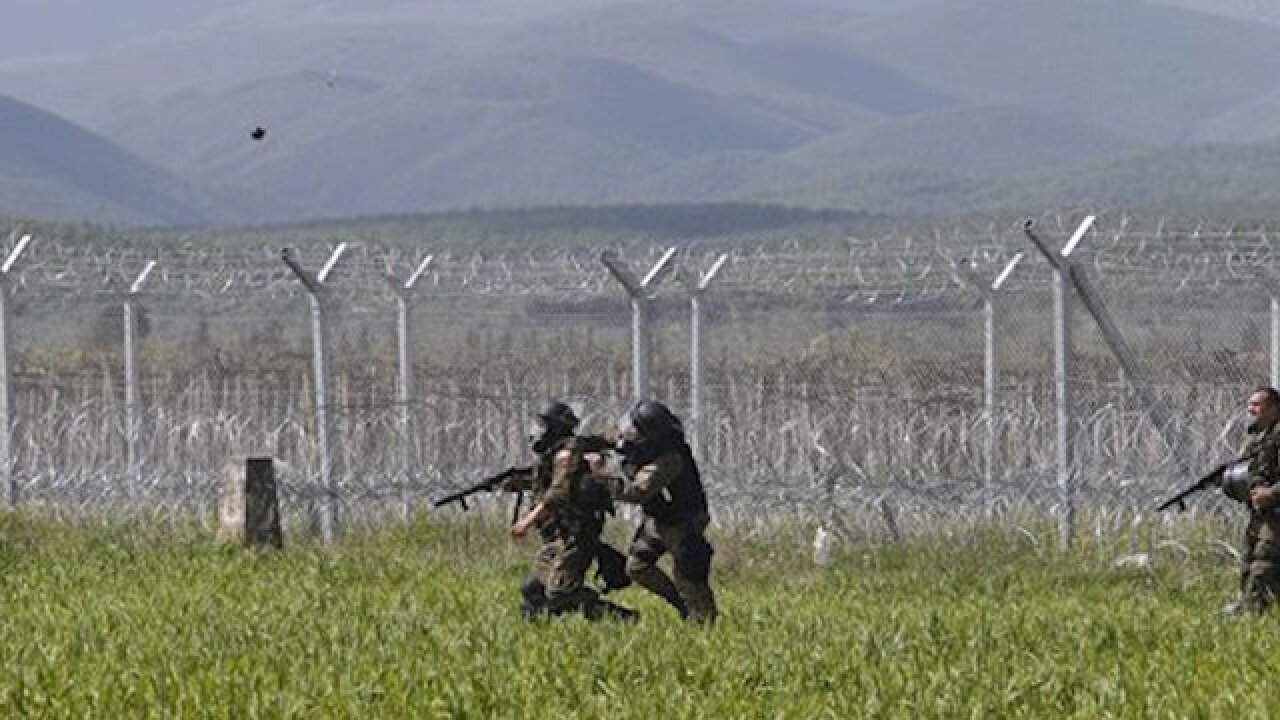 Amel Emric
<p>Macedonian policeman throws a percussion sound grenade during clashes between migrants and Macedonian police during a protest at a fence at the northern Greek border point of Idomeni, Greece, Sunday, April 10, 2016. Some thousands of migrants protested at the border and clashed with Macedonian police.(AP Photo/Amel Emric)</p>

IDOMENI, Greece (AP) — Migrants waged running battles with Macedonian police Sunday after they were stopped from scaling the border fence with Greece near the border town of Idomeni, and aid agencies reported that hundreds of stranded travelers were injured.

Macedonian police used tear gas, stun grenades, plastic bullets and a water cannon to repel the migrants, many of whom responded by throwing rocks over the fence at police. Greek police observed from their side of the frontier but did not intervene.

Clashes continued the afternoon as migrant groups twice tried to overwhelm Macedonian border security. The increasing use of tear gas reached families in their nearby tents in Idomeni's makeshift camp housing more than 11,000 migrants trying to pass through the Balkans to reach Western Europe. Many camp dwellers, chiefly women and children, fled into farm fields to escape the painful gas.

Observers held out hope that evening rainfall, which began about seven hours into the clashes, would dampen hostilities.

The aid agency Doctors Without Borders estimated that their medical volunteers on site treated about 300 people for various injuries.

Achilleas Tzemos, deputy field coordinator of Doctors Without Borders, told The AP that the injured included about 200 experiencing breathing problems from the gas, 100 others with cuts, bruises and impact injuries from nonlethal plastic bullets. He said six of the most seriously injured were hospitalized.

The clashes began soon after an estimated 500 people gathered at the fence. Many said they were responding to Arabic language fliers distributed Saturday in the camp urging people to attempt to breach the fence Sunday morning and "go to Macedonia on foot."

A five-member migrant delegation approached Macedonian police to ask whether the border was about to open. When Macedonian police replied that this wasn't happening, more than 100, including several children, tried to scale the fence.

Giorgos Kyritsis, a spokesman for the government's special commission on refugees, said Macedonian forces had deployed an "indiscriminate use of chemicals, plastic bullets and stun grenades against vulnerable people." But he said blame for Sunday's trouble had to be shared with those in the camp spreading rumors of border openings.

Kyritsis said the Idomeni campers should "not believe the false rumors spread by criminally irresponsible individuals and to cooperate with Greek authorities that guarantee their safe transfer to organized temporary hospitality locations."

Many migrants expressed confusion over the situation, unaware that European Union governments support Macedonia's decision in early March to block the migrant flow from northern Greece. They expressed reluctance to accept Greek offers of better accommodation far away from their often muddy, cold border encampment.

"Europe tells everyone to come, but Macedonia has shut down its borders," said Hassan Mohamed, a 19-year-old Kurd from Aleppo, Syria, who has been at the Idomeni camp for two months alongside his mother, sister and brother.

He dismissed the idea of taking Greece's offer of accommodation elsewhere as "too slow."

Abd Ahmad, 27, an Iraqi Kurd who is traveling with his wife and their 1-year-old daughter, said life in the Idomeni camp was "difficult for the child" — but not nearly as dangerous as conditions back home. He said Islamic State militants killed a 7-year-old sister and 11-year-old brother in Iraq, while another brother already had reached Germany and another sister was in Finland. He remained hopeful that eventually, Macedonian authorities would relent and allow them through.

Greece remains committed to enforcing the EU-Turkey agreement that requires most migrants currently in Greece to be deported back to Turkey. Besides Idomeni, Greece is trying to clear makeshift camps by the end of April at three other locations containing a total of more than 10,000 people: a gas station 17 kilometers (11 miles) south of Idomeni, the port of Piraeus, and the site of Athens' defunct former airport.

The planned deportation of 6,750 migrants on Greek islands back to nearby Turkey has been suspended because Greek officials, too few in number, have been overwhelmed by the volume of asylum applications.