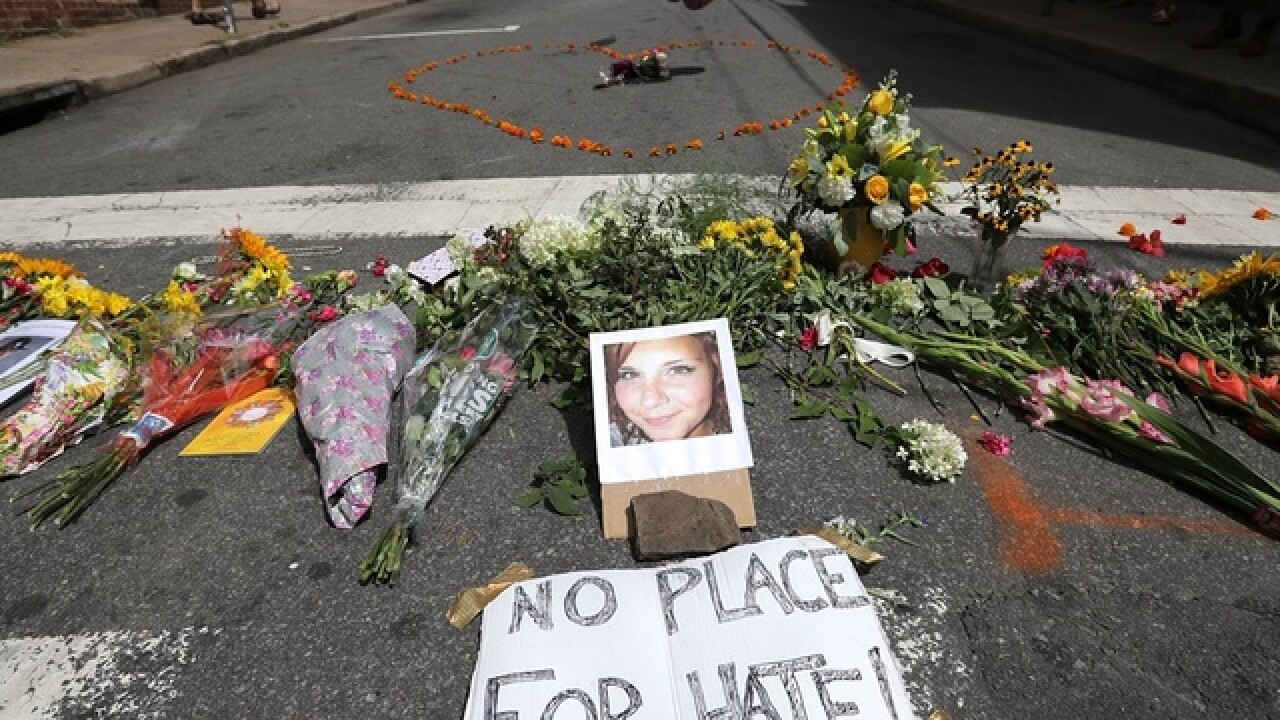 Image copyright 2017 Getty Images. All rights reserved. This material may not be published, broadcast, rewritten, or redistributed.
Chip Somodevilla/Getty Images
<p>CHARLOTTESVILLE, VA - AUGUST 13: Flowers surround a photo of 32-year-old Heather Heyer, who was killed when a car plowed into a crowd of people protesting against the white supremacist Unite the Right rally, August 13, 2017 in Charlottesville, Virginia. Charlottesville is calm the day after violence errupted around the Unite the Right rally, a gathering of white nationalists, neo-Nazis, the Ku Klux Klan and members of the 'alt-right,' that left Heyer dead and injured 19 others.</p>

The woman killed Saturday in a car attack in Charlottesville worked as a paralegal in Virginia.

Heather Heyer, 32, was pronounced dead at University of Virginia Hospital after a driver rammed a gray Dodge Challenger into people protesting a white supremacist rally. Nineteen other people were injured.

"She died doing what was right. My heart is broken, but I am forever proud of her," Felicia Correa said on behalf of Heyer's mother.

Mourners placed flowers around a photo of Heyer early Sunday. A GoFundMe account set up for her family had raised more than $180,000 by that afternoon.

"This senseless act of violence rips a hole in our collective hearts," a statement from the Charlottesville city government said.

White supremacists and other groups gathered in Charlottesville to protest that city's decision to remove a statue of Confederate Gen. Robert E. Lee, enshrined in bronze on horseback in the city's Emancipation Park. Heyer was among the counter-protesters when she was killed; the city said she died "exercising her peaceful first-amendment right to speech."

James Fields Jr., 20, of Monclova Township, Ohio, faces a count of second-degree murder and other charges. Charlottesville police said Fields, driving the Dodge, caused a chain-reaction crash that pushed vehicles into the crowd.

His radicalized views on race, combined with his mental health history, may have created a "perfect storm," Weimer said.

"I thought at times I got through to him, but obviously not," he said.

Saturday's chaos claimed the lives of two law enforcement officers, when a Virginia State Police helicopter crashed outside the city. Both troopers aboard, Lt. H. Jay Cullen, 48, and Berke M.M. Bates, one day shy of his 41st birthday, were killed. Police said the helicopter had been deployed to the violent protests.

"These men gave their lives in the line of duty," the city government said, "and our gratitude to them cannot be overstated."