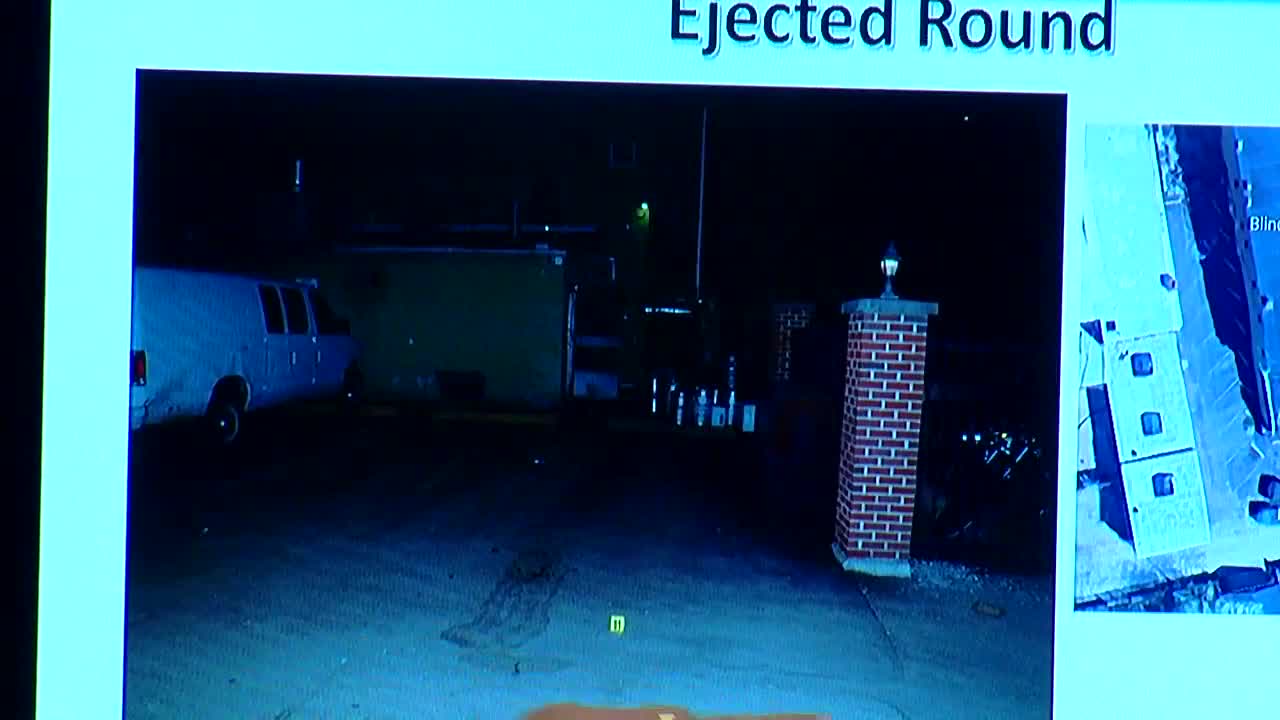 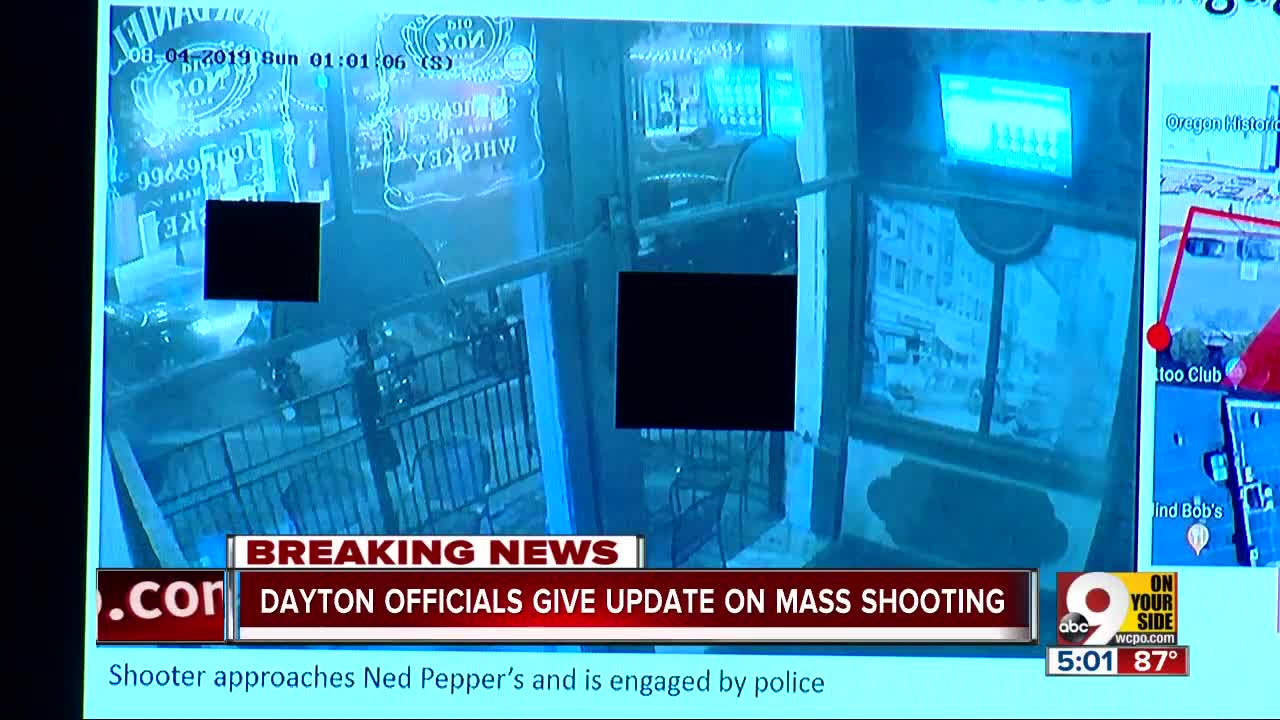 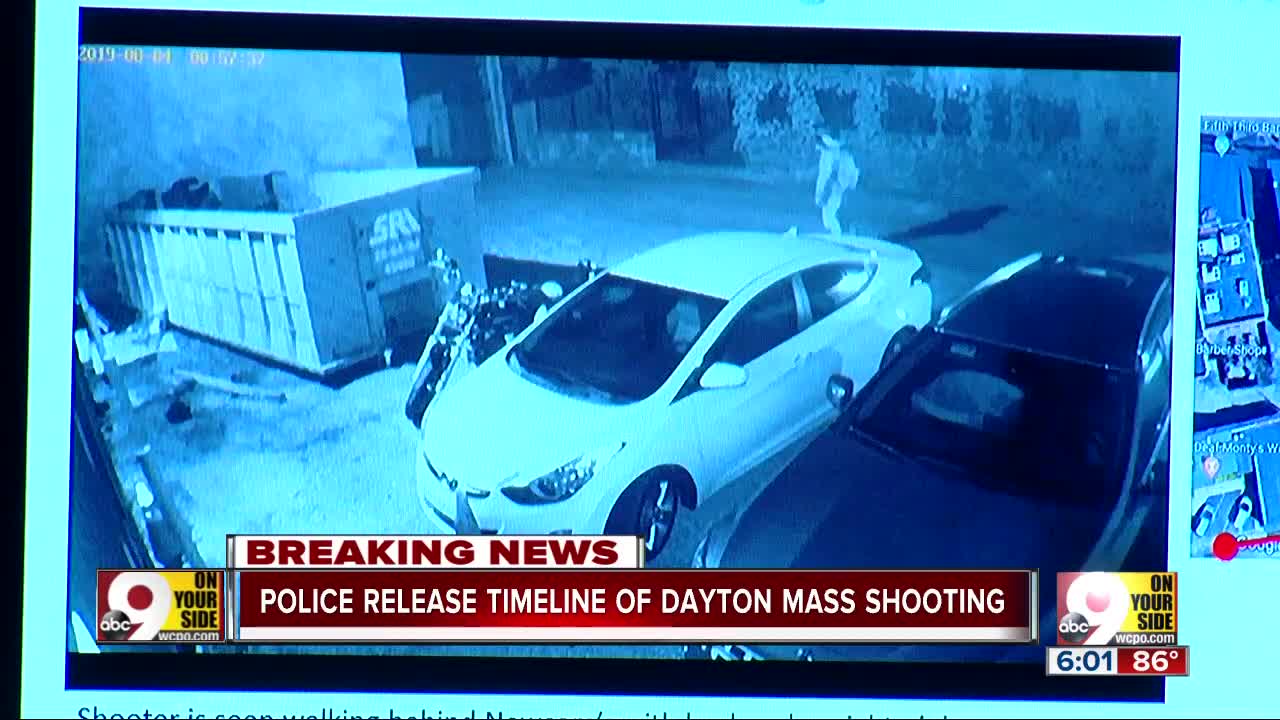 DAYTON, Ohio — Connor Betts was wearing a dark T-shirt with large white letters on the back that read "Stupidly Brutal Death Grind," the title of a song by a death metal band.

Police did not speculate on what the words meant to Betts, but they said the T-shirt helped them track Betts's movements and build a startling visual timeline of Betts's deadly Aug. 4 attack in the Oregon District.

WATCH the police presentation in the video player above. WARNING: Some people may find it disturbing.

The timeline, compiled from surveillance cameras in the area, followed Betts in the roughly 2 hours, 15 minutes when he arrived at the parking lot at 226 E. 6th St., to when he opened fire on Fifth Street, sending bar customers cowering or running for their lives, to when he was killed by police outside Ned Peppers bar after fatally shooting nine people, including his sister.

Police showed the dramatic presentation at a Tuesday news conference.

"This was part of the investigation we felt comfortable in releasing," Police Chief Richard Biehl said.

Biehl said investigators had "radically different views" as to whether Betts, 24, intentionally shot his 22-year-old sister Megan, who was among the first killed. Megan was standing under an umbrella at a taco stand on Fifth Street, police said.

Text messages show Betts knew where Megan was when he began shooting, Biehl said, but investigators were not able to determine conclusively whether he targeted his sister or not.

Biehl questioned whether Betts could have seen her when he ran around the corner and started shooting. "Could he even have seen her on the other side of the street?" the chief wondered.

"If we can’t agree in our interpretation of the evidence, where some say, ‘Absolutely not,’ and some say, ‘Had to be,’ I would says it’s inconclusive," Biehl said.

Biehl said the surveillance video confirmed, at least for him, that no others participated in the mass shooting in the entertainment district.

Here is the police timeline:

10:51 p.m. - Betts, his sister and a companion park their car and begin walking to Blind Bob's bar on Fifth Street. Betts is wearing the T-shirt and shorts and not carrying a backpack.

12:13 a.m. - Betts leaves Blind Bob's and goes to Ned Peppers. His sister and their companion stay at Blind Bob's. While they are separated, Betts makes one brief phone call to his sister, and they exchange several texts.

12:46 a.m. to 12:54 a.m. - Betts changes clothes and emerges from the parking lot wearing a black hoodie and carrying a backpack and walks back toward Fifth Street. Police point out that Betts does not interact with anyone while walking to and from the car.

12:56 a.m. to 1:05 a.m. - Cameras lose sight of Betts for approximately nine minutes behind Newcom’s bar and the Heart Mercantile building. Police speculate he is using the time to assemble his rifle.

1:05 a.m. and 35 seconds - Betts emerges from the alley and opens fire at the taco stand across Fifth Street. He kills three people there, including his sister. He walks briefly down Fifth Street, spraying bullets and killing six more.

The gunfire lasted approximately 32 seconds, Biehl said, with six police officers who had been stationed nearby engaging Betts "roughly halfway" into his attack.

Biehl announced that police had raised the count of those wounded in the attack from 14 to 17. More than a dozen others were hurt while trying to escape the gunfire.

The chief released a breakdown of the victims. He said Betts killed five men and four women and wounded six men and 11 women.

"I think that’s way, way, way downstream," Biehl said. "That’s not the level of clarity we’ll have now. We certainly don’t have it now. And whether we’ll ever have that is certainly a question.”

Biehl said Betts had been in the Oregon District Friday night and that it was clear he was familiar with the area.

Dayton Mayor Nan Whaley said she is forming a committee to create a memorial for the victims.

READ more about the attack.