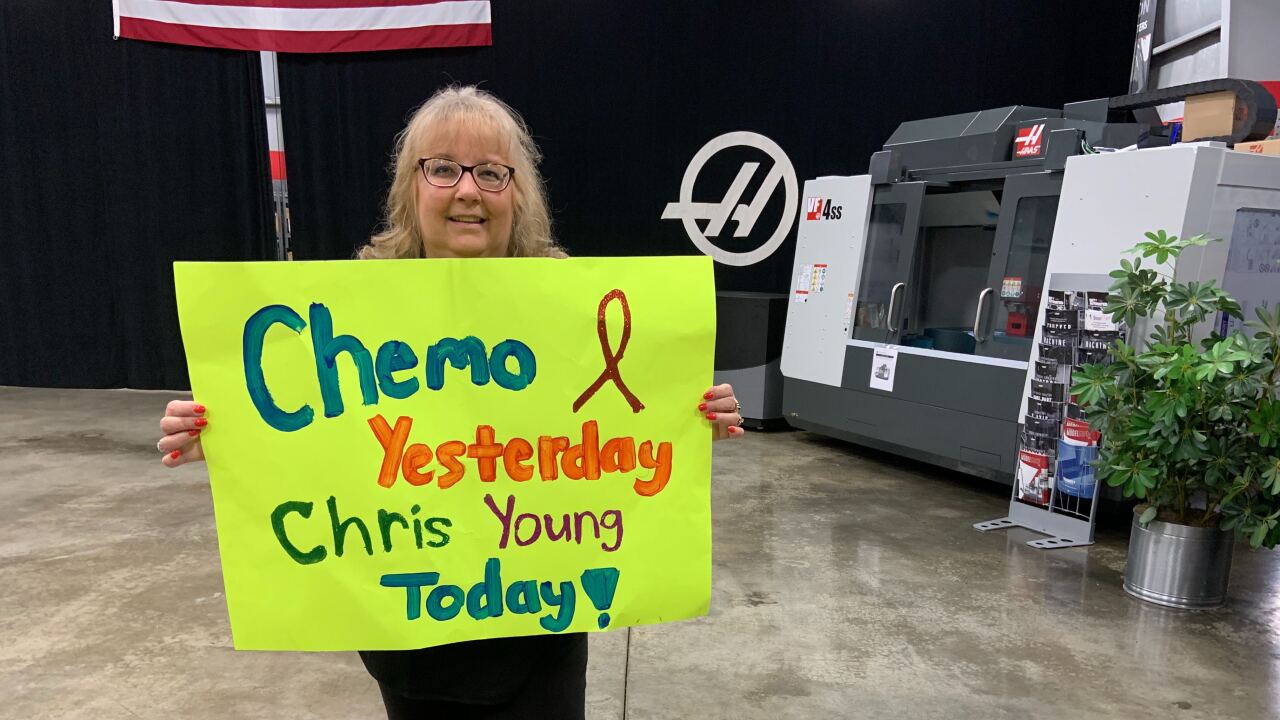 Copyright 2019 Scripps Media, Inc. All rights reserved. This material may not be published, broadcast, rewritten, or redistributed.
Whitney Miller
Donna Keith holds a sign that lead to a viral video at the Chris Young concert Saturday night in Lexington. Young noticed the sign and came in to the audience to dedicate a verse of his song to the cancer survivor.

SPRINGBORO, Ohio — Donna Keith was going through intense chemo treatment, starting off with seven-day-a-week sessions and then Monday through Friday for eight months.

She was diagnosed with leukemia in April after a bone marrow biopsy, and the daily chemo treatments helped to get her white blood cell count back up.

When her treatment finally ended on Nov. 22, she told her daughter they needed to do something special to celebrate.

“I really like Chris Young’s music," Keith said. "I listen to it all the time, and I pulled up his tour dates. They had one in Kentucky, which is just two hours from where we live. We got VIP tickets because we wanted to splurge.”

Keith’s daughter, Mandi Hoffmann, made a sign for her mom to hold up at the concert they were traveling to the day after her last chemo treatment.

I was a little hesitant at first but I said, ‘You know what, I’ll do it,’” Keith said.

Little did they know that a simple sign would lead to a life-changing moment.

The mother and daughter were seated just eight rows from the stage at the Chris Young concert at Rupp Arena in Lexington on Saturday night. Keith listened to her daughter's suggestion and held her sign up high so the singer could see it.

"From the stage you can see him point like this at me because he acknowledged that he had seen my sign," Keith said. “I was good with that. I was like, ‘Oh yay, he acknowledged it.”

But Young did much more than acknowledge it.

Captured on a video that is now going viral, thousands of fans scream as Young made his way into the stands towards Keith, singing, “Who I Am With You.” He dedicated the last verse of his song to Keith.

“It was just emotional; it was wonderful,” she said. “He hugged me for a long time.”

Moment from last night... the sign said “chemo yesterday, Chris young today”
So I went out in the audience to finish this one🙏🏻 pic.twitter.com/b7qYG2xMu1

“It made you forget what all you’ve come [through] so far, because you know cancer is not fun,” Keith said “You go through a lot and I feel like... not that it made up for it, but it was like, okay, this is my reward.”