Tornado count now up to 19 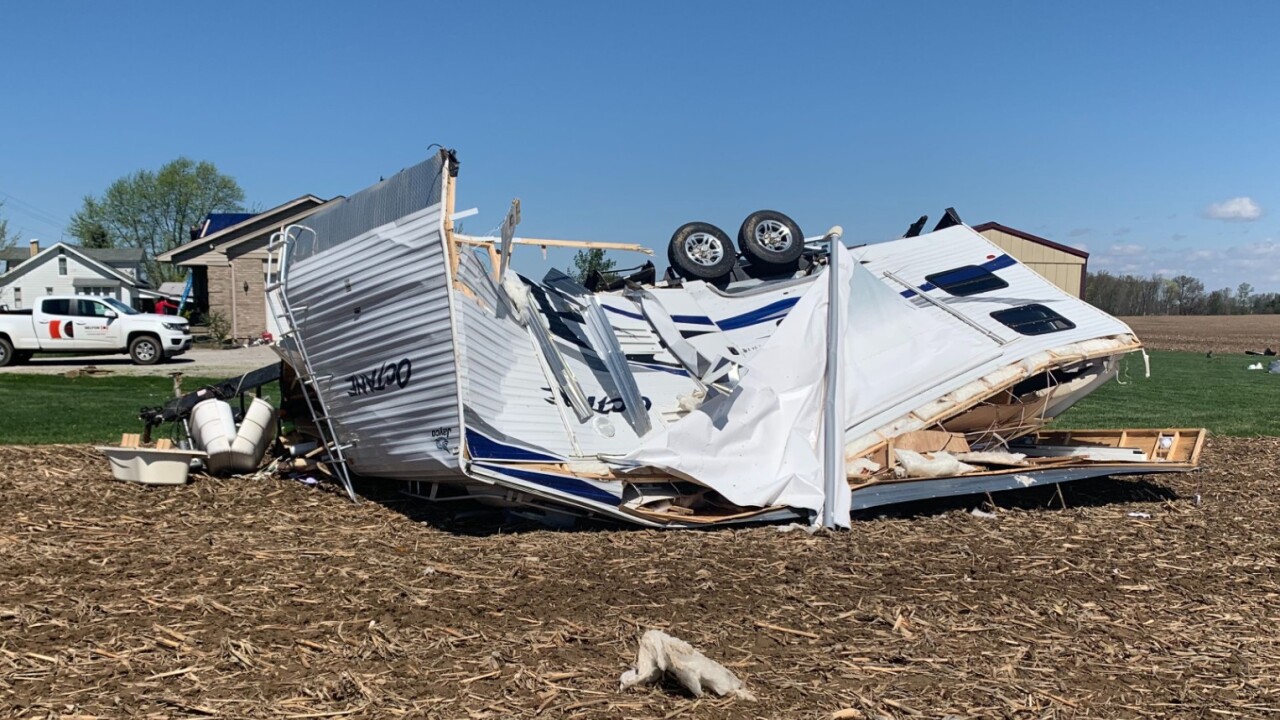 Copyright 2021 Scripps Media, Inc. All rights reserved. This material may not be published, broadcast, rewritten, or redistributed.
WCPO
Damage in Brown County from storms on April 8, 2020 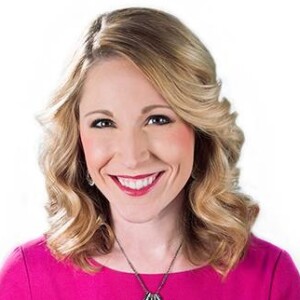 Nineteen tornadoes in one day. It's a number that makes your jaw drop and it's a record for the Cincinnati area for a single day tornado outbreak. All tornadoes were rated EF0 and EF1. There were no injuries or deaths.

1. EF0 - Lake Lorelei, OH (Brown County)
The NWS in Wilmington Ohio has confirmed an EF0 tornado near Newtonsville in Clermont County which traveled from there to near Lake Lorelei in Brown County. This statement updates the previous confirmation for the tornado near Lake Lorelei. This tornado caused tree and structural damage near Newtonsville, with wind speeds of about 70 MPH. The tornado produced additional tree and structural damage near Lake Lorelei, with wind speeds of about 80 MPH. This tornado was on the ground from 10:50 to 11:00 p.m. for 8.8 miles. It was around 200 yards wide.

2. EF0 - Edenton, OH (Clermont County)
The NWS in Wilmington Ohio has confirmed an EF0 tornado near Edenton in Clermont County, Ohio. This tornado caused tree damage on Garrison Spurling Road, and roof damage to homes on Edenton Pleasant Plain Road. This tornado was on the ground from 10:53 to 10:55 p.m. for 0.8 miles. Winds were up to 75 mph and it was around 75 yards wide.

3. EF0 - Fayetteville, OH (Brown County)
The NWS in Wilmington has confirmed an EF0 tornado southwest of Fayetteville in Brown County, Ohio. This tornado caused tree damage along its path, with some structural damage noted to a property on State Route 131. The tornado was on the ground from 10:56 to 10:59 p.m. for 2.4 miles. It had winds up to 75 mph and was around 50 yards wide.

7. EF0 - Mount Olivet, KY (Robertson County)
A brief tornado touched down north of Mt. Olivet and damaged structures along Highway 165 north of town. It traveled east across Brierly Ridge Road. Tree damage was also seen along the path. The NWS greatly appreciates support and assistance from Robertson County Emergency Management with these findings. The EF0 tornado was on the ground for one mile from 11:16 to 11:17 p.m. Winds were up to 85 mph and it was up to 50 yards wide.

8. EF0 - Mays Lick, KY (Mason County)
A brief tornado touched down southwest of Mays Lick and damaged structures and trees along its path. The damage was mostly found along, and north of, Raymond Road, a;so known as Highway 324. The NWS greatly appreciates support and assistance from Mason County Emergency Management with these findings. The tornado was on the ground from 11:25 to 11:26 p.m. for 1.2 miles. It had winds up to 80 mph and was up to 50 yards wide.

9. EF1 - Versailles, IN (Ripley County)
A brief tornado touched down on the southwest side of Versailles, damaging homes, businesses and trees along its path. Ground and aerial photos confirmed a debris pattern and placement associated with a tornado. Damage further west between Versailles and Holton was more indicative of straight line wind damage. The EF1 tornado was on the ground from 9:59 to 10:01 p.m. with 86 mph winds for 2.5 miles. It was up to 450 yards wide.

10. EF0 - Near Versailles to near Friendship, IN (Ripley County)
A tornado touched down along South Friendship Road in southeast Ripley County. The tornado caused roof and siding damage to homes and barns, as well as destroyed some silos, along with some tree damage. The tornado was on the ground from 10:08 to 10:11 p.m. for 2.6 miles. It was up to 220 yards wide with 70 mph winds.

11. EF1 - Falmouth, KY (Pendleton County)
A tornado affected portions of southern Pendleton County, Kentucky, south of Falmouth. The first evidence of tornado damage occurred along Hogg Ridge Road. The tornado moved east-southeast, producing damage along its path that impacted West State Highway 22, Morgan 4 Oaks Road, Liberty Ridge Road, US 27, and McKinneysburg Road. Damage included the destruction of several barns, numerous trees and power poles. The end of the damage occurred along Milford Road, where debris from a destroyed barn was thrown into an adjacent field. Based on the damage, this tornado produced winds of around 100 mph, and is rated EF-1.

12. EF0 - Dillsboro, IN (Ohio County)
A tornado touched down along Milton Bear Branch Road in western Ohio County. The tornado traveled east-southeast until lifting off near the 6000 block of Palmer Road. There was a lot of damage to roofs, siding, barns and trees. Damage of this nature is consistent with that of an EF0 tornado, with winds topping out at about 70-75 mph. This tornado was on the ground for 5.8 miles from 10:13 to 10:17 p.m. It was up to 450 yards wide.

13. EF0 - Rising Sun, IN (Ohio County)
A tornado touched down along the 7300 block of Salem Ridge Road and stretched 5.25 miles to the east near Rising Sun. Damage along this path was weaker than the tornado in western Ohio County, with damage becoming more diffuse and sparse as the storm headed east. Damage to roofs, siding and power poles and trees occurred. This tornado was on the ground for 5.25 miles from 10:18 to 10:22 p.m. It was around 200 yards wide with 65 mph winds.

14. EF0 - Mount Healthy, OH (Hamilton County)
An EF0 tornado affected a path of approximately 6.2 miles in central Hamilton County, impacting the Mt. Healthy area, as well as places to the west and east, in the evening. The tornado began in Colerain Township near Colerain Avenue, where trees were reported down, along with minor damage to the YMCA Play Time Early Learning Center. The tornado continued east along, or just north of, Compton Road, uprooting trees. Further east, the tornado continued to produce tree damage and minor structure damage on Ranchill Drive, before moving into the center of Mt. Healthy. Numerous downed trees, leaning or broken transmission poles and damage to several buildings marked the path of the tornado through Mt. Healthy following Compton Road. Tree and transmission pole damage continued east out of Mt. Healthy into Springfield Township. The tornado may have briefly become less organized before causing additional light-structure damage and extensive tree damage from Winton Road through Hill Top Acres. Damage decreased quickly around Ridgeview Drive, with the last sign of tornado damage on Compton Road. The large number of snapped and uprooted trees with little to no leaves, snapped or leaning transmission poles, and minor structure damage lead to a rating of EF-0 with winds around 85 mph.

15. EF0 - Indian Hill, OH (Hamilton County)
A tornado affected a path of approximately 3.3 miles in eastern Hamilton County, impacting the Indian Hill area, in the evening. The tornado began along Keller Road, and continued southeast to the 8000 block of Blome Road, where trees were reported down. Numerous trees were also knocked down at the intersection of Drake Road and Camargo Road. As the tornado moved southeast, it is possible it briefly lifted before producing additional damage along properties on Given Road. Damage to trees and barns was observed, in addition to downed power poles on Given Road, just north of the intersection with Shawnee Run Road. Additional tree damage was noted on Alberly Road. This tornado is believed to have dissipated along Park Road, where a few trees were downed. Based on the damage, the tornado produced winds of around 85 mph, and is rated EF-0.

16. EF0 - SE of Cross Plains, IN (Ohio County)
A brief tornado touched down in far southwest Ohio County, about 5 miles east-southeast of Cross Plains, in the 1600 block of Aberdeen Road. The tornado destroyed a barn and produced siding and roof damage, as well as rolled two recreational vehicles over and toppled trees. This tornado was on the ground for 250 yards, was 60 yards wide and had 70 mph winds from 10:11-10:12 p.m.

17. EF0 - Cross Plains, IN (Ripley County)
A brief tornado touched down in southeast Ripley County in Cross Plains. The tornado damaged trees as well as caused roof damage to homes and businesses. Based on the degree of damage, the tornado produced winds of around 65 mph, and is rated an EF-0. It was only on the ground for 350 yards and around one minute from 10:06 to 10:07 p.m.

18. EF0 - SW of Dillsboro, IN (Dearborn County)
A brief tornado touched down in southwest Dearborn County in the 8800 block of Davies Road. The tornado continued to travel southeast, destroying barns and damaging roofs and trees for about one mile from about 10:10 to 10:12 PM.

19. EF0 - Bracht, KY (Kenton County)
A brief tornado touched down in southwest Kenton County near Bracht, near the intersection of Dixie Highway/Route 25 and County Road 14/Bracht-Piner Road. The tornado traveled east, causing barn, siding, tree and power pole damage for just over one mile from about 10:42 to 10:43 PM.

This now eclipses the prior record of 16 tornadoes in one day from the 1974 super outbreak. But to put some perspective on it, that system had much stronger tornadoes that resulted in more profound damage and loss of life here in the Tri-State.