More schools are choosing therapy dogs, even with an uncertain school year ahead 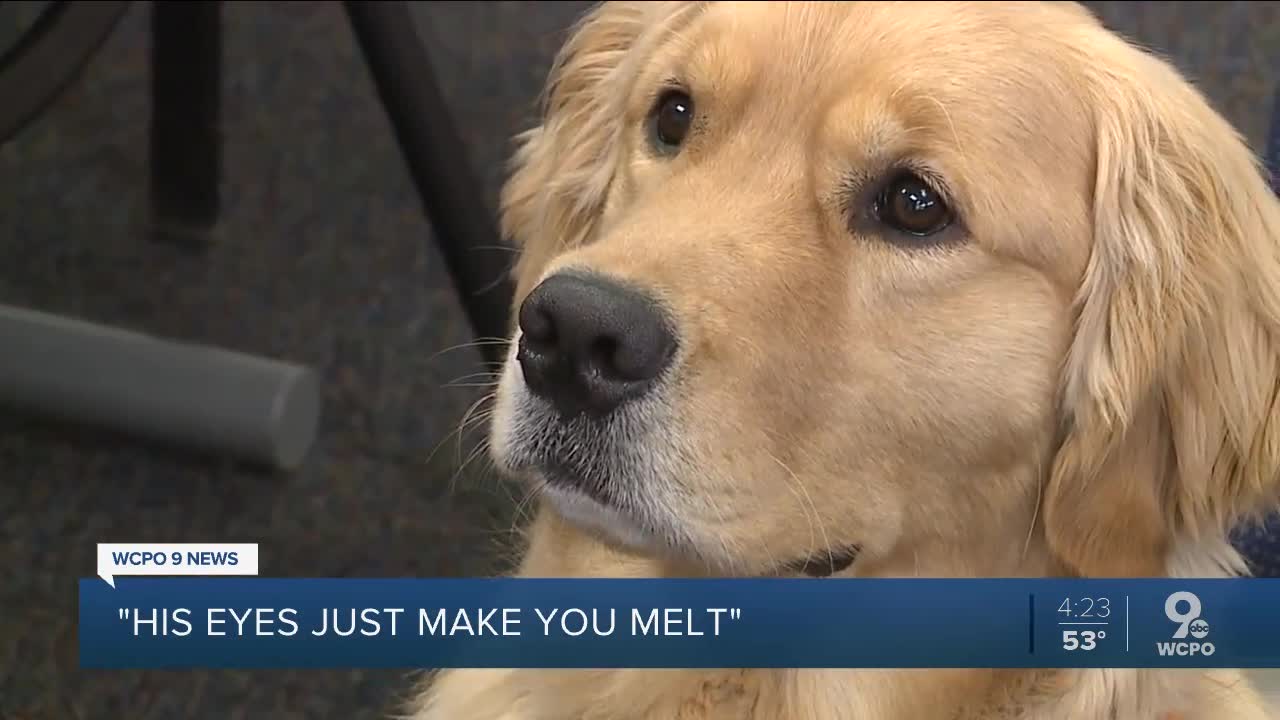 Prior to coronavirus-related closures, WCPO set out to see why more schools were adding therapy dogs and how they were trained.

CINCINNATI — The pilot program putting fuzzy, four-legged counselors in Hamilton County schools is in talks with "several" other schools about expanding the program for the 2020-2021 school year, despite uncertainty about in-person instruction in the fall.

Currently, the Hamilton County Education Service Center and Circle Tail have placed six therapy dogs in schools, where they work as interns until the school decides to pick up the bill by hiring the dog.

Golden retriever Zooey has a regular spot in the Lakota Schools newsletter and an email address that students can write to for advice. She gives them tips to stay calm and healthy, according to the HCESC.

A pup named Cyngi makes regular Zoom appearances for students in HCESC's Pathways to Employment program. She's practicing manners and service skills and working on a video to show students how she is adapting to her "new normal."

Days before schools started the shift to remote learning because of the COVID-19 pandemic, WCPO wanted to learn more about the pilot program and the training behind it.

'He leans into you and his eyes just make you melt'

Evan started his training like all the others do — down a gravel road in rural Warren County.

Circle Tail in Pleasant Plain was established in 1997. Executive director Marlys Staley left a life as a physical therapist to start the organization.

"What I've learned is, you never know everything," Staley told WCPO. "Dogs are as individual as people, even within a litter. You have to always work with the dog in front of you. There's no 'cookbook' dog training."

Evan was a little different from the get-go.

"He is so beautiful and he just lights up the room when you see him," said volunteer Leslie Kreines. "He has this 'Evan smile.' He has a way of lifting his head back and putting on this beautiful smile that just makes everyone want to come to him."

Kreines coordinates Circle Tail's partnership with the HCESC to place dogs in schools, which began in January. Circle Tail sponsors the dog by paying for everything, including food and crates.

"What we're seeing in the schools now is obviously the stress level," Kreines said. "What we're finding is how magical these dogs are."

'I'll be able to conquer this, no matter what anybody tells me'

Back when schools were still open, St. Xavier senior Alex Nielsen spent time with Evan every day. They've been pals since the golden retriever started walking the halls in Finneytown.

"I see him every day. I have a streak with him — I call it a streak, at least," Nielsen said.

But Evan almost wasn't hired for the job.

"At first, I was a little skeptical," assistant principal Jason Ahlers told WCPO. "You hear of people just sort of putting a therapy vest on a dog and saying, 'We have a therapy dog.'"

That was until he met the folks at Circle Tail and talked to the Hamilton County ESC.

"We read the data, we saw studies that talk about how a therapy dog can help someone in crisis calm down more quickly," Ahlers said.

Much of that research forms a scientific, physiological argument in favor of the "paws-itive" effects of a therapy dog in the classroom.

Evan mostly stays in St. Xavier's counseling offices, but there's no research needed to see the effect he has had on the Bombers.

"I think dogs are able to just access everyone's emotions, no matter what they are," Nielsen said.

Sisters Drew and Meg — named after Barrymore and Ryan — were 9 weeks old when we met them. They spend their time in a play room with different toys and surfaces.

"They stay here until at least four months or so, and then they'll rotate into our prison program and then come out and rotate into a foster family," Staley said. "Eventually around one year of age, they start doing some of their service and therapy skills."

Circle Tail started its prison program in 1998 and now works in the Ohio Reformatory for Women and the Dayton Correctional Institute.

Evan started on his training track to be a service dog helping those with special needs. But when he began visiting the Ohio Reformatory for Women, it became clear that his talents were more intuitive.

"He almost would sense which people needed him," Staley said. "The ladies would walk him around the prison and there was a woman off to the side crying, and he stopped and wouldn't go with his handler, like 'Nope, we've got to go check her out.'"

Circle Tail's service dogs are well-rounded — they can open doors and drawers and turn light switches on and off, among other things.

But Evan was clearly best suited for therapy work.

"When you're doing some of the training, they're like, 'Seriously, you've already dropped that pen twice, you can get it yourself,'" Staley said. "Their work ethic is not like some of the labs that are just always ready to do stuff for you."

It's not just work ethic. A therapy dog also has to have superior social skills.

Walk the halls of St. Xavier High School (whenever it is safe for students and their golden guidance counselor to return) and you'll see Evan's appeal.

"His innate ability of empathy is just incredible," Krienes said.

"(Evan) just makes me know that I'm able to get through things — social or grade-wise or a problem with a teacher," said Nielsen. If the dog had been at St. X all four years, he added, "it would have made high school so much better."