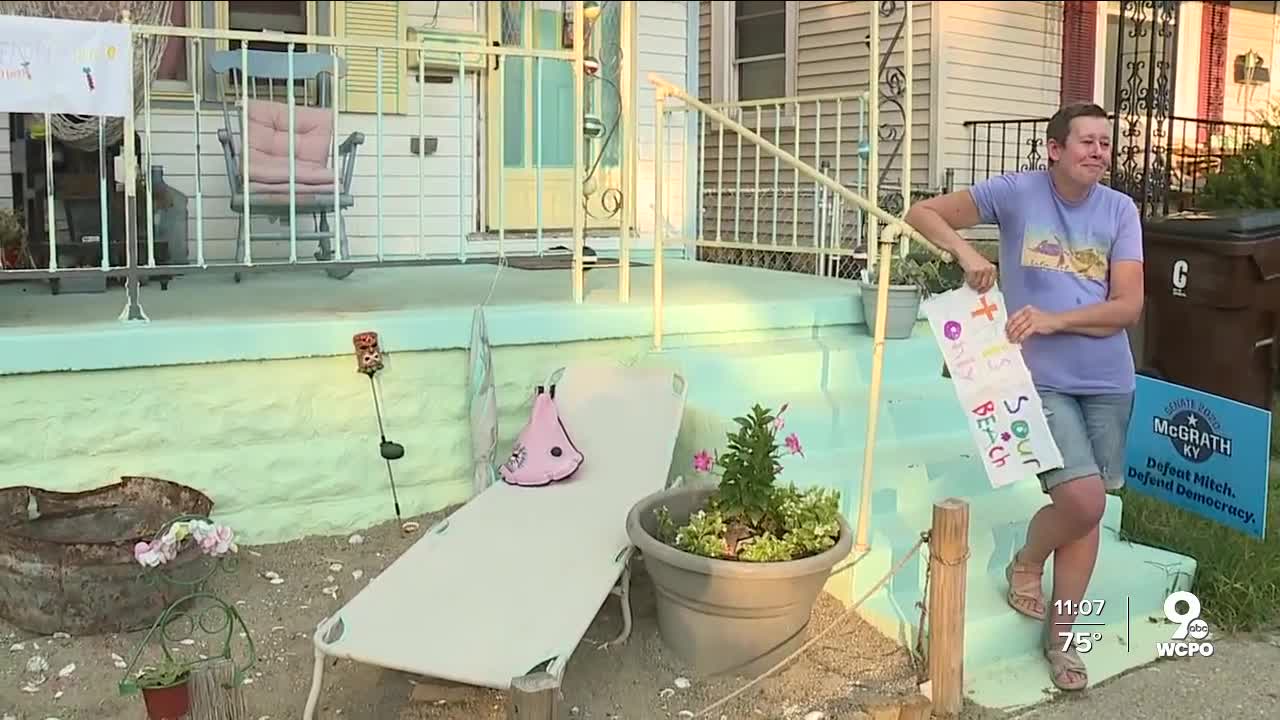 From one neighbor to another – a Latonia man is speaking up for his neighbor who’s been fighting breast cancer after the City of Covington gave her 15 days to take down some yard decorations.

COVINGTON, Ky. — From one neighbor to another, a Latonia man is speaking up for his neighbor who’s been fighting breast cancer after the City of Covington gave her 15 days to take down some yard decorations.

“This battle that she is already fighting for her life, I didn’t want her to have to fight the city, too,” William Stone said.

His neighbor Carman Lake said her beach-themed front porch is her oasis. The sea shells are from her travels to the Bahamas, Haiti and Puerto Rico. They’re a reminder of the water she hasn’t been able to get to while recovering from double mastectomy surgery in June.

She calls her home "The Lake House." Her front porch is decked out with sand, sea shells and beach chairs. Lake said she started decorating the scene after she was diagnosed with cancer and she’s been using the area as an escape during the day.

“It was also the one bright spot of my day to come out here and the kids would be in bed and I could just get in my rocking chair, cover up with my throw and read a book,” Lake said.

A peaceful retreat she said that was made by the community.

“Each surgery I would come home and there would be more decorations, from neighbors friends and family,” Lake said.

Her bright spot was darkened when she got a notice from the city that said someone had complained and her beach scene was deemed a nuisance.

“We sent the property owner a warning, a notice that she would have a general nuisance and that we would want to have her clean that up,” said City of Covington Director of Neighborhood Services Ken Smith.

He said code officers didn’t know Lake’s medical condition when they delivered the notice. Smith said the warning is usually the start of a conversation to find a solution.

“We try to make reasonable accommodations to work with our citizens to get compliance with our code,” Smith said. “Ultimately we are not looking to be punitive. We just want to make sure our properties are maintained in a way that adds value.”

Lake said it was too much to deal with all at once.

“They were temporary decorations; they were never meant to be permanent,” she said.

Lake plans to talk to city officials Tuesday at the council meeting to see exactly what can stay and what has to go.

Smith said the city encourages anyone who gets a warning or code violation notice to reach out to them if they have a situation that is preventing them from fixing the issue.

A Facebook group called Save the Lake House is telling Lake's story and rallying the support of other community members.