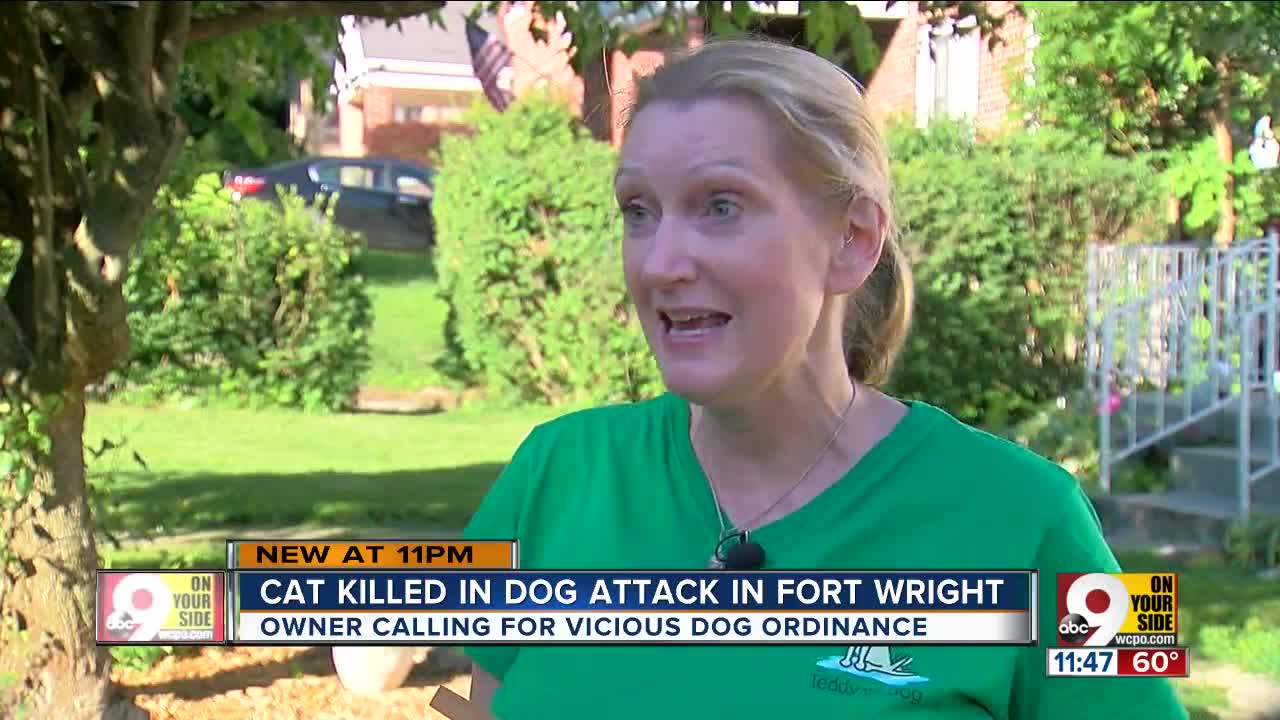 Whitney O’Neal knew her 7-year-old cat was dead the moment the neighbor’s dog closed his jaws around her. Now, O'Neal wants a vicious pet ordinance to protect other animals (and potentially people) in her city. FORT WRIGHT, Ky. — Whitney O’Neal knew her 7-year-old cat was dead the moment the neighbor’s dog closed his jaws around her.

“It was awful, awful,” O’Neal said Monday night. “I mean, absolutely traumatic to the core.”

The dog, a Rottweiler-Dobermann mix, had broken free from the grip of a child who had been watching it. The neighbors, who declined to speak on camera, acknowledged Monday that their dog had killed O’Neal’s cat, Chloe, after being pulled away from an attack on her German shepherd.

However, they insisted he was not typically aggressive.

O’Neal disagreed. She said she wants Fort Wright to implement a vicious animal ordinance to save other pets and (potentially) people. It's been a month since the attack, she added.

An ordinance like the kind she proposed would allow authorities to act more quickly after an attack and to remove an aggressive animal from the area in which it occurred. She does not support euthanasia, she said, but wants measures in place to protect people and animals in her community.

“All the areas surrounding us, something would have happened,” she said. “But not here.”

Sarah Hightchew, who works for the Kenton County Animal Shelter, explained investigations into cases like Chloe’s are complicated. Different communities have different ordinances establishing when and how action should be taken to protect a neighborhood from a vicious pet. (And what does “vicious” mean, exactly, from a legal standpoint? It varies.) Even when ordinances are clear-cut and facilitate a quick removal, investigating alleged incidents takes time.

“We’ll go ahead and collection all information we can and then pass that along (to the court), and then they ultimately make that final call of what exactly is vicious and if that animal will be deemed vicious in a court of law here,” she said.

O’Neal’s case remained under investigation by Monday night, meaning authorities had not officially determined who was responsible for the attack or the cat’s death.

“If Fort Wright does what is right, then hopefully she will not have died in vain,” she said.