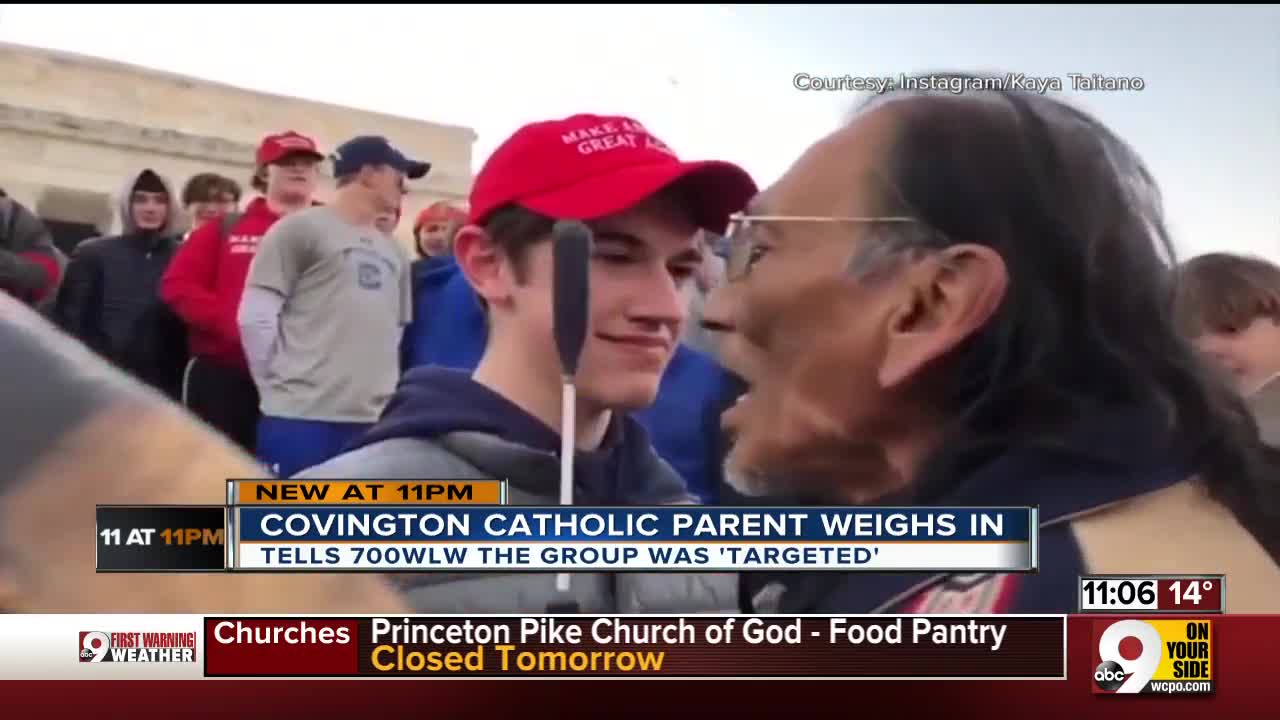 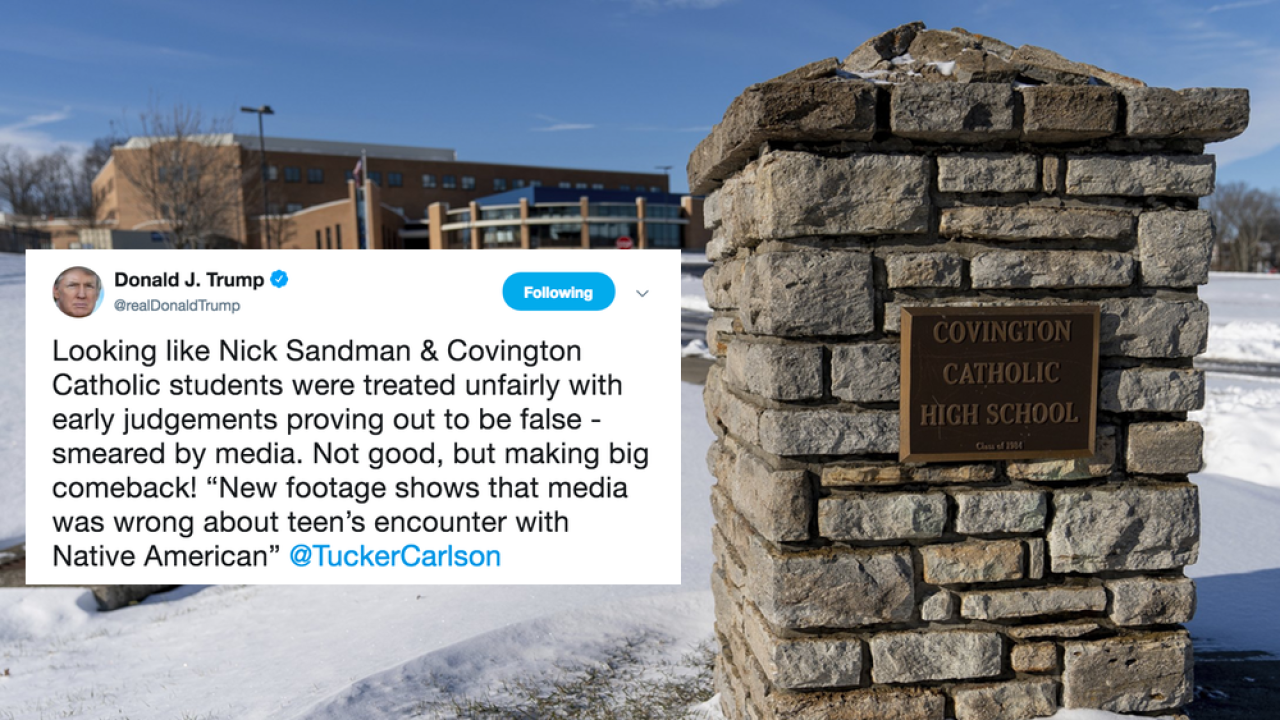 A group of five black men shouting vulgar, racial insults while protesting centuries of oppression. Dozens of white Catholic high school students visiting Washington for a rally to end abortion. And Native Americans marching to end injustice for indigenous peoples across the globe who have seen their lands overrun by outside settlers.

President Donald Trump offered his own interpretation on Twitter, taking a shot at a familiar target:

“Looking like Nick Sandman & Covington Catholic students were treated unfairly with early judgements proving out to be false — smeared by media,” he tweeted, misspelling the name of a student who became a central figure in the ensuing online drama. “Not good, but making big comeback!”

At first, over the weekend, the focus was on a short video showing Covington Catholic High School student Nick Sandmann wearing a red “Make America Great Again” hat and appearing to smirk while a crowd of other teens laughed derisively behind him as a 64-year-old Native American, Nathan Phillips, played a traditional chant on a drum.

Pull back further and a different view emerged, however, in a separate video showing members of a group calling itself the Black Hebrew Israelites taunting everyone on the mall that day, calling the Native Americans who had gathered there for the Indigenous Peoples March “Uncle Tomahawks” and ”$5 Indians” and the high school students “crackers” and worse. (The organization is considered a hate group by the Southern Poverty Law Center, which studies extremism in the United States.)

"Before you started worshipping totem poles, you was worshipping the true and living God,” one Black Hebrew Israelite shouts to nearby natives in the video. “This is the reason why this land was taken away from you, because you worshipped everything except the Most High.”

It was an ugly encounter of spewed epithets but one that nevertheless ended with no punches thrown or other violence.

Still, the videos were all over social media, again appearing to illustrate a nation of such deep divisions — racial, religious and ideological — that no one was willing to listen to the others’ point of view. Add to that the political tensions spilling over from a government shutdown that has gone on for a month and the stage was set for a viral moment. But in this case it didn’t tell the whole story, all the parties involved agree.

“I would caution everyone passing judgment based on a few seconds of video to watch the longer video clips that are on the internet, as they show a much different story than is being portrayed by people with agendas,” Sandmann, a junior, said in a statement released late Sunday.

Sandmann’s statement does seem at odds with some video from the confrontation that showed students from his school laughing at Phillips’ Native American group and mockingly singing along with him, as well as interviews with Phillips, who said he heard the students shout “Build that wall!” and “Go back to the reservation!”

The fullest view of what happened that Friday afternoon came from a nearly two-hour video posted on Facebook by Shar Yaqataz Banyamyan. It showed members of his Black Hebrew Israelite group repeatedly interacting with the crowd as people from the Indigenous Peoples March and the high school students vigorously argued with them for a few minutes.

Sandmann said in his statement the students from his all-male school were waiting for their buses near Banyamyan’s group when the latter started to taunt them. One of the students took off his shirt and the teens started to do a haka — a war dance of New Zealand’s indigenous Maori culture, made famous by the country’s national rugby team.

Phillips, an elder of the Omaha tribe, and Marcus Frejo, a member of the Pawnee and Seminole tribes, said they felt the students were mocking the dance and walked over to intervene.

Phillips and Sandmann locked eyes, their faces inches apart. Both men said their goal was simply to make sure things didn’t get out of hand. But caught on video, the encounter still went viral.

The high school students felt they were unfairly portrayed as villains in a situation where they say they were not the provocateurs.

“I am being called every name in the book, including a racist, and I will not stand for this mob-like character assassination,” Sandmann said in his statement.

The Roman Catholic Diocese of Covington apologized for the incident, promising an investigation that could lead to punishment up to expulsion if any wrongdoing by the students was determined.

The Indigenous Peoples Movement felt the encounter was a reminder the U.S. was founded on racism and President Donald Trump’s presidency is rekindling hatred based on skin color.

“Trump has riled up a reactionary voting block that reminds us that we are a nation founded on patriarchy, genocide and racism. Trump is clearly giving these archaic instincts license, encouraging the kind of aggressive goading that I witnessed,” movement spokesman Chase Iron Eyes said in a statement.

Trump himself weighed in with a tweet Monday night as some news reports questioned whether the early criticism of the students was warranted. The president tweeted, in part: “Looking like Nick Sandman & Covington Catholic students were treated unfairly with early judgements proving out to be false - smeared by media. Not good, but making big comeback!”

Banyamyan posted his own reaction on Facebook, referencing the dozens of high school students in their Make America Great Again gear coming over to his group of five and chanting. In a rambling video, he also praised Phillips and compared Sandmann to the devil.

After the sun set and the Covington high school students left, Banyamyan’s video showed a few police officers stopping by to check on his group as they were wrapping up their protest. One of the officers said they were worried by the number of people that briefly massed in that one spot. One of the Black Hebrew Israelites said there were no problems.

“We weren’t threatened by them,” he said. “It was an OK dialogue.”