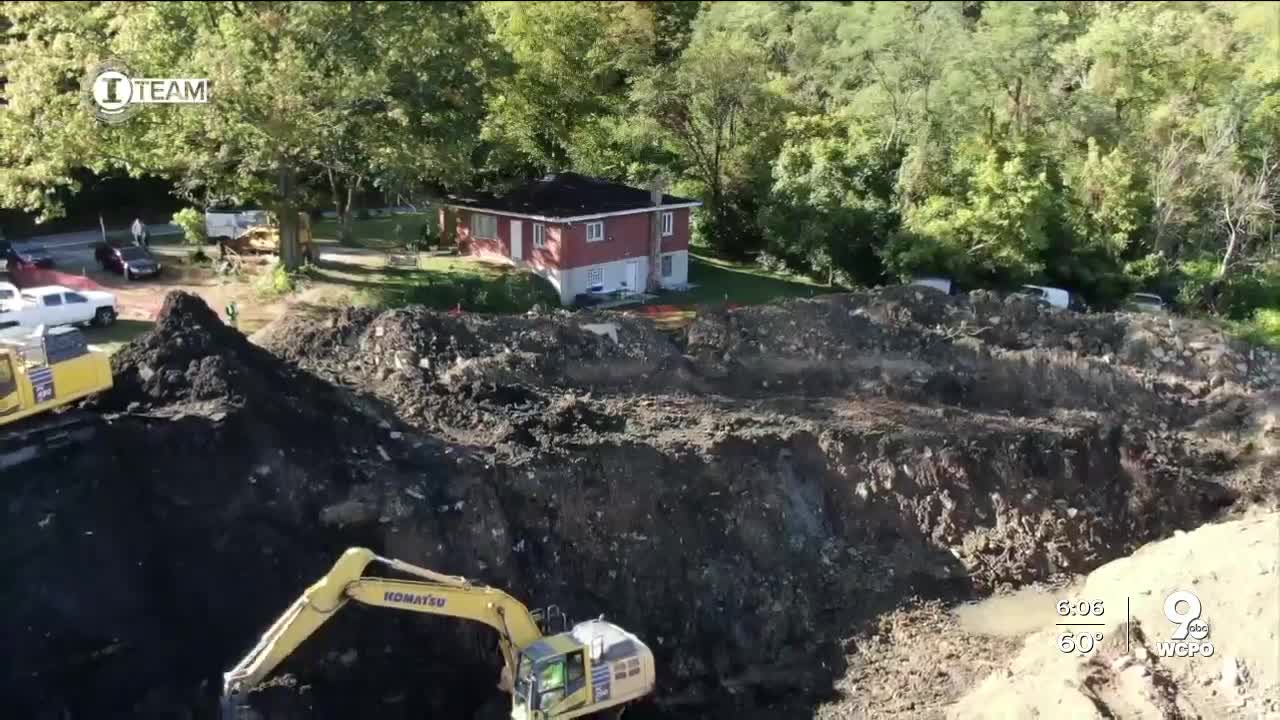 A massive cleanup of thousands of tons of contaminated MSD waste is underway on a residential riverfront property in Villa Hills. David and Cindy Bell said MSD contractor Kokosing Industrial had promised to deliver 'clean' dirt. The cleanup agreement resulted from a lawsuit the Bells filed in 2019. VILLA HILLS, Ky. — Cindy and David Bell hoped to create a beautiful retreat for their family and friends on their one-acre riverfront lot.

But a massive crater, which appears to be 30 feet deep and 100 feet wide, has replaced part of the Bells' scenic lot in Villa Hills.

"We wanted to build a place where we could have a good life," Cindy Bell said in an Oct. 1 interview.

Then, she pointed to a large pile of black dirt and fill material that construction workers were removing from their property.

The Bells received the material in 2017. The I-Team first reported they filed a lawsuit in 2019.

They had a contract with Kokosing Industrial for tons of free "clean" fill dirt and uncontaminated material that was delivered and buried on the Villa Hills property.

However, Kokosing Industrial, a contractor for the Metropolitan Sewer District (MSD) of Greater Cincinnati's Lick Run sewer project on the city's West Side, brought the Bells material that contained contaminated waste, according to tests that were later conducted.

Kokosing didn't know the material was contaminated when it was delivered to the Bells, according to court records filed by the company and written statements Kokosing provided to the WCPO 9 I-Team.

"I just feel like they took my life, and I've been in limbo for the three years that this has been here," Cindy Bell said.

Court records show Kentucky state regulators determined in March 2018 that the contamination on the Bell's property "posed an imminent threat to human health and the environment."

The Kentucky Division of Waste Management Superfund Branch demanded that the Bells, Kokosing and MSD submit a cleanup plan.

"The bulk of the black fill materials were placed over an approximate 16,000 square-feet area" on the Bells' property, according to ATC's Corrective Action Plan.

The contaminated black fill was up to 25 feet thick in one area of the Bells' land, according to the Corrective Action Plan.

The Kentucky Division of Waste Management approved the plan, but the Bells objected to it because they said it didn't require cleaning up all contaminated fill material and restricted how they can use the land after the cleanup, according to court records.

Finally, on Sept. 14, the cleanup began, according to a statement from Kokosing.

"It's worthwhile to understand that it's taken a lot of time and effort and energy to get us to this place," said attorney Jeffrey Sanders, who represents the Bells.

The agreement requires workers to grade the replacement material into a "gently sloped" and usable area.

Then, the workers will cover it with three feet of soil and top soil and plant 10 hardwood trees, according to the agreement.

"It feels really good that it's happening," said David Bell. "Somebody is looking out for us."

In a statement to the WCPO 9 I-Team, Kokosing blamed MSD's environmental consultant - ATC Group Services - for not identifying the material as contaminated.

"ATC has no comment with regard to the litigation as ATC’s motion to dismiss was granted and it is no longer involved in the suit," wrote Karlene Barron, Director of Communications for Atlas. "The Court found that ATC did not become involved in the Bells’ affairs until after the Bells’ injuries occurred."

In response to a series of written questions from the I-Team, MSD spokeswoman Deb Leonard wrote "Kokosing delivered material to the Bells’ property without MSD’s knowledge or authorization. MSD did not pay for the disposal of any material on the Bells’ property."

In an email to the I-Team on Monday, Kokosing VP Spencer Beeching wrote "costs are not yet confirmed. Kokosing is fixing the problem and will seek reimbursement from the responsible" parties.

The Bells said they became concerned about what was in the material in the fall of 2017 because some of it smelled like petroleum.

But, according to Cindy Bell, Kokosing insisted the material was just "city dirt."

"I think they thought we would dry up and go away," Cindy Bell said.

In December 2017, Kentucky environmental regulators conducted tests on samples of soil removed from the Bells' property, according to state records.

Those tests showed the soil from the Bells' property contained levels of certain compounds the Environmental Protection Agency considers excessive for residential property, according to an investigation report by Kentucky's Division of Waste Management.

The investigation report focused on PAHs, also known as polyaromatic hydrocarbons. Some PAHs have been identified by the EPA as possible human carcinogens, although it's unclear how much of a health risk the Bells face from the contamination.

The violation notices required the Bells, Kokosing and MSD to install a silt fence at the base of the Bells' property to try to keep the contaminated soil from spreading or getting into the Ohio River, the primary source of drinking water for residents in the Tri-State.

In the Bells' lawsuit, U.S. District Judge David Bunning dismissed their claims against MSD, ATC Group Services, the city of Cincinnati, which manages MSD, and a sub contractor.

In response to the I-Team's written questions, MSD spokeswoman Deb Leonard wrote that "MSD worked in collaboration with Kokosing and the Kentucky Department for Environmental Protection (KDEP) to develop a cleanup plan for the safe removal and disposal of the material that was placed on the Bells' property. Kokosing is now implementing that cleanup plan, and MSD has not agreed to pay any costs."

Bunning did not dismiss the Bells' claims that Kokosing committed fraud and breached its contract with the Bells, who are also pursuing damages against Kokosing.

In an email to the I-Team, Kokosing vice president Spencer Beeching said the company "did not defraud the Bells and the court has not ruled otherwise."

"The judge was ruling on a motion to dismiss -- an early motion in which the court is required to accept the Bells’ allegations as true, before considering any evidence that will be presented by Kokosing," Beeching said in the email.

The schedule for the Bells' lawsuit stretches into 2021.

The cleanup and restoration of their property could be finished by December.

"This is where I grew up," Cindy Bell said.

"This was my forever place. Now, I'm not so sure."