Cleanup of riverfront property is on hold 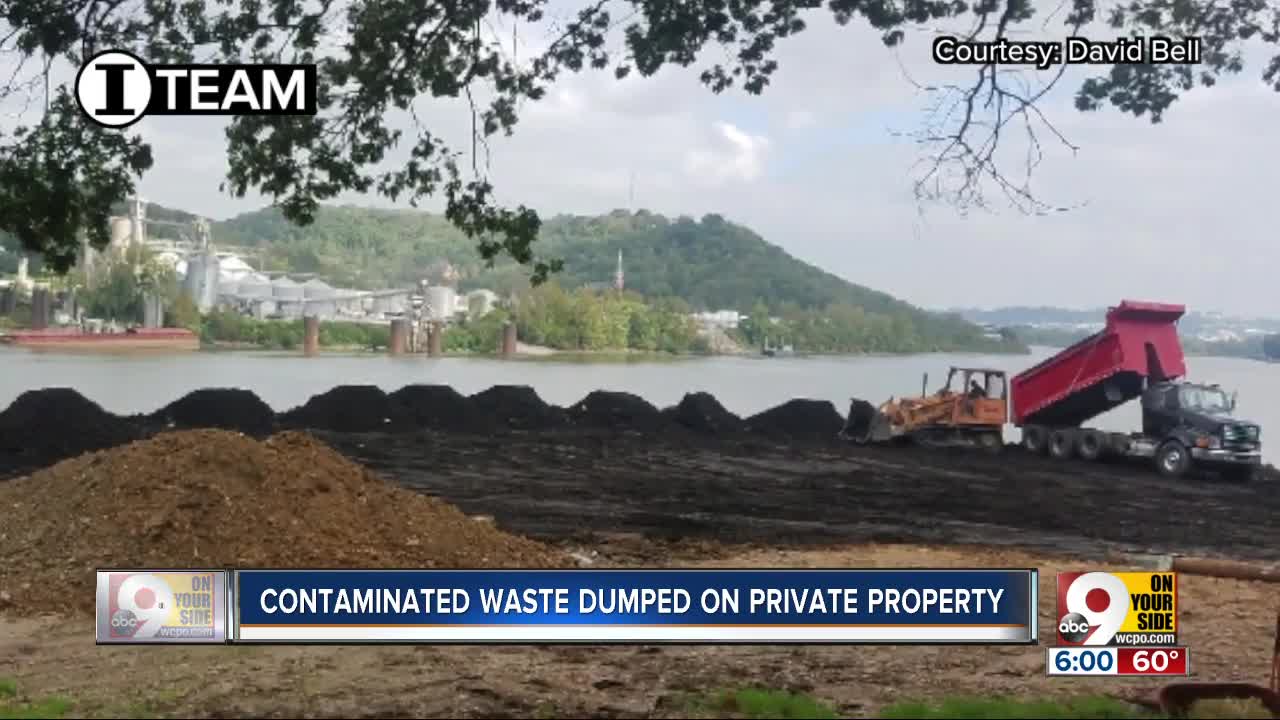 When a contractor offered to fill the Bells' land for free, they said yes. But the offer may have been too good to be true. 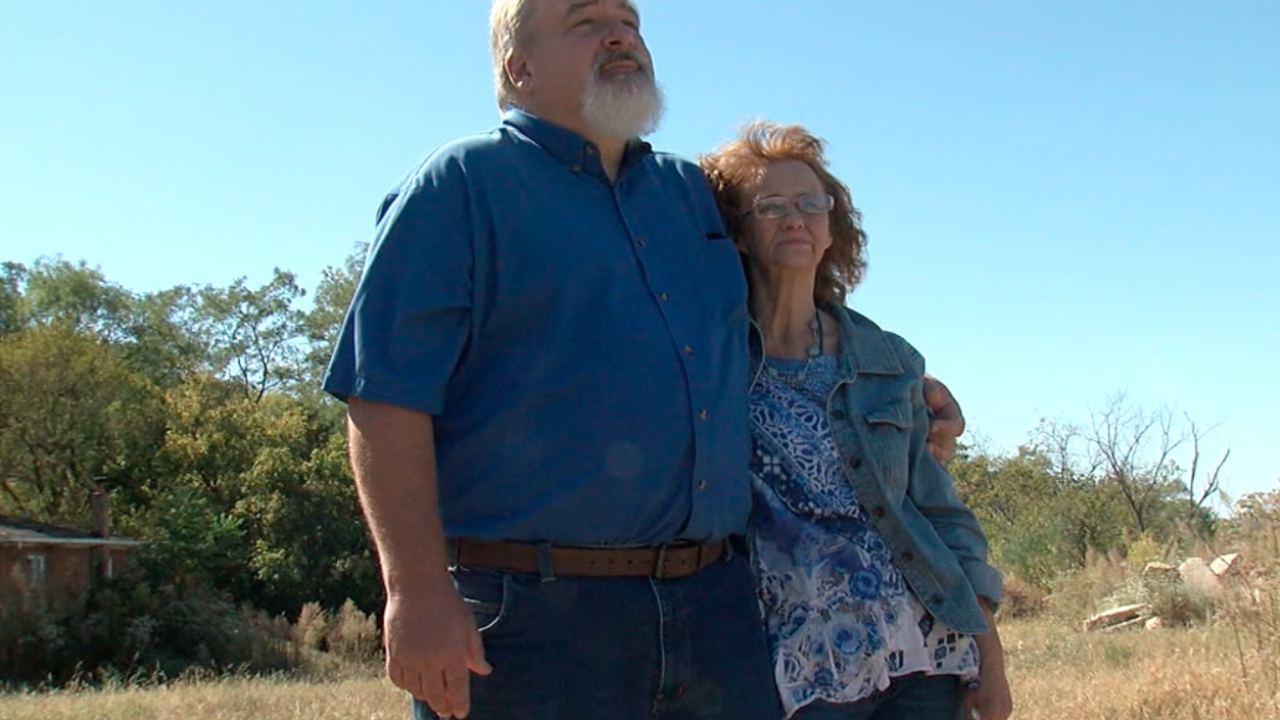 VILLA HILLS, Ky. — On a warm day in October, David and Wendy Bell stood near the edge of their Villa Hills property overlooking the Ohio River and marveled at the view.

"We're getting old," Wendy said. "This was going to be our forever place to live for the rest of our lives."

The Bells wanted to create a small campground and organic garden on their one-acre riverfront lot. They needed thousands of tons of uncontaminated fill dirt and rock to level and stabilize the property.

In 2017, Kokosing Industrial, the contractor for the Metro Sewer District's Lick Run sewer project on Cincinnati's West Side, offered to deliver and dump the material for free on the Bells' property.

But instead of getting clean fill dirt that complied with the Bell's permits and Kentucky state law, Kokosing sent them nearly 2,000 truckloads of contaminated black soil and sand removed from MSD's Lick Run work site, according to a federal lawsuit the Bells filed in April.

"It pisses me off to no end," David said. "We had such a good thing here."

In the lawsuit, the couple names Kokosing, MSD, the city of Cincinnati and two additional contractors for the MSD project -- ATC Group Services and Ashcraft Sand & Gravel Company -- as defendants.

The city of Cincinnati is responsible for the management and operation of MSD.

In December 2017, state environmental regulators conducted tests on samples of soil removed from the Bells' property.

Tests showed those soil samples contained levels of certain compounds the Environmental Protection Agency considers excessive for residential property, according to an investigation report by Kentucky's Division of Waste Management.

The investigation report focused on PAHs, also known as polyaromatic hydrocarbons. Some PAHs have been identified by the EPA as possible human carcinogens, although it's unclear how much of a health risk the Bells face from the contamination.

The violation notices required the Bells, Kokosing and MSD to install a silt fence at the base of the Bells' property to try to keep the contaminated soil from spreading or getting into the Ohio River, the primary source of drinking water for residents in the Tri-State.

The silt fence is essentially sheets of plastic near the ground stretched across the Bells' property. Stakes pounded into the soil keep them in place.

According to the Bells' lawsuit, Kentucky state regulators determined in March 2018 that the contamination on the Bells' property "posed an imminent threat to human health and the environment."

The state of Kentucky demanded that the Bells, Kokosing and MSD submit a cleanup plan.

The state of Kentucky approved the plan, but the Bells objected to it because they say it didn't require cleaning up all contaminated fill material and restricts how they can use the land after the cleanup.

The Bells' lawsuit says MSD, the city of Cincinnati and Kokosing knew -- or should have known -- that the solid waste left by an old metals plant at MSD's Lick Run work site was contaminated with heavy metals and other potentially harmful compounds and should not have been dumped on their residential property in a floodplain.

Each of the defendants deny they are to blame for the contaminated material being dumped on the Bells' land, although no one disputes the material is contaminated and that it came from the Lick Run site.

In a statement provided to the I-Team, MSD said "Kokosing delivered the material... to the Bell's property without MSD's knowledge or authorization."

MSD added that the Kentucky Department for Environmental Quality approved a cleanup plan for the Bell's property, but "the Bells are now refusing to allow the cleanup to move forward."

"Had the material been properly classified by MSD's consultant as contaminated, it would have been hauled to a licensed landfill and not the Bell's property," Kokosing's statement said.

ATC Group Services is MSD's environmental consultant on the Lick Run project and, according to the Bell's lawsuit, "was responsible for identifying and characterizing soil" at Lick Run and to "ensure proper management, handling and disposal of soil."

Ashcraft Sand & Gravel Company hauled the material to the Bells' property, then spread it across their lot, according the Bell's lawsuit.

All of the defendants named in the Bell's lawsuit -- MSD, the city of Cincinnati, Kokosing Industrial, ATC Group Services and Ashcraft Sand & Gravel -- filed motions to dismiss the case for various reasons.

U.S. District Judge David Bunning has not ruled on their motions.

ATC Group Services and Ashcraft Sand & Gravel Company did not respond to requests for comment emailed to their attorneys.

In addition to a complete cleanup of the Bells' property, the couple's attorney, Jeff Sanders, believes the Bells deserve to be paid damages for the contaminated material dumped on their property and the disruption and stress the ordeal caused them.

"Do the Bells deserve compensation? Absolutely," Sanders said. "Yes. For what they've been put through for the last two years plus."

"They don't care," said Wendy as she and David stood together overlooking the scenic bend in the Ohio River next to their property.

"They have shown no concern. No 'I'm sorry.' Nothing."