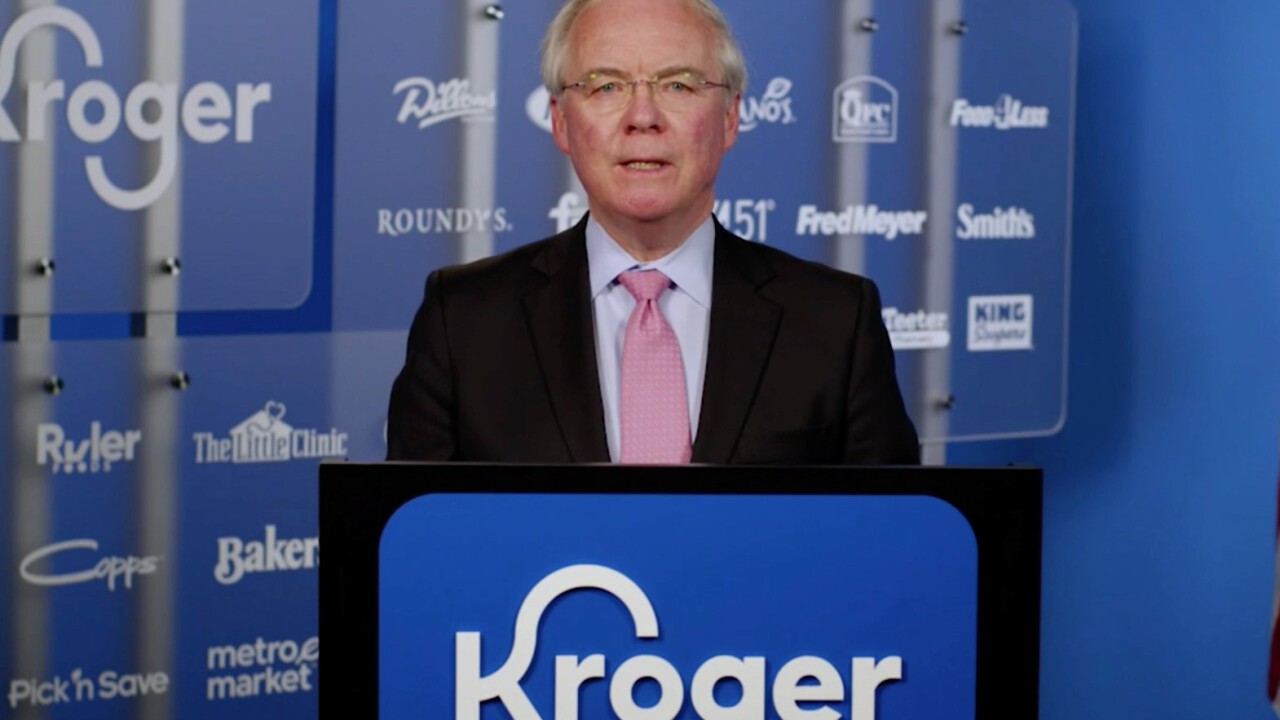 CINCINNATI — First came "hero pay." Then a "thank you" bonus.

Now, Kroger employees will have to be satisfied with gradual increases in wages and benefits.

CEO Rodney McMullen told the WCPO I-Team Thursday that Kroger will not re-instate the popular hazard-pay benefits it announced in March and continued into June.

This despite continued calls by union officials to bring back the $2-per-hour wage boost that Kroger and other grocery chains had been paying their essential workers.

“We stand with @UFCW President @Marc_Perrone and demand that supermarket chains such as @kroger bring back Hazard Pay for these #EssentialWorkers https://t.co/lnyFwqoFmX #COVID19

Kroger held its annual meeting Thursday, an event in which McMullen usually fields questions from local reporters. This year, McMullen agreed to talk by phone, telling the I-Team that the company will see some permanent changes from the global pandemic that caused food shortages, surging revenue, binge buying and changes in consumer spending habits.

Kroger's local employment increased 33% to 20,000 since the pandemic began, while the company hired 100,000 people nationwide.

McMullen expects Kroger’s total employment — which peaked at 560,000 — to remain above 500,000 going forward. He also expects digital sales to remain at higher levels than the company achieved prior to COVID-19.

And he believes the company will benefit from a permanent shift toward eating at home.

“What we’re finding is people enjoy cooking more than they thought they would — at least, that’s what they’re telling us,” McMullen said. “They especially enjoy doing it with their kids, because it gives you a reason to spend time together. If your kids are happy, you’re happy.”

McMullen also foresees a permanent shift towards higher wages, even if it doesn’t come in the form of hazard pay.

“We had planned on incrementally investing $500 million a year in wages,” he said. “This year, that’ll end up being $800 million, and that’s brought our average hourly rate to higher than $15. When you include the value of our benefits, that takes it up north of $20 an hour.”

McMullen said Kroger spent $830 million on temporary wage and benefit adjustments in the first quarter, which ended May 23.

“We had the initial huge pandemic buying stock-up, and we were having our associates working around the clock,” McMullen said. “Now, we’re investing a lot in terms of (extending) our emergency leave program. We’re also continuing to invest aggressively in terms of safety and protection as we learn about it, providing masks for our associates and those things.”

On the topic of wages, McMullen said Kroger will not join the ranks of companies cutting pay as one way of coping with coronavirus.

As the I-Team previously reported, Kroger is one of 19 local publicly traded companies that have not announced coronavirus pay cuts for executives. Its SEC filing on pay says “certain aspects of our compensation programs may later be revised or modified once the compensation committee has had an opportunity to fully evaluate the impact of COVID-19 on our business.”

McMullen said Kroger is not in the same predicament as the 600 U.S. companies that have so far announced pay cuts for top executives.

“We’re in the hiring mode as opposed to furloughing,” he said. “You obviously feel bad for the companies that have to make those decisions and you feel really bad for the people directly affected.”

"Same store sales up 18% and operating profits up over 50% from the first quarter in 2019," he said. "I do believe Kroger can afford to continue the additional hero pay. The pandemic is not going away. Test positives continue to increase as does the risk to exposure."