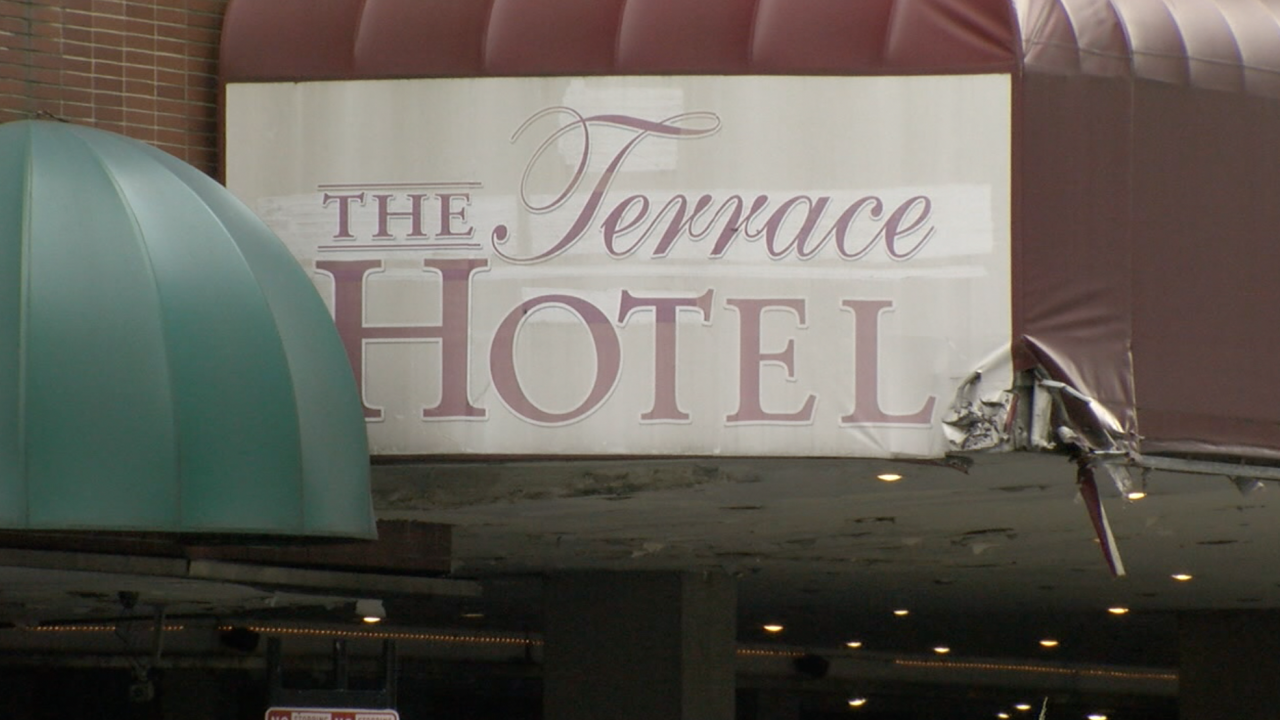 CINCINNATI — Nearly a year ago the city of Cincinnati filed a public nuisance complaint against the owners of a once-famous Downtown hotel, claiming it had become a “menace to public health, welfare and safety.”

As developers battle in court over who owns the Terrace Plaza Hotel and the city awaits trial on its public nuisance case, city officials say the iconic building is deteriorating and significant code violations remain.

"All of the conditions that led the city to file the public nuisance lawsuit, the falling of the concrete, the cracks, all those things still exist,” said Cincinnati Mayor John Cranley. "The current owner is clearly letting the building deteriorate and not investing anything.”

The 21-story hotel on West Sixth Street was one of the first modernist hotels in the nation and home to one of the most spectacular views of the city from the circular windowed Gourmet Restaurant.

The Cincinnati Historic Conservation Board designated the Terrace Plaza a local landmark in February 2019, but passersby only see a condemned building with boarded-up and broken windows. The building between Vine and Race Street has been vacant since 2008 except for three street-level stores, including Batsakes Hat Shop.

"All they got to do is fix it. You know, spend money. It's worthless,” said Batsakes owner Gus Miller, who has sold hats to presidents and celebrities for 69 years.

Miller lost 159 hats and four autographed baseballs when water flooded his store through the ceiling and soaked his carpet. But he said the money he received from the building owner’s insurance company isn’t enough to replace his stained carpet.

Now, since the building’s water is shut off, he said he is the only store in the building with a working bathroom.

“I’m going to stay here as long as I can and see what happens,” said Miller, who at age 87 doesn’t want to move his store to a new location.

The city’s public nuisance case is set for trial in July. If the building can’t be sold to a developer who has the money to renovate it, city solicitors will ask a judge to appoint a receiver to take over the building and force the repairs.

In October 2018 a chunk of plaster fell from the hotel and onto a passing car with two adults and a child inside. Metal and plaster smashed through the car’s windshield and embedded into the steering wheel, according to a Cincinnati Police Department accident report and a photo provided by the city.

“When people are almost killed driving on our streets and plaster falls off the building because they’re slum lords,” Cranley said in a February 2019 interview before the city filed its complaint. “There’s no question that will be Exhibit A in our public nuisance case as well as the mistreatment of Gus Miller at Batsakes.”

Now, nearly a year later, city officials say “significant outstanding code violations” remain at the building and the owner has refused to let them inspect inside it.

“CTA eradicated all of the city’s alleged violations and has spent a significant amount of money in the process of improving the property,” Geisen said. “CTA has gone out of its way to ensure that the tenants are comfortable in their space.”

A separate battle in federal court over who owns the Terrace Plaza stalled CTA’s plans to develop the property, Geisen said.

Indianapolis real estate developer Anderson Birkla sued in August 2018 to unwind the sale of the building, claiming that it had the first contract on Terrace Plaza when the past owner unlawfully sold it to CTA.

Birkla, who renovated the 580 Building on Sixth Street, wants to build apartments and a 500-space parking garage in the Terrace Plaza building.

"It's been a great frustration that we've had some folks from out of town who essentially, we think, just wanted to flip the property and make a quick buck and now they're in over their heads and here we are 18 months later with nothing done,” said Birkla’s attorney, Steve Goodin. "It would be a beautiful building right now with windows and a functioning parking garage if this hadn't happened. It's really kind of tragic in a way.”

But Geisen insists that his client is the “bona fide” owner of the hotel.

“In August 2018, CTA closed on the property, paid the purchase price and had the property transferred to its name," Geisen said. "Although the structure of the deal might have been complex, the simple truth is that CTA owns the property. CTA has plans to redevelop the property, but (the) baseless lawsuit has stymied CTA’s efforts. CTA looks forward to the opportunity to implement its vision for the property, which will be beneficial for the entire Greater Cincinnati community and the city’s tourists.”

The decision will be up to U.S. District Court Judge Michael Barrett, who may rule at any time on the breach of contract case.

Meanwhile a Brooklyn real estate investment company, The Battery Group, filed a foreclosure complaint in Hamilton County Court of Common Pleas against CTA in November 2019 for default on a $7 million mortgage loan to buy Terrace Plaza.

“We feel the same way now as when we made our loan in 2018 – this is a property in a fantastic location with considerable potential,” said The Battery Group’s general counsel, Hillary Jury. “We are confident that the right developer can turn the property around and we are actively working to identify an exit strategy that achieves this goal.”

TBG also filed a motion to intervene in the federal case, which launched an unusual legal twist.

Geisen is now asking judges to stay both lawsuits and instead allow a New York Rabbinical Court to decide the loan fight because both the lender, TBG, and borrower, CTA, are Orthodox Jews.

Other lawyers in the cases, including TBG’s lawyer, oppose the Rabbinical Court.

“We think it's frankly ridiculous,” Goodin said. “If the judge stays the case to let this rabbinical proceeding go forward … we’re going to lose another whole work season on moving this property along, and that would be a tragedy. In the meantime the building continues to deteriorate and moves closer to a possible condemnation.”

Meanwhile, Goodin confirmed that a deal is being negotiated that could move Terrace Plaza into Birkla’s hands by spring.

“There is a deal to be had here and we see the outlines of it; it’s just whether or not everyone else agrees,” Goodin said. “Our hope remains to be in the building by spring … We’re ready to go.”

If that happened, Goodin said, his client would immediately begin work on the building.

“We know that there will be significant demolition involved. We have no illusions about the condition of this property,” Goodin said. “Structurally, it's sound, the location is wonderful and there is a 500-unit-plus parking garage. It could really change how our city center feels and operates.”