Once the best hotel in Downtown Cincinnati, Terrace Plaza could be declared public nuisance 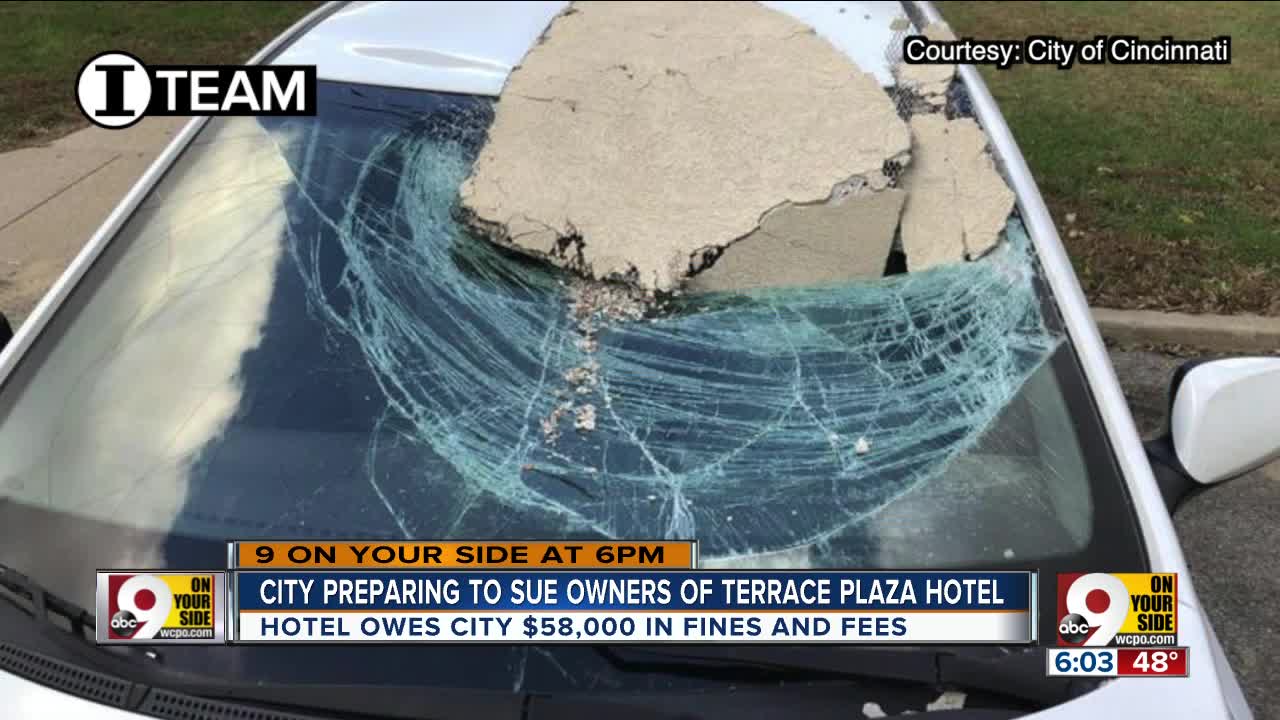 The city of Cincinnati is weeks away from filing a public nuisance lawsuit against the owners of a high-rise Downtown hotel that Mayor John Cranley says is a “public safety hazard.”

CINCINNATI — The city of Cincinnati is weeks away from filing a public nuisance lawsuit against the owners of a high-rise Downtown hotel that Mayor John Cranley says is a “public safety hazard.”

City attorneys are “actively preparing” their case against New York real estate investment firm JNY Capital, who bought the Terrace Plaza Hotel on West Sixth Street in 2018 and have allowed the building to deteriorate, Cranley said.

“The city has already threatened a lawsuit against this landlord, we have met with the landlord, and we are seeing if the landlord will make any remediation,” Cranley said. “But regardless we’re preparing a lawsuit.”

This is the latest in a string of troubles for the once iconic Terrace Plaza Hotel –one of the first modernist hotels in the nation and home to the one of most spectacular views of the city from the circular windowed Gourmet Restaurant.

The Cincinnati Historic Conservation Board designated the Terrace Plaza a local landmark on Monday. But passersby only see a condemned building with boarded up windows. The building between Vine and Race Street has been vacant since 2008 except for a few street-level stores such as Batsakes Hat Shop.

“The current owner was not responsible for the condition of the property at the time of its purchase,” Robin Miller, an attorney representing JNY Capital, wrote in a response to WCPO.

The building was “severely dilapidated,” when JNY bought it in August 2018 and reports that it, “has not stepped-up to correct the problems with the property simply are not true,” she wrote.

“The owner is deeply concerned about the condition of the property and, as a result, has engaged consultants, architects, and contractors to address the problems and safety issues of the building – beginning with the most critical safety issues,” she wrote. “Significant dollars have been spent by the owner to address the city’s concerns.”

But city leaders are frustrated with the condition of the building and the nearly $59,000 JNY Capital owes in civil fines and fees.

Loose plaster, structural defects, inadequate roofing, a rooftop cooling tower that needs to be removed and an inoperable fire alarm need “urgent attention,” city attorneys wrote in a Dec. 24 letter to JNY that warned of a lawsuit unless repairs were made.

In October a chunk of plaster fell from the hotel and onto a passing car with two adults and a child inside. Metal and plaster smashed through the car’s windshield and embedded into the steering wheel, according to a Cincinnati Police Department accident report and a photo provided by the city.

“When people are almost killed driving on our streets and plaster falls off the building because they’re slum lords,” Cranley said. “There’s no question that will be Exhibit A in our public nuisance case as well as the mistreatment of Gus Miller at Batsakes.”

Gus Miller lost 159 hats and four autographed baseballs, when water flooded his store through the ceiling and soaked his carpet.

“I would like to see these people who bought the building spend money to put it back in,” Miller said. “All they got to do is spend money and fix the place.”

Miller, 85, has made custom hats for presidents and celebrities for 67 years. He remembers when the Terrace Plaza was the best hotel in the city.

Now Miller is thinking about moving his famous hat shop to a new location. His business is at a standstill, although it remained open, since he wasn’t able to steam new hats for three weeks while the building’s water was shut off. Miller told a WCPO photographer on Tuesday the water is back on and he's now able to steam new hats once again.

Miller believes the water pipes froze because the owners did not turn on the heat in the upstairs vacant building during the January cold snap.

“If they don’t do something on the safety side throwing the heat on in the building, I’m going to look for another place to move,” Miller said.

Once the city prepares evidence for the public nuisance lawsuit, it will turn it over to Hamilton County Prosecutor Joe Deters to file the case.

“We don’t use it a lot. But when you have disasters like this, we will use it,” Deters said. “And I told the mayor that we’ll use it for him.”

This wouldn’t be the first time that Deters used his powers to clean up a Downtown property. Deters sought to have the Metropole Apartments, a downtown trouble spot on Walnut Street, declared a public nuisance in 2006. The low-income apartment building had been the site of repeated police runs.

The building was eventually purchased by the Cincinnati Center City Development Corp. and converted into the 21c Museum Hotel.

“We’ll file a complaint. We’ll get an injunction to shut it down, and then they’ll have a hearing within 30 days to see if it’s a permanent injunction,” Deters said about the Terrace Plaza.

After years of neglect, the Terrace Plaza Hotel is now getting attention from all sides.

He pointed out the building’s unique features - it was the first hotel in the world to create a sky lobby, and the first in the nation with a fully automated elevator system and a television in every room.

“I believe that the building can be revitalized without compromising its historic character, and believe it is in the city’s interest to do so,” said Mann, who submitted an application to the Historic Conservation Board.

The biggest issue with the building is the seven windowless floors forming the base of the offset hotel tower. The brick facade once housed department stores.

But what will happen to those windowless floors now? And will tenants want to rent office space there?

“We can’t keep that building empty. I do think it needs windows, you’ve got these six floors bricked in,” Cranley said.

If the hotel were designated as a historic property, it could limit what developers can do to it, Cranley said.

“I think that we need a property owner who can reimagine the building, open up the windows and do apartments or condos or a hotel again,” Cranley said. “But right now it’s just a public safety hazard.”

Installing windows in the lower floors would not only destroy the architectural significance of the building, but also add $30,000,000 to redevelopment costs,” Mann said.

Since the city's Historic Conservation Board voted to recommend designating the building as a landmark on Monday, it now goes to the planning commission and then Cincinnati City Council for a vote. That process could take six months.

"With the right development approach, the building will allow people to appreciate this important history for a long time. That's what landmarks do, and that's why it deserves landmark designation."

“Council Member Mann’s recent initiation of the process to designate the property a local historic landmark may serve to derail the owner’s development of the property,” Miller wrote in a statement to WCPO.

In the meantime, an Indianapolis-based real estate developer who had plans to buy the Terrace Plaza, is suing in U.S. District Court in Cincinnati to unwind the sale to JNY Capital.

Lawyers for Anderson Birkla Investment Partners filed a motion for summary judgment in December, asking U.S. District Court Judge Michael Barrett to unwind the sale that they believe they had first claim to.

Attorneys for Birkla also filed a motion on Feb. 17 to inspect the hotel after recent damage reports.

“Media outlets have recently reported on flooding incidents and ongoing deterioration of the subject property,” wrote Steven Goodin, an attorney for Birkla, who added his client may also file a claim for waste.