Against the wind: Former Bengal Doug Pelfrey kicks for a win in affordable housing 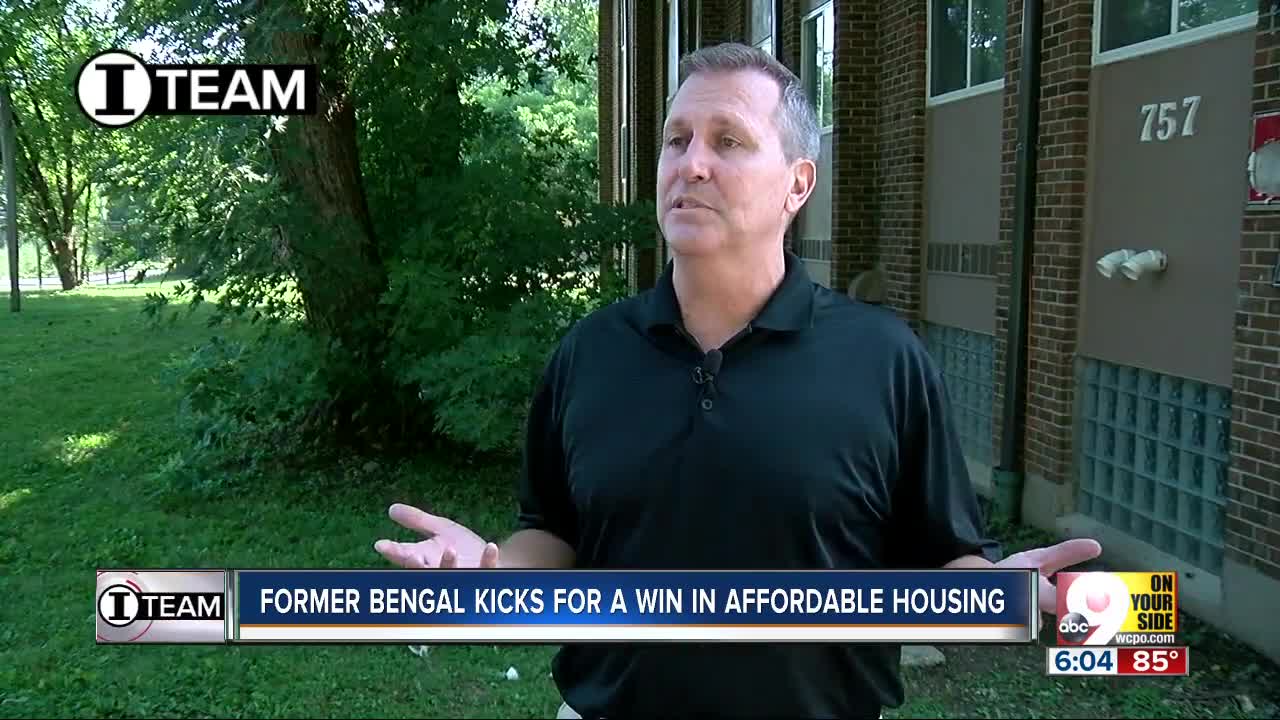 Doug Pelfrey said his goal is to help renters advance toward self-sufficiency through partnerships with nonprofits that he’s worked with since leaving the Bengals 20 years ago.

CINCINNATI — Long before he kicked 153 field goals in the NFL, Doug Pelfrey failed to win the starting job as place kicker for his freshman football team at Scott High School in Taylor Mill. So his dad sent Pelfrey to a three-day kicking camp in the offseason, and he was “kicking 50-yarders” by the end of his sophomore year.

That lesson of perseverance has come in handy for Pelfrey’s current job as a landlord. Although he admits to “missing some kicks” in a five-year quest to rehab dozens of rundown properties in Avondale, Walnut Hills, Roselawn and Northside, he’s convinced he will achieve his original vision for Blue Tide Partners LLC.

“I’m not in this to be a landlord,” Pelfrey said. “I’m in this to change people’s lives.”

Pelfrey said his goal is to help renters advance toward self-sufficiency through partnerships with nonprofits that he’s worked with since leaving the Bengals 20 years ago.

“A lot of the neighborhoods where people consider them challenged areas, there are good people who want to live in a safe, secure area,” he said. “That’s what we’re trying to provide.”

'Not your typical landlord'

Founded in 2011, Blue Tide is a Covington-based company that owns about 50 properties with 750 apartment units, mostly in Hamilton County.

The I-Team has been looking into the company since April, when our research on a hotel-inspection story revealed one of its properties had more health-code violations in 2019 than any other hotel property in Hamilton County or Northern Kentucky. Blue Tide bought Carrousel Inn & Suites in 2018 to convert it to housing for veterans but couldn’t secure zoning approval in Sycamore Township. Hamilton County’s health department threatened to revoke its hotel license in March after repeat violations for bed bugs and rodent droppings. The case was resolved by June, when inspectors noted no infractions and no guests in the hotel at 8001 Reading Road.

Since last November, Hamilton County’s Treasurer sued to foreclose on four Blue Tide properties for a combined $14,000 in unpaid taxes. All four cases were dismissed after Blue Tide reached settlement agreements with the county.

The city of Cincinnati filed a nuisance-abatement lawsuit against Blue Tide in May 2018, alleging nine of its properties were “in poor repair and constitute a threat to public health, safety and welfare.” The list of problems included broken windows, water damage, defective fire escapes and a failure to board up vacant buildings to prevent access by vagrants. The city settled the complaint in July for $41,000 in past due fines and fees. It was the second settlement since 2016 for the properties, and it came with an unusual requirement.

Blue Tide must provide a list of tenant names to Cincinnati police at eight of its properties on a quarterly basis. City officials wouldn't answer questions about the agreement. Pelfrey said it's intended to improve tenant safety.

“I am not your typical landlord,” Pelfrey said. “Do we have the exact template of how to do it? No. Have we paid more than what we should have? Yes. Is it harder than it should be? Yes. But at the end of the day it’s worth it because you see, some of those tenants, that you are changing their lives.”

Debbie King lives in a Blue Tide property on Ridgeway Avenue, which she remembers as one of Avondale's most dangerous streets, full of drug dealers and violent crime.

King is recovering from congestive heart failure that put her into a coma four years ago and left her with one healthy lung. She said Blue Tide's building manager helps her arrange rides to medical visits and makes sure the hallway near her unit is disenfected weekly.

Pelfrey said Blue Tide is close to refinancing its debt to enable new investments in existing properties and new acquisitions. About half of its 750 units are occupied, with roughly 200 more expected to be filled by year-end. The company acquired most its properties after 2013, when it shifted its focus from single-family housing to larger apartment properties in some of the city’s roughest neighborhoods.

“If they weren’t involved, those projects wouldn’t be happening,” said James Ritter, a principal at Government Solutions who is working as a consultant for Blue Tide. “I don’t see anybody rushing into some of these economically challenged and distressed neighborhoods to pour private capital into them.”

Ritter arranged a tour of Blue Tide’s properties to demonstrate the work it’s accomplished so far. One of the properties — 1636 Summit Road in Roselawn — had 450 drug needles inside when demolition contractors cleaned it out. Pelfrey said his contractors were threatened at gunpoint. Blue Tide paid $58,000 for the property in 2014 and spent more than $500,000 to convert it to 15 one-bedroom units.

The I-Team also visited properties at 759 Ridgeway Avenue and 784 North Fred Shuttlesworth Circle in Avondale, 7477 Reading Road in Roselawn, 4200 Colerain Avenue in Northside and 4568 Paddock Road in Paddock Hills. All properties were under construction, with new windows and air-conditioning units visible from the outside, new drywall and flooring evident on the inside.

“We’re not slumlords,” said Tom Miller, who co-founded Blue Tide with Pelfrey in 2011. “When we hear that people think we’re slumlords it’s very upsetting to us because we really want to help people improve the quality of their lives. We want to provide a quality product at an affordable price.”

“The reason I got out of banking was because honestly I felt like I couldn’t help the people I wanted to help anymore,” Miller said. “All the regulations tied bankers’ hands. I get that. We ran into that full-scale here. We thought we’d have no trouble getting rehab money and we ran into all kinds of trouble.”

‘We’re replacing just about everything’

The Ridgeway property is a prime example. Blue Tide paid $125,000 for the 42-unit apartment building at 757-759 Ridgeway in November 2014, just two months after the city filed a nuisance-abatement lawsuit against its former owner. The city alleged the building was “a haven for criminal activity,” with two shootings and 21 arrests for violence or drugs in the three years prior to the suit.

That case ended with a 2016 settlement in which Blue Tide promised to renovate not only Ridgeway but eight other properties. It had until June 2017 to arrange financing. By July, Hamilton County Commissioners authorized a $40 million bond issue that would have paid for renovations at Ridgeway and 17 other Blue Tide properties. But it wasn’t able to generate enough interest from bond investors to complete the offering.

By the following May, Hamilton County records show an affiliate of Columbia Pacific Advisors approved a $25.5 million mortgage for Blue Tide. The deal was announced in July 2018 as a loan to fund the “refinancing, acquisition and renovation of 647 multi-family units” in the Cincinnati area. Blue Tide has been using proceeds of that loan to renovate its properties.

Pelfrey said Blue Tide has spent about $2 million on Ridgeway, including a new roof, new windows and new air-conditioning units. The company installed 16 security cameras and lighting to monitor the parking lot and common areas. It also installed a perimeter fence to keep drug dealers from entering the property.

“We’re replacing just about everything that we have as fast as we can because we want to be a safe, secure property that’s not just the minimum standards,” Pelfrey said. “I want these kids to have the same opportunities that my kids have.”

Chris Douthit has been impressed by Pelfrey’s efforts in his two years of work as director of program for PRO Foundation Inc., a faith-based nonprofit that operates out of Blue Tide’s Covington headquarters at 812 Russell Street.

“I know they’re working to make them a lot better,” Douthit said of Blue Tide’s properties. "From what they were previous to where they are now, it’s a total change.”

“I believe in Christ with all my heart, so I’m always going to share the gospel,” Douthit said. “We also want to get everybody self-sufficient as well. We want them to have better lives. That’s the main mission in all this.”

“We announce to the police when we come to a neighborhood, ‘Hey, if you need anything come on in,’” Pelfrey said. “We try to host some cookouts, try to do some of those kinds of things because it’s very important that they’re engaged.”

Blue Tide’s settlement agreement with the city requires the company to sign “right of entry” agreements with the Cincinnati Police Department at eight of its properties and provide access to security camera footage when requested. It also requires Blue Tide to provide police with “the names of adult tenants and occupants” of those eight properties on a quarterly basis.

“I have never seen a requirement to turn over the tenant information on a quarterly basis to the police,” said attorney Mike Spillane, a partner at Cornetet, Meyer, Rush and Stapleton. He’s litigated hundreds of landlord-tenant disputes in the last eight years, and he said the arrangement “a little concerning” but probably legal.

“I think the landlord obviously needs to disclose that they’re doing this for all the tenants,” Spillane said. “I’d also be concerned of how the police are using this information. Are they using it only to protect the tenants that are there by trying to stave off any trespassers? Or are they using it to investigate the tenants living there to see if there’s anything like outstanding warrants on those particular tenants?”

The city of Cincinnati declined to answer questions about the use of tenant information collected by police.

“Due to this being an ongoing legal matter, we cannot comment on this situation,” said Casey Weldon, a city spokesman who contacted WCPO after we tried to reach officials in the city’s law department.

Turning over resident names is "not that uncommon of a request," said Charles Tassell, director of governmental affairs for the Greater Cincinnati Northern Kentucky Apartment Owners Association. "That usually follows when there has been problems at a property from non-residents. By the police knowing who actually lives there they can sort out people claiming to live there but who are actually they're causing trouble."

Miller said Blue Tide hasn’t provided any tenant names to police yet. He expects the company will notify tenants before they do. He doesn’t expect any backlash from the policy.

“Honestly, the tenants, I think that provides a little bit of comfort for them because they know we’re trying to look out for their best interest,” Miller said. “If they’re not wanting the police to be around, they’re probably not somebody that wants to live in one of our properties.”