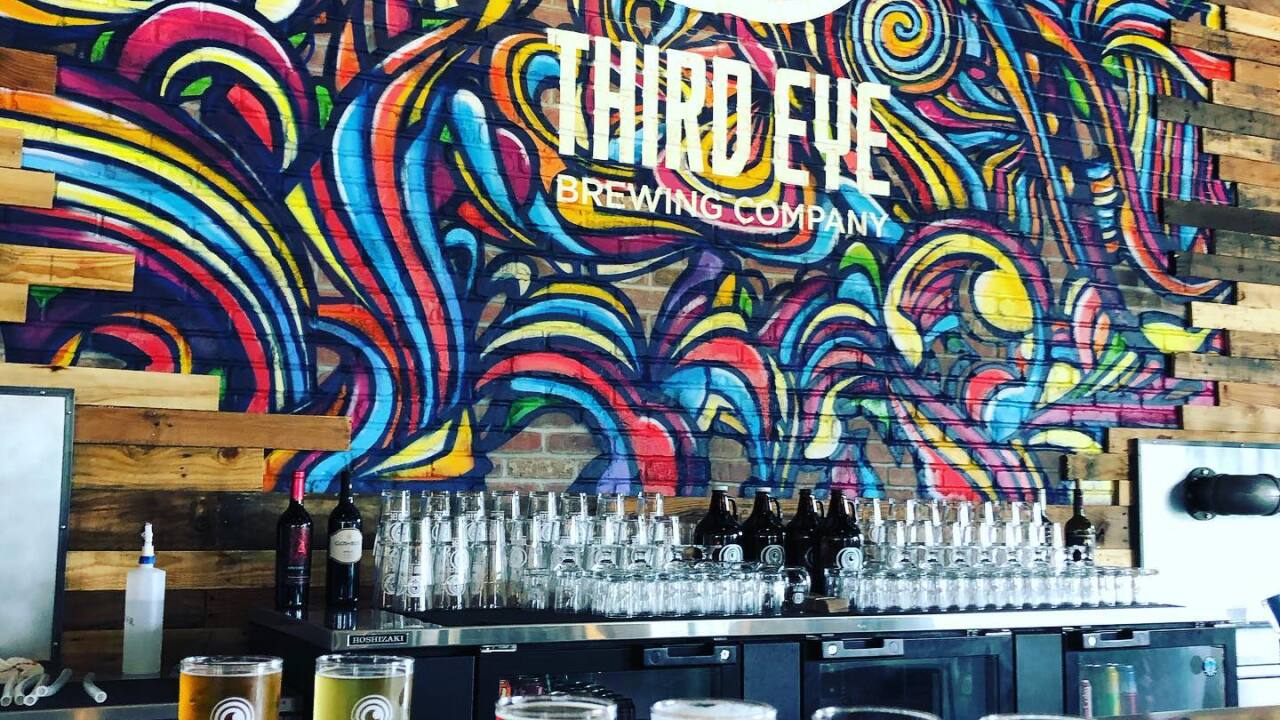 Third Eye Brewing Company will open with six beers on tap when it debuts in Sharonville on Wednesday.

The Sharonville-based taproom, located at 11276 Chester Road, will bring an eclectic vibe alongside fresh and funky beers to the suburbs when it opens to the public at 4 p.m. Wednesday.

The brewery, the brainchild of partners Tom Schaefer, Terry Krieg, Mark Buchy and brothers Tom Collins and Tim Collins, will feature experimental-type small-batch beers served alongside a sampling of Southern-inspired food. The team ties it all together in a 2,800-square-foot taproom that radiates bohemian appeal inside and out.

"We took a lot of what we liked about breweries in general and tried to incorporate as much of that here as we could: an open-air patio, open-air spaces, a rooftop, an indoor/outdoor bar," said Tom Collins, a longtime home brewer. "It's got a little bit of a groovy aesthetic but also an industrial feel with enough warmth that it still feels cozy. Back in 2015 (when this idea took off), you could kind of throw a brewery together in an office park somewhere. But we've watched over time, and the bar is getting set higher and higher. People want to have a really nice experience."

Third Eye aims to offer that experience in a variety of ways. The taproom features beer-hall type seating, with large windows, garage doors and an expansive bar, complete with a signature mural.

But the brewery's outdoor space also shines. A deck, covered patio and second-story upper level total about 3,000 square feet. Collins said he hopes to keep part of the space open to the public year-round.

"We wanted to have a large, open feel but we also wanted to create these different zones so it wasn't just one big empty warehouse," he said. "It's about having different spaces and different experiences."

Third Eye Brewing Co. will have up to 48 taps available. Six beers will be ready in time for its debut, including Jelly Brain, a milkshake IPA with pineapple and toasted coconut; Enlightenment, a raspberry American wheat; and Astral, a chocolate oatmeal stout.

"When you think about the third eye, it's about opening your mind to new possibilities and new ways of thinking," Collins said. "We obviously want to have a good time, but we also want people to try things they might not normally think about when they think about beer. There's going to be a lot of experimentation and creativity."

The brewery plans to add cider to its rotation, and a hard seltzer is in the more immediate plans. Third Eye, which employs a 15-barrel system, will eventually distribute as well as can its beers, Collins said.

"It's something you don’t find a lot around here," Collins said.

He thinks the brewery will draw customers from both Downtown and the surrounding communities. The team chose Sharonville after scouring Cincinnati for the best possible locale.

Third Eye, which is Sharonville's first craft brewery, opted to build in the Northern Lights District to capitalize on the mounting momentum there. The facility sits across from the Sharonville Convention Center, which the city is looking to expand, and next door to a future Delta by Marriott hotel, a growing brand that will be a first for the region.

City officials said Third Eye makes for a welcome addition to the corridor.

“This brewery is a transformative project for the Northern Lights District," Chris Xeil Lyons, economic development director for the city of Sharonville, wrote in a 2018 annual report. "It will be a true destination experience for regional beer lovers as well as for those visiting our city."

While it's certainly an unstable environment to launch any new business, Third Eye Brewing Co. will start slow, Collins said. Third Eye's opening was delayed nearly three months due to the COVID-19 virus, but the team has implemented several restaurant safety protocols to keep staff and patrons safe. Collins said the brewery could easily shift to carryout or delivery if necessary.

For now, Third Eye will open for lunch and dinner, 4-9 p.m. Wednesdays and Thursdays, noon-11 p.m. Fridays and Saturday and noon-7 p.m. Sundays. There are plans to expand operations as business allows.

"It's been crazy. Obviously it's not the way we wanted it to be. But everyone's dealing with this. This hasn't been unique to us," Collins said. "We've got a very humble team. We're very fortunate to have the folks we have. And we're ready."